I was walking through random streets of Chicago and found myself diverted to an underpass in the street. I was trying to make my way to the famous Wrigley building which from the distance looked like one of the most interesting buildings in the Chicago skyline.  The underpass was really dark and actually not very clean so I was hurrying my way through it since I wasn’t sure what to expect down there. I had already encountered scores of rats on one of the less walked paths along the river and to tell you the truth it kind of scared me.  As I was walking through, I saw a pretty non-descript place – looked like a bar – so I wasn’t paying that much attention. Well, that is until I spotted a small sign on the top of the bar that said ” Cheezborger, Cheezborger, Cheezborger. No Pepsi – Coke.”.  This was no bar.  This was the actual hamburger joint that John Belushi made famous in one of the most memorable Saturday Night Live Skits of all time.  This is the original, treat you bad restaurant that inspired other copycats like the Soup Nazi on Seinfeld. I remember when I was a kid that skit was one of the first times that I saw comedy and I remember how funny it was. I snapped a picture of the place but I didn’t have time to head in since I had to get back to work and didn’t have enough time to really take a look inside.

Later in the week, I headed back with my friend Georganne to have a look inside and try the hamburgers. I really needed to experience this place that apparently was started in 1934.  We headed in side and it was as you might expect – just a hole in the wall burger joint.  That just happens to be my favorite kind.   They really only have a few things on the menu – cheeseburgers, potato chips and coke.  I went up to order a little apprehensively since I wasn’t sure if they were going to scream at me for ordering a hamburger without the cheese.  I mean this place was founded on a tradition of cheeseburgers and they probably would not take kindly to me deviating from the course.  I placed my order for a hamburger and a COKE putting the emphasis on the word coke since I wanted them to appreciate the fact that I paid attention to the sign which clearly said, “No Pepsi, Coke”.  The lady at the counter then threw me for a loop because she said, no single burgers only double burgers.  My mind raced to try to determine what she was saying. I went up with a script of what to say and she was clearly hitting me with a decision that was out of left field.  I repeated back my order for a Hamburger and coke thinking that would answer the question.  She retorted a little louder pointing the grill behind her – no SINGLE burgers, only DOUBLE burgers.  I guess her pointing the grill kicked my mind into gear because I realized that she was saying that they only do two hamburgers on a bun, not one. Needless to say, I was locked in now.  A crowded line had formed behind me and everyone was watching to make sure I could place this order without choking. My strategy became to just agree with everything and start handing over cash.  I just had to get through this with my dignity intact.     It was quite an experience.  As I finished paying, I breathed a sigh of relief and I heard the lady behind me who was now in placing her order say to the cashier, “Now I’m not sure if I can say this correct and everyone is going to laugh but I will try.  I would like a CHEEZBOIIGER”.  And she said it just like that.  She said it a little like Elmer Fudd.  The cashier lady turned to her and said, “No single cheeseburgers, only DOUBLE cheeseburgers”.  And the cycle repeated itself.  I realized that this must go on all day in the is place, and it’s what keeps people coming back for more.

Well the hamburger was fantastic. It was really thin and you basically have to put all of your own condiments on it which are sitting next to the counter – lettuce, tomato, onion, pickle, ketchup and mustard.  As you eat your hamburger you can sit in one of the booths which are lined with old pictures from the 70’s of all the stars and celebrities that came in this place.  Another thing I discovered while I was browsing the walls is that the owner of this place was the same guy that brought a goat to the Chicago Cubs game and has cursed them to this day of ever winning a championship. What an amazing place and an amazing burger. 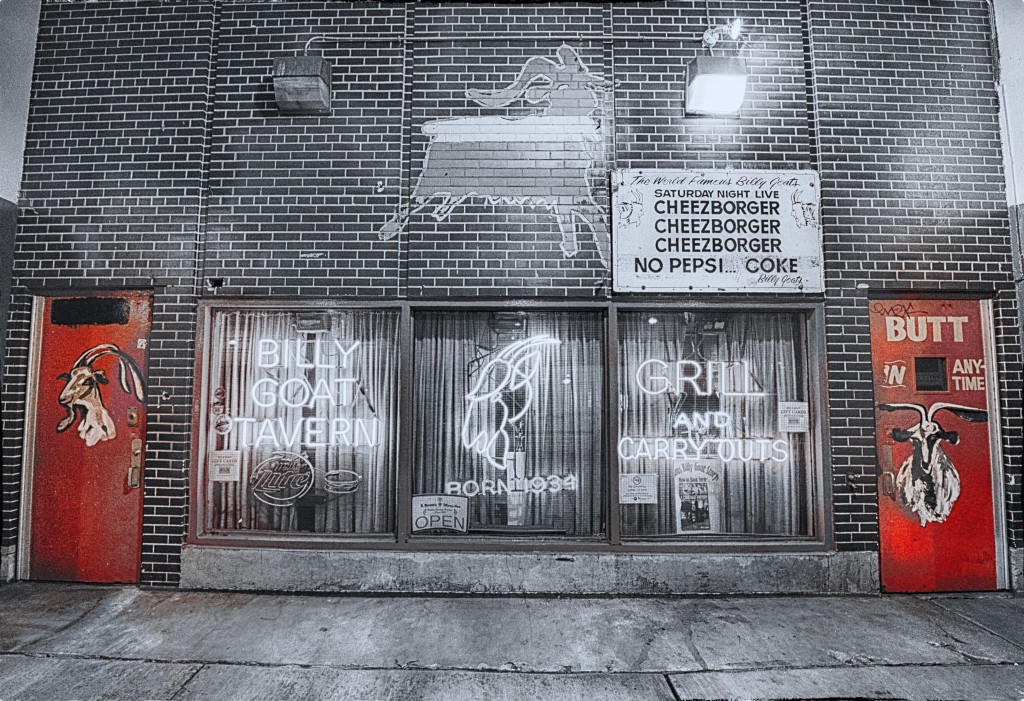