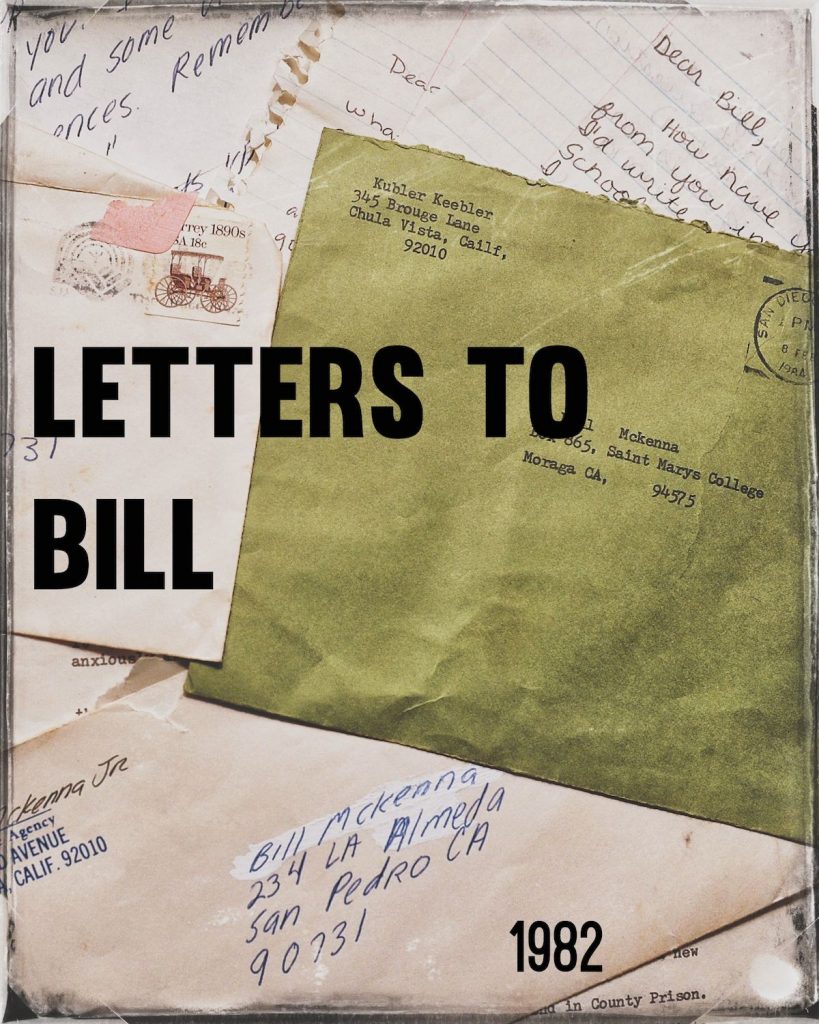 I got home and found an envelope filled with letters on my coffee table.  They were old letters, some of them typed and some of them handwritten.  The letters were ones that Bill had saved for years and was dropping them off so I could have a look.  Some of them were written by me and some written by my sister Mary.

The letters were written between 1980 and 1984.  We were in High School, Bill had just left for College.  The letters reveal the funny, the awkward and at times touching side of growing up. Seeing and feeling the letters brings back memories and a bit of nostalgia.  Does anyone “hand type” a letter to brother and send it anymore.  I doubt it.

The Most Valuable Citizen Award

The first letter, hand-typed by my mom’s old electric 19070’s typewriter reveals that Bill has won the award for most valuable citizen of Chula Vista after being nominated by Mike Keegan.  His award?  A pair of brown cords (a favorite of my Dad), or A weekend at home or County Prison (whichever her prefers) 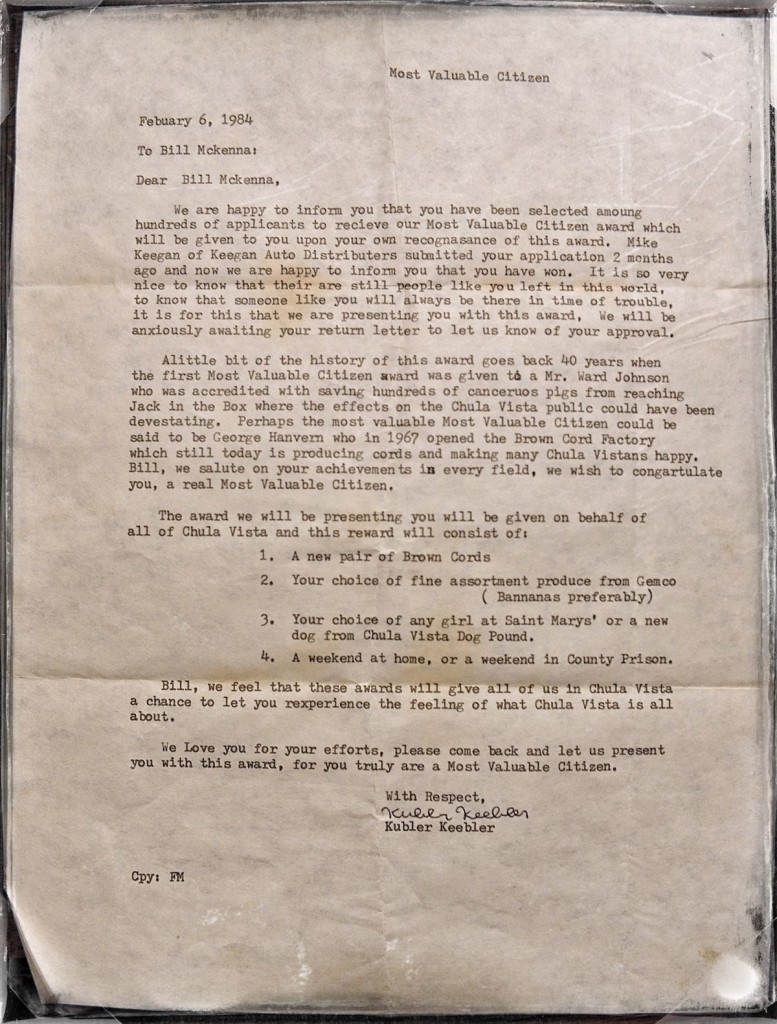 Another letter, again hand-typed was obviously me trying to show off my barely capable typing talents.  I sign-off quickly, not because I am a terrible typer but because Bill wouldn’t want to read a letter from some “Stupid Kid” as I put it. 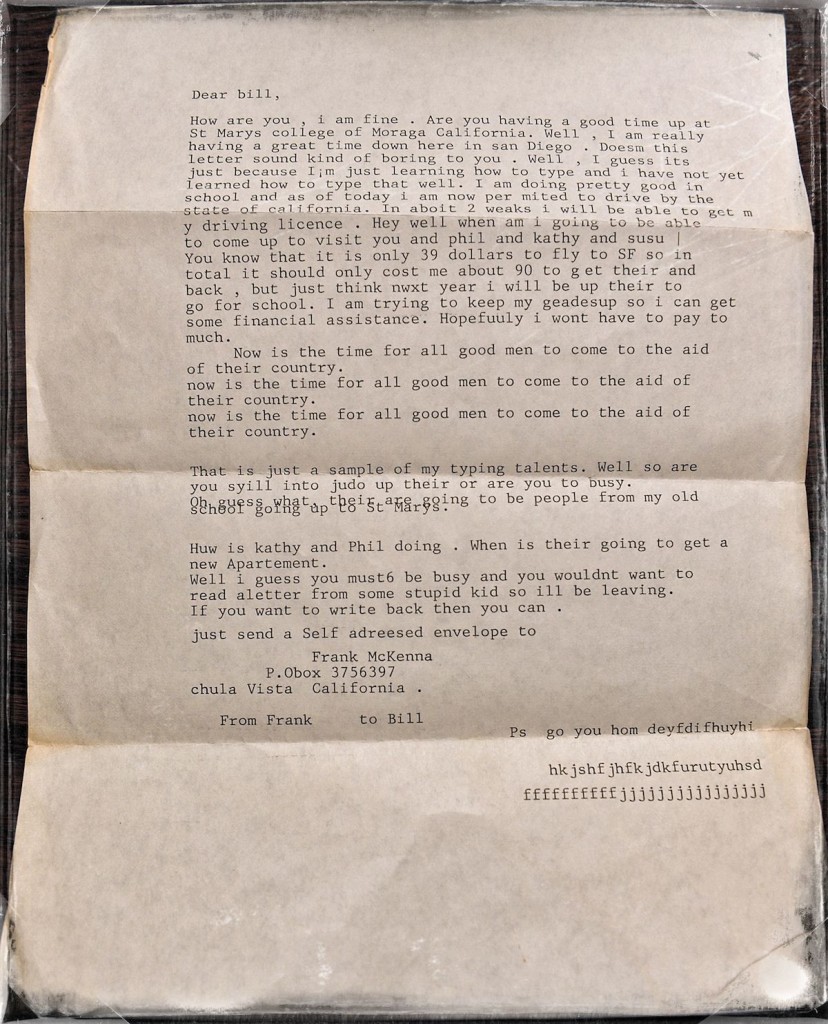 I do remember writing the letters which were long and went on and on.  I was homesick and the letters were a way of being back home.

In this letter I write, “I am still trying to figure out if I will stay here all year”. But that was a lie because I had already called my Dad several times begging to come back home and that was not an option.  I was going to stay the whole year, period. 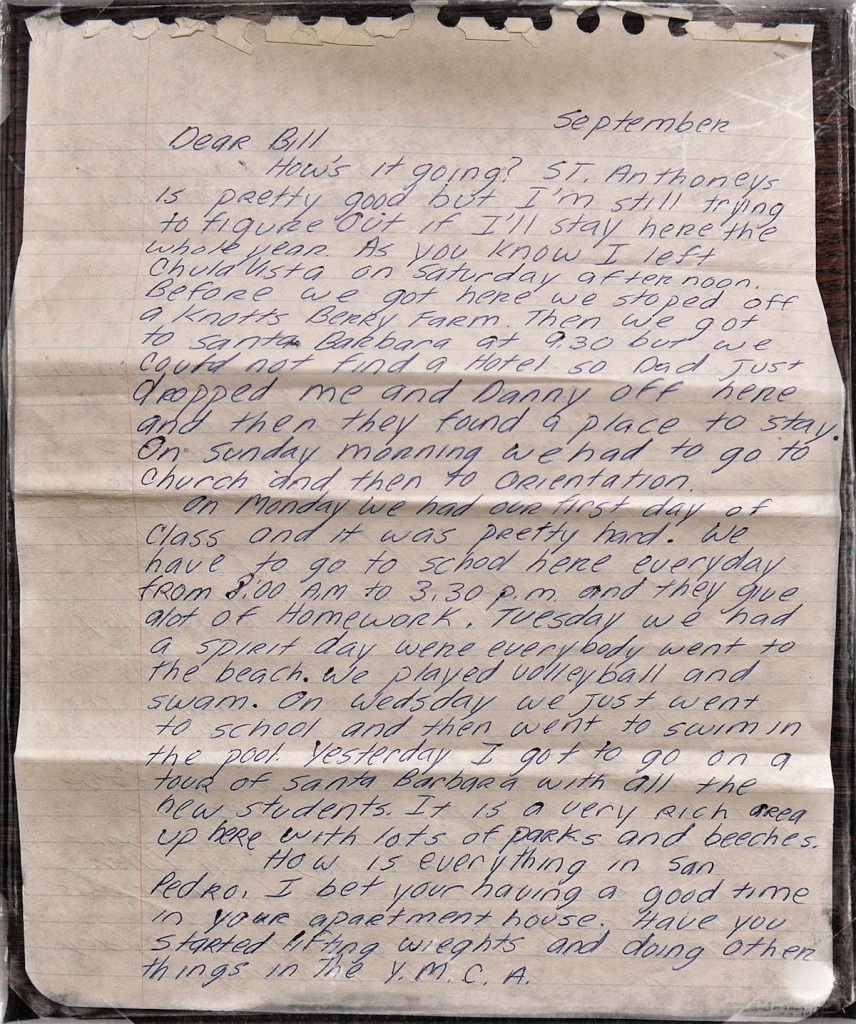 Are you almost a brown belt Bill?  I asked him that in this letter.  He went on to become a Black Belt in the coming years. 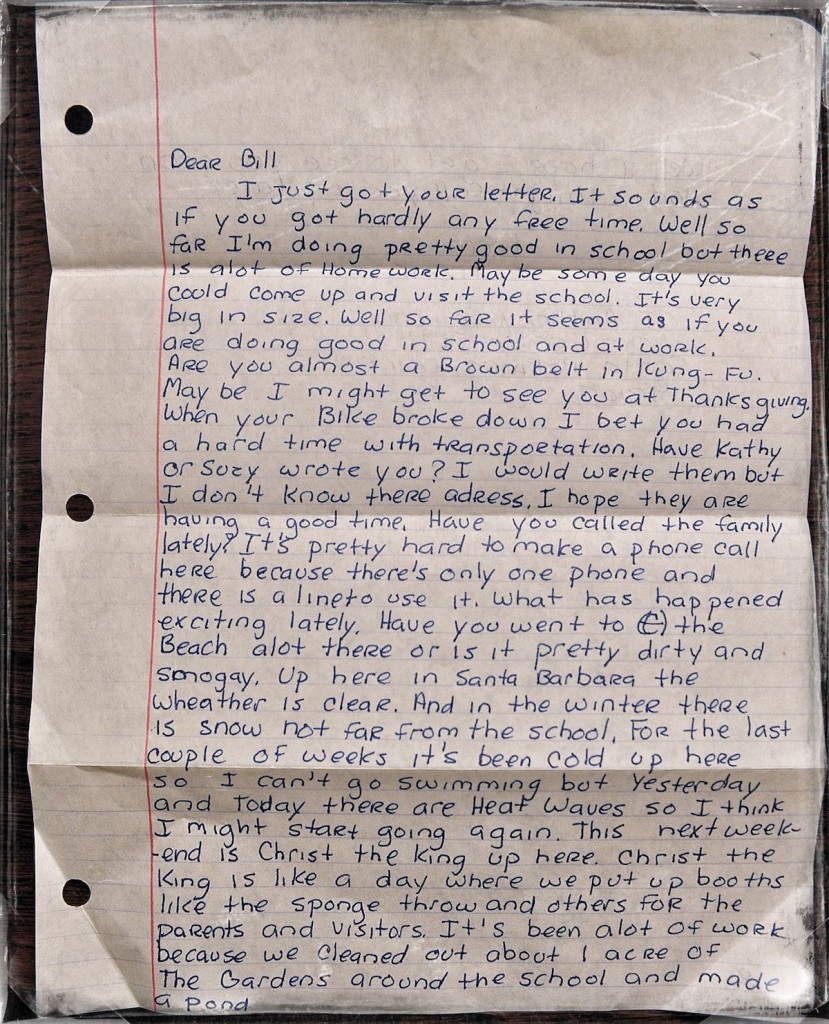 I’m up to benching 80 pounds now!  I thought this would make him proud of me.  I inform him that there are a lot of Low Riders in the school.  And again, I subtly ask if he would ever be possibly interested in visiting me.. perhaps? 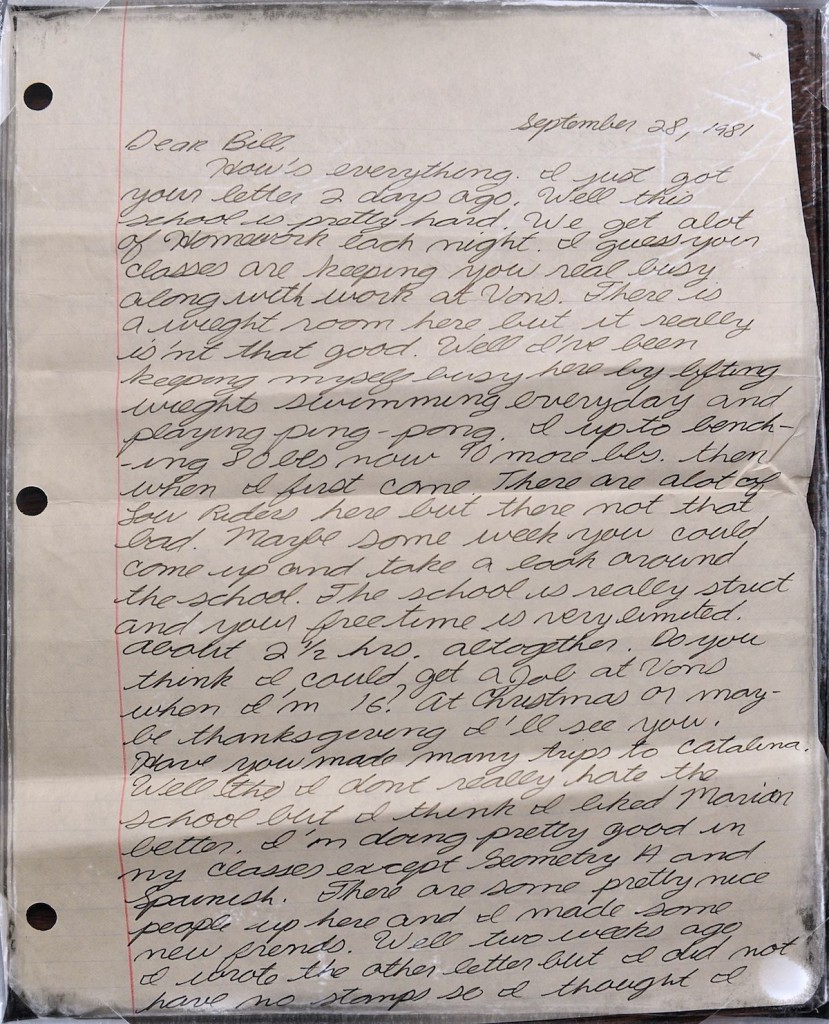 This one is from Mary.  She gives Bill a back-handed compliment by informing that, “Frank is trying to act just like you- You’re his hero.  He goes around lifting weights, looking at himself in the mirror and popping zits”.   This was completely true.  Apparently Patrick was doing the same. 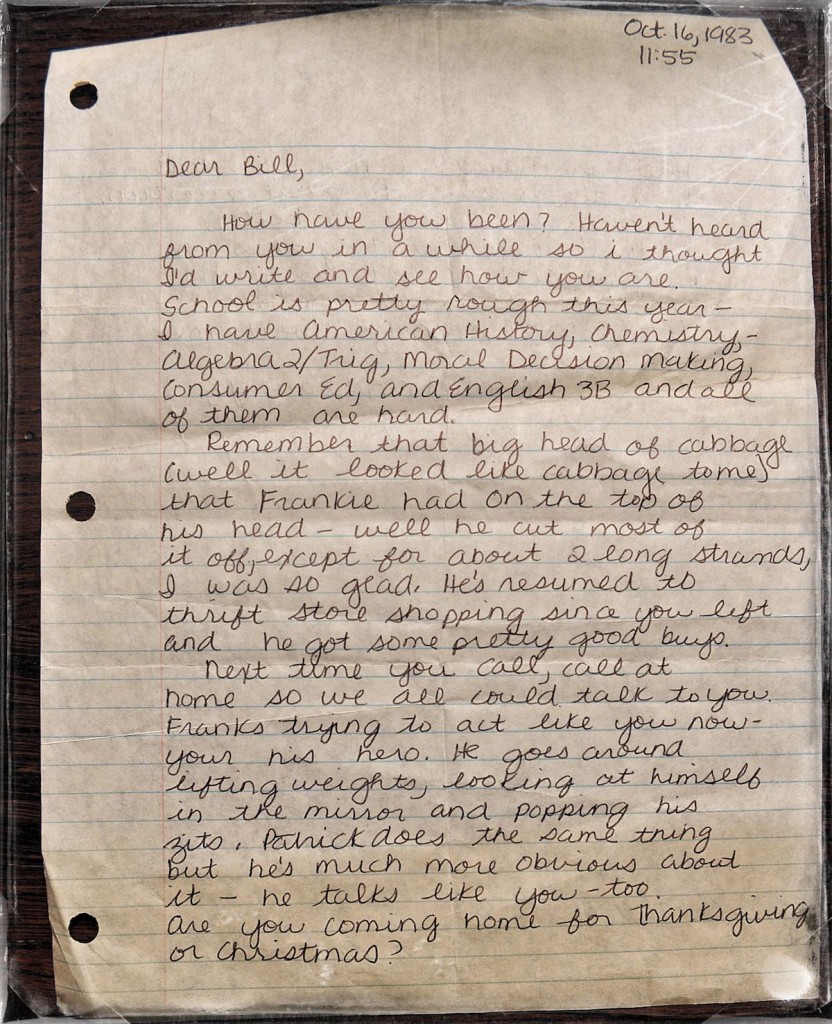 Reading the letters brought me back to those days.  It was interesting reading these letters 30 years later.  I’m older now.  I’m much different now, but fundamentally the same person.

I was enormously shy and lacked confidence in High School.  I felt out of place almost everywhere which I suppose is common in High School.  I longed to be more like Bill.  He was confident, athletic and an extremely good fighter.  I started lifting weights and wrestling to be more like that but deep down, I stayed skinny and a terrible fighter – perhaps the worst in San Diego history.

Through the bad times of high school Bill was always my mental lifeline.  When Bill left for college, the letters were my way of staying connected to him.  I always believed  I survived those shy awkward years because he always made me laugh.  He was my mental life-line and I am so thankful.