I just got back from New York and had a chance to photograph Occupy Wall Street which is situated in Liberty Plaza of  lower Manhattan.   Since the first time I visited New York many years ago, I have always felt like it is one of the centers of the world where most progressive ideas in politics, fashion, food, media and public opinion are shaped and formed. If it makes it in New York, it can make it anywhere.  The Occupy Wall Street movement is an example of just that type of progressive thinking and the movement has perhaps grown faster than any other political movement ever and is now supported by close to 60% of Americans.

I have decided to photograph as many Occupy camps as I can in the next few months to help capture what I do believe will be one of the biggest populist movements in US history when all is said and done.  What struck me about Occupy Wall Street was how well organized and cooperative it was.  Everyone was working together feeding each other and even creating electricity by charging batteries with stationary bikes that everyone took turns riding.  The people in the park were very well informed and while everyone might have had there own take on the problem and what they wanted to see changed they all agreed on one thing – economic injustice. While I was there, I was asked to follow a small group of protestors and capture their march on Wall Street.  They all carried brooms and dust pans and where symbolically and literally sweeping the dirt off the streets up to the Stock Exchange.  They carried a bin of brooms and solicited others to join them along the way.  The group started off small but soon there were over 50.  The police noticed and pretty soon there was an armada of police following the protestors making sure that they did not take a single step out of line.  It was a very interesting day and as always I learned a lot. 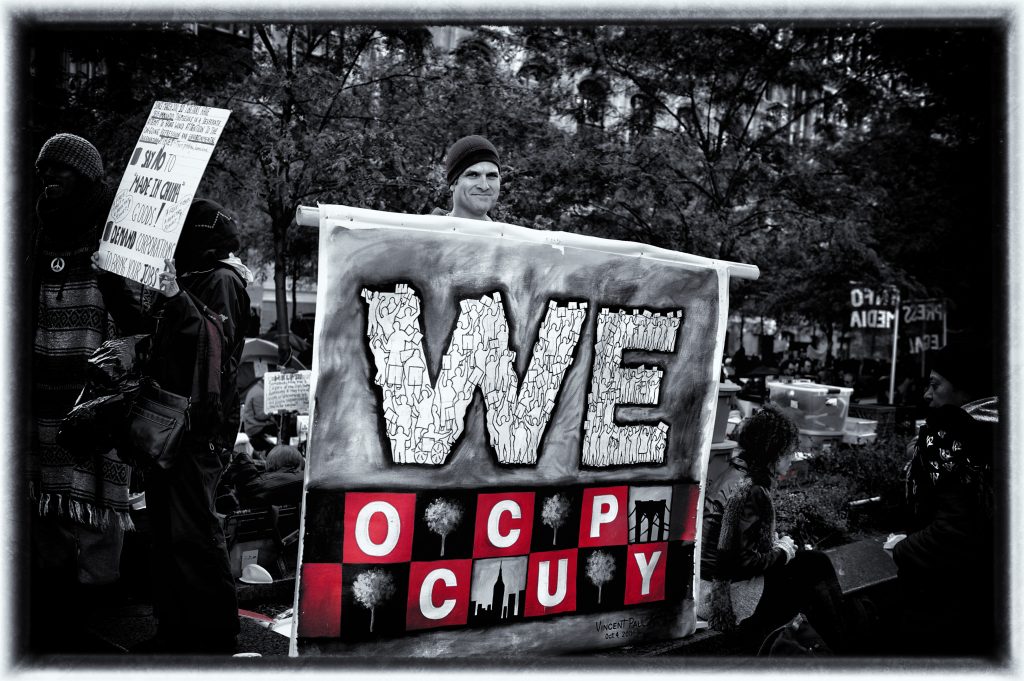