It opened in August 1960 and closed 50 years later.  Marian High School was the natural place that catholic kids in the South Bay would enroll after finishing grammar school in places like St Pious, St Rose or St Charles.  While it did close in 2007 the buildings still sit vacant, decaying and waiting; waiting to be demolished by whatever developer with whatever plan with whatever money it can be bought for.  I guess it doesn’t help that the economy tanked and the real estate market took a dive, but for whatever reason no one is buying and so the old school waits while the weeds grow up through the cracking cement.

I went to Marian during the 1980’s and made a lot of friends.  It was a small school but we still had all of the things a big school had. We had a cafeteria. We had football. We had basketball, track, wrestling and all the sports you could want.  We even had a marching band.  There were 10 of us in the rag tag band barely pumping out enough sound with our saxaphones, flutes and single snare drum to reach the stands when we played the anthem before games.  We spelled out the letter “M” to honor our school just like any other big school would; we just did it with 10 people instead of 100.  I know other high schools would laugh at Marian – we were small and they were big.  They had money – we didn’t. But we had something that none of them had. We had Matt Modine, the most famous of famous actors in the world. What other school had someone so famous such as that?

I went back to Marian this last week when I heard it might be sold soon and torn down for good. I wanted to capture some pictures of the old school before that happened and to see what had become of the place that I left over 25 years ago and never went back to.

Sir Arthurs cafe sits boarded up after serving tasty treats like frozen burritos and pre-packaged sandwiches.  At lunch, this was the spot. 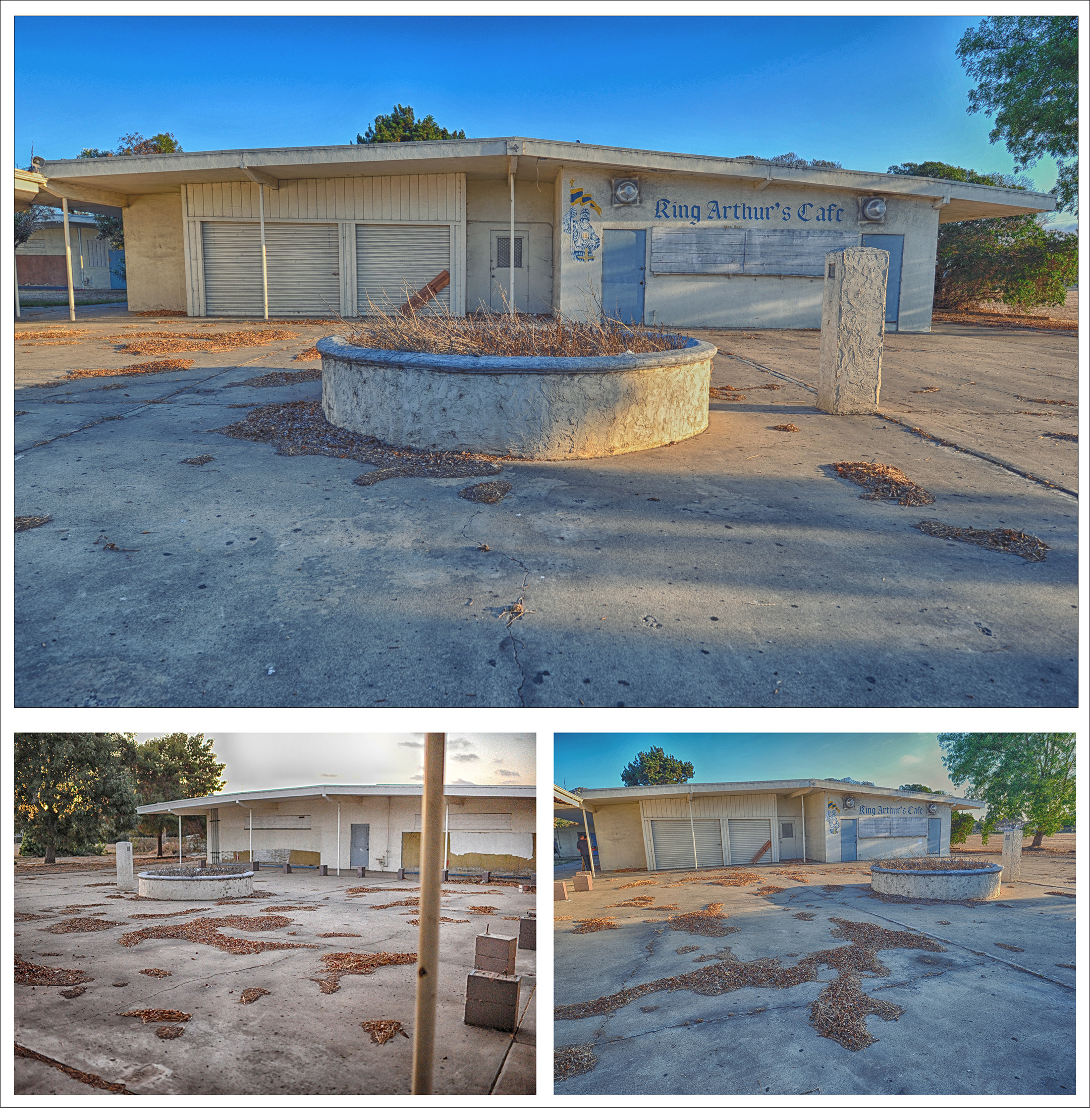 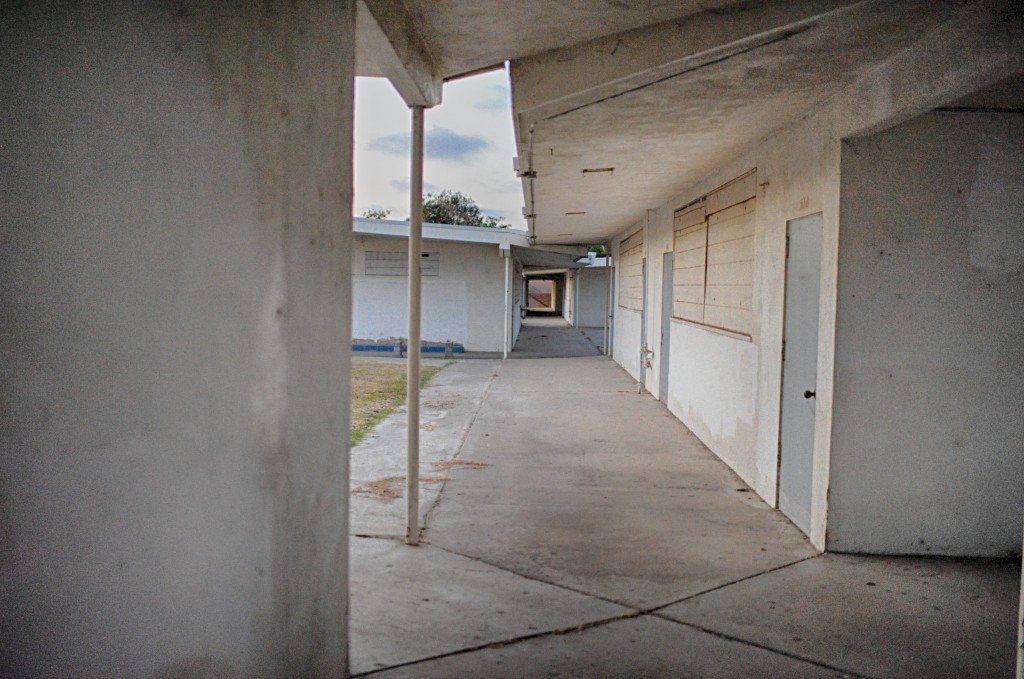 The lockers are gone. The benches removed. Stoners, rockers, sport guys, international students used to pick their spots in this quad and hang out during breaks. Where and who you hung out with defined your high school years here. 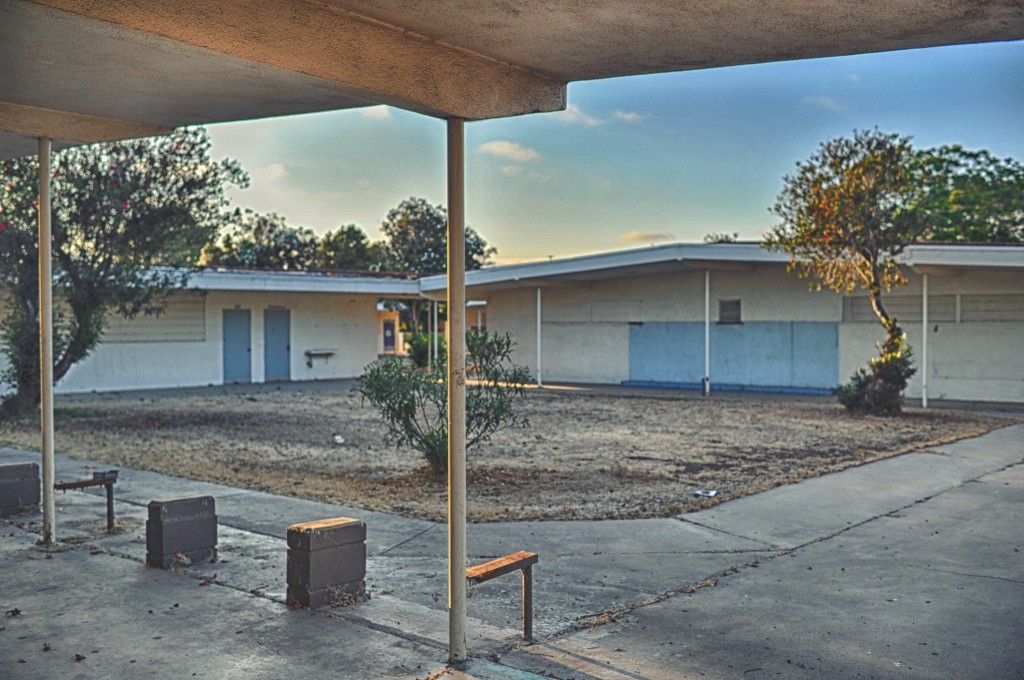 The counselors room, now home to ferrel cats sports a sign in the corner with the caption “Natural High” 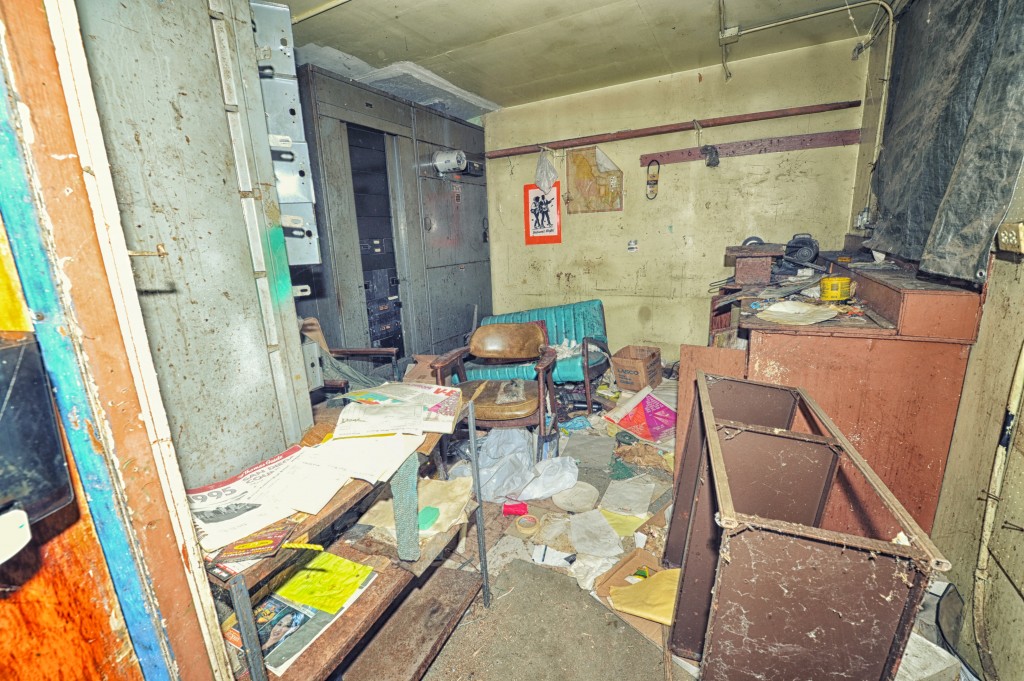 This source of inspiration did not work on all Marian high schoolers. 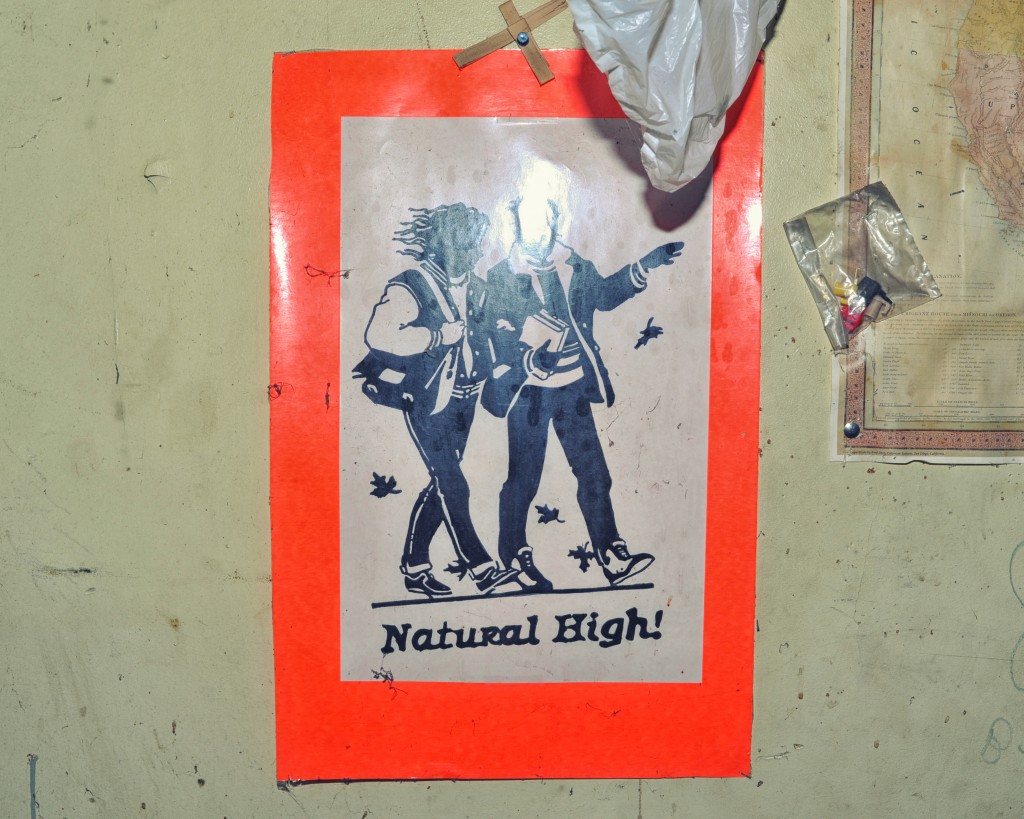 The Gym now littered mostly with cat feces, old books and a lawn mower. The smell has not left my nose for days now. 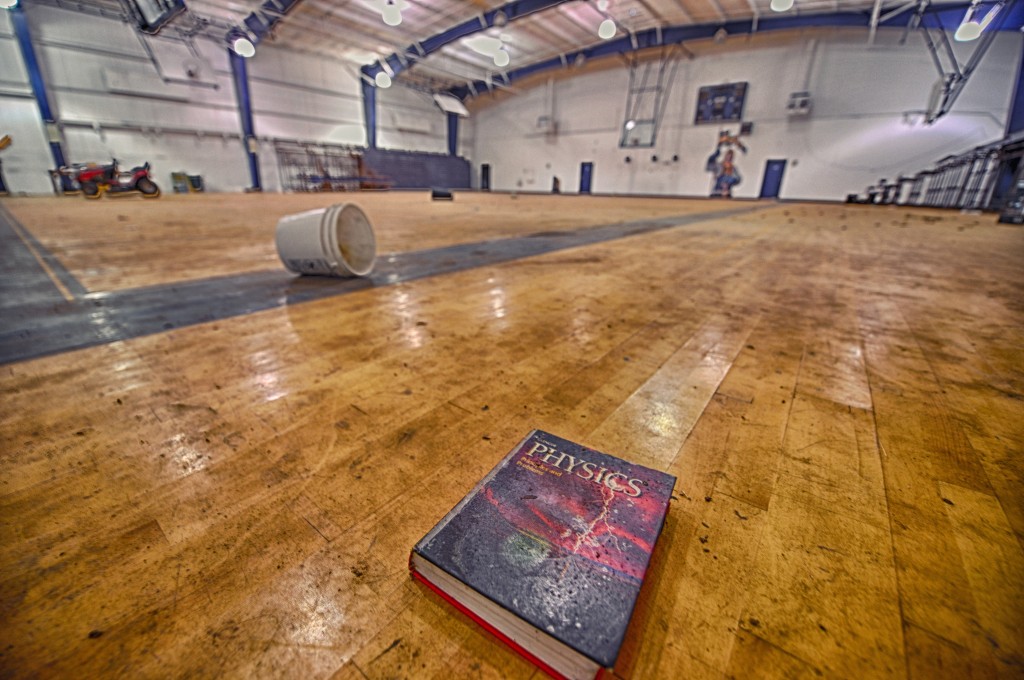 The gym was the meeting places for just about everything – dances, games, school meetings. It as always filled with sound. Not anymore. 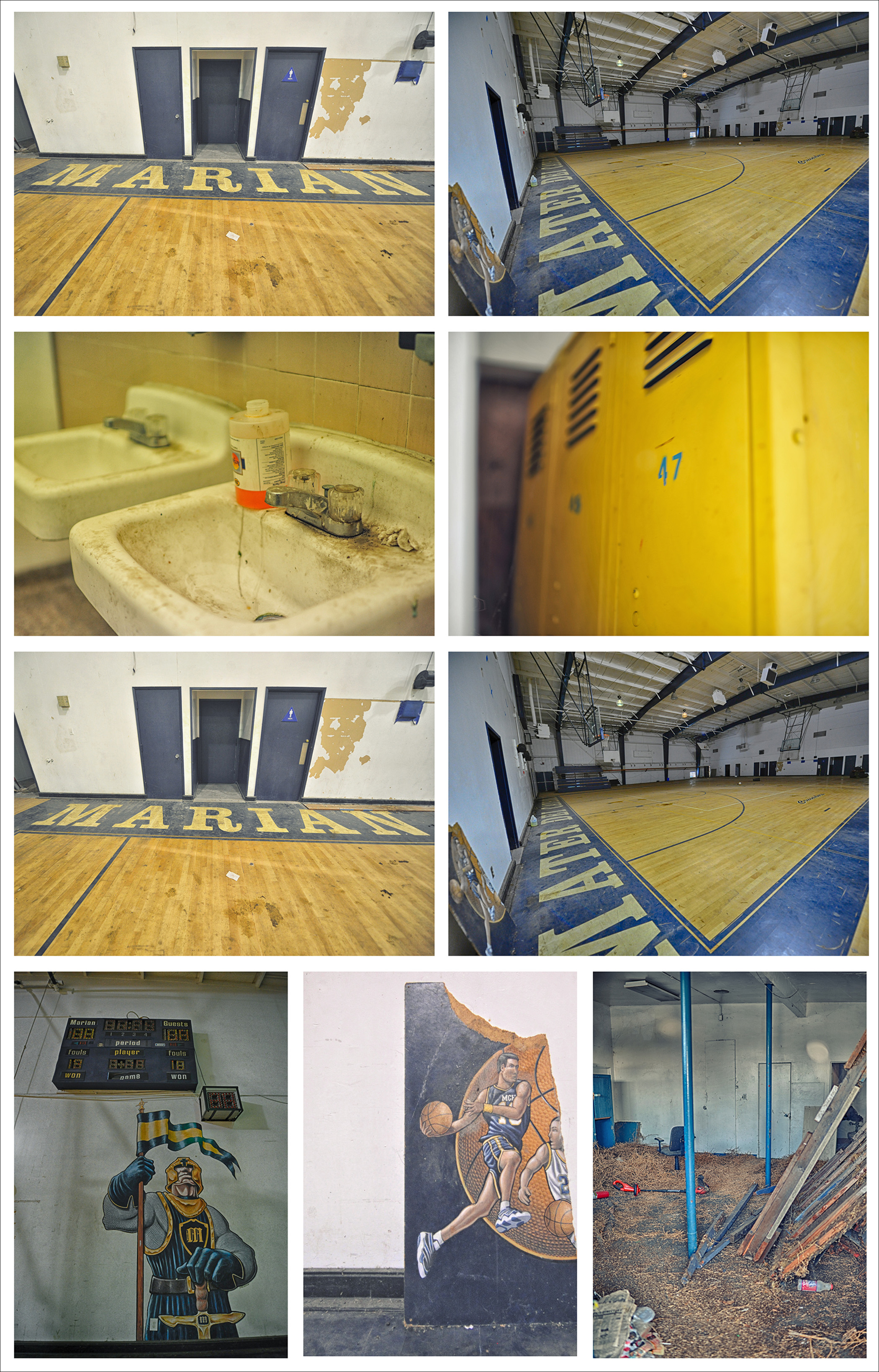 The football and the weight room.  You could hear the Led Zeppelin blaring from outside the walls while football players did their bench presses. 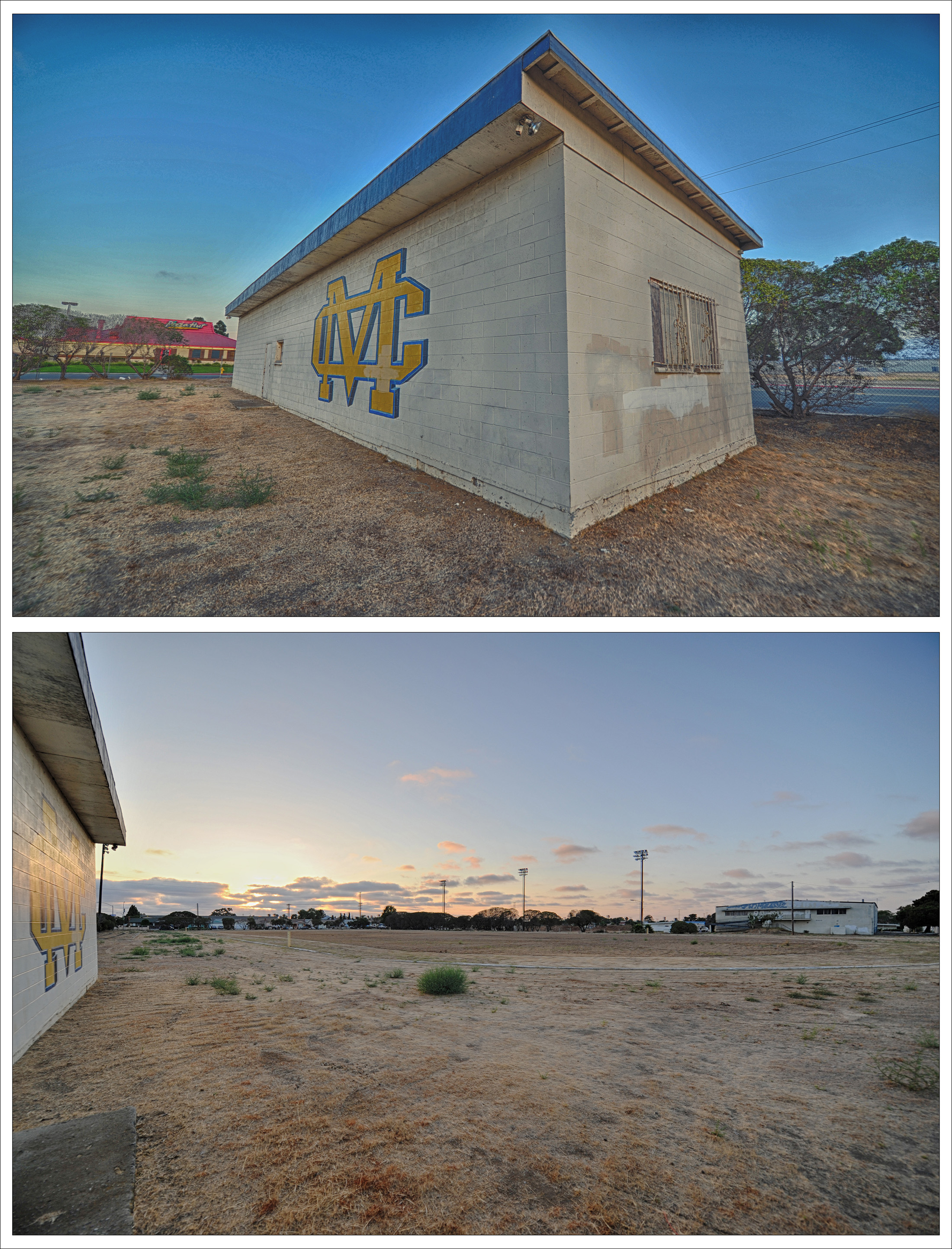 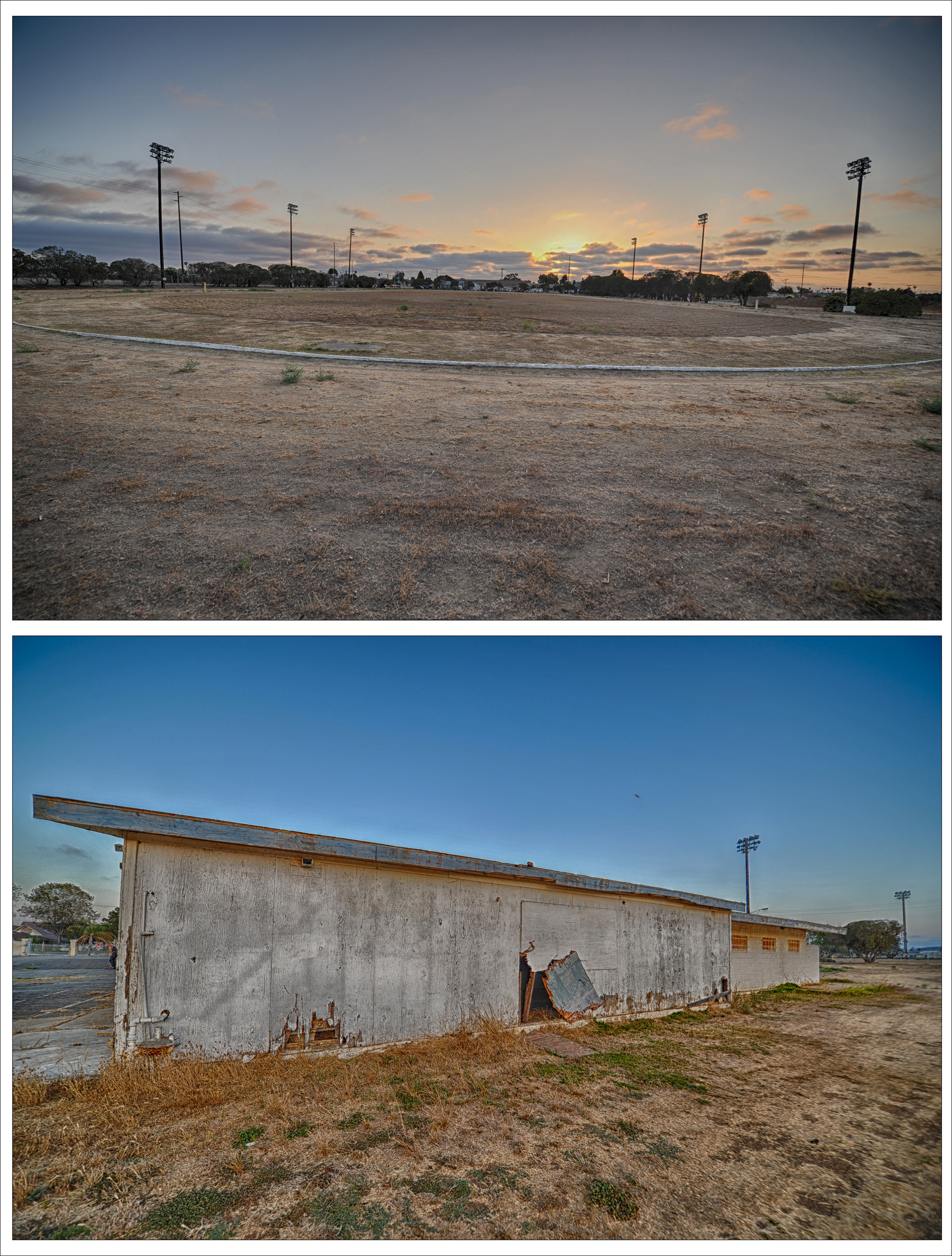 The library has a few books left.  Why they are still there is a mystery since everything was moved to the new school. I guess they didn’t make the cut. There is a mattress on the ground, some old computers and things that probably meant something to someone once. 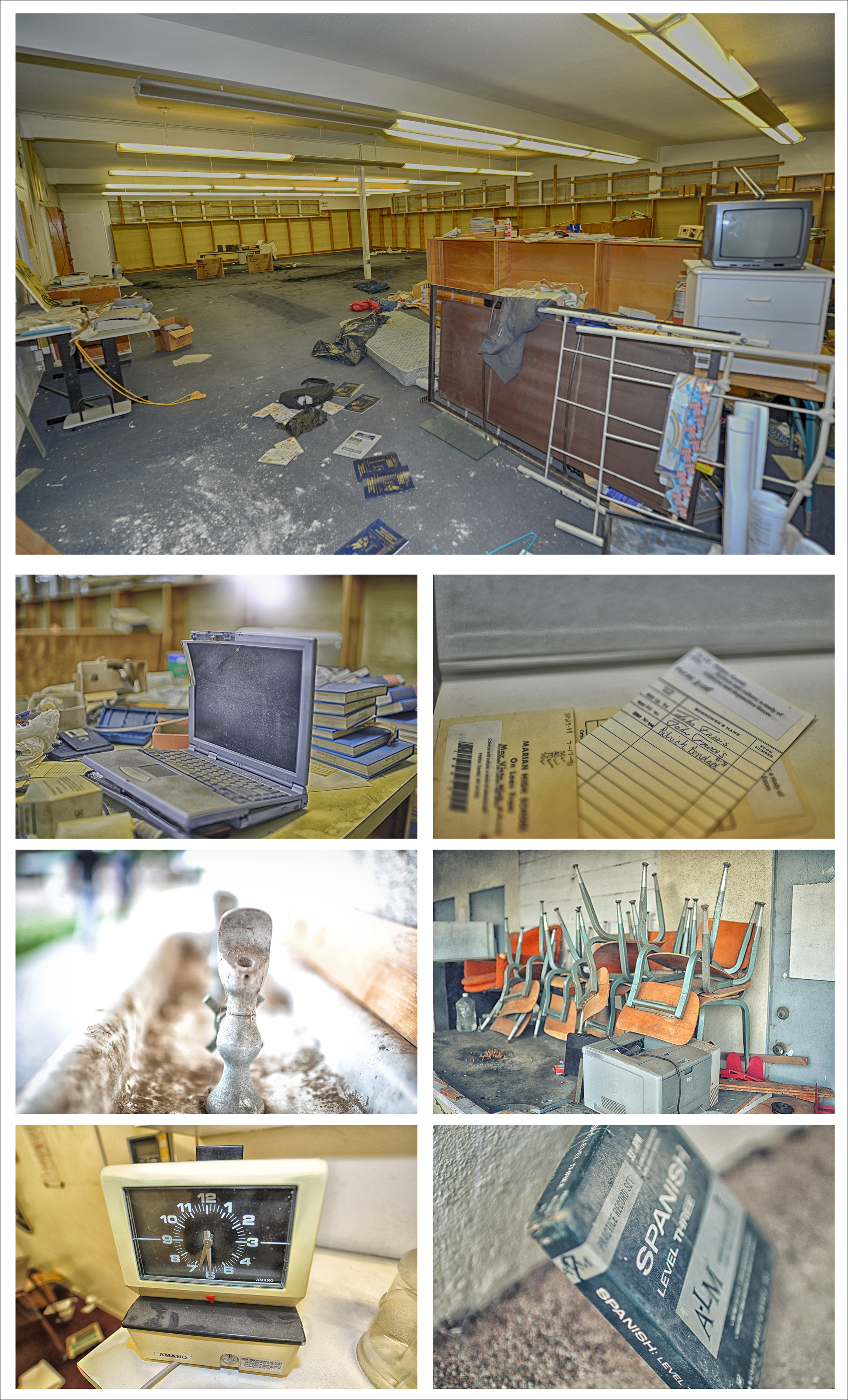 Letters and a diploma holder spill out of a box.  This was rescued. 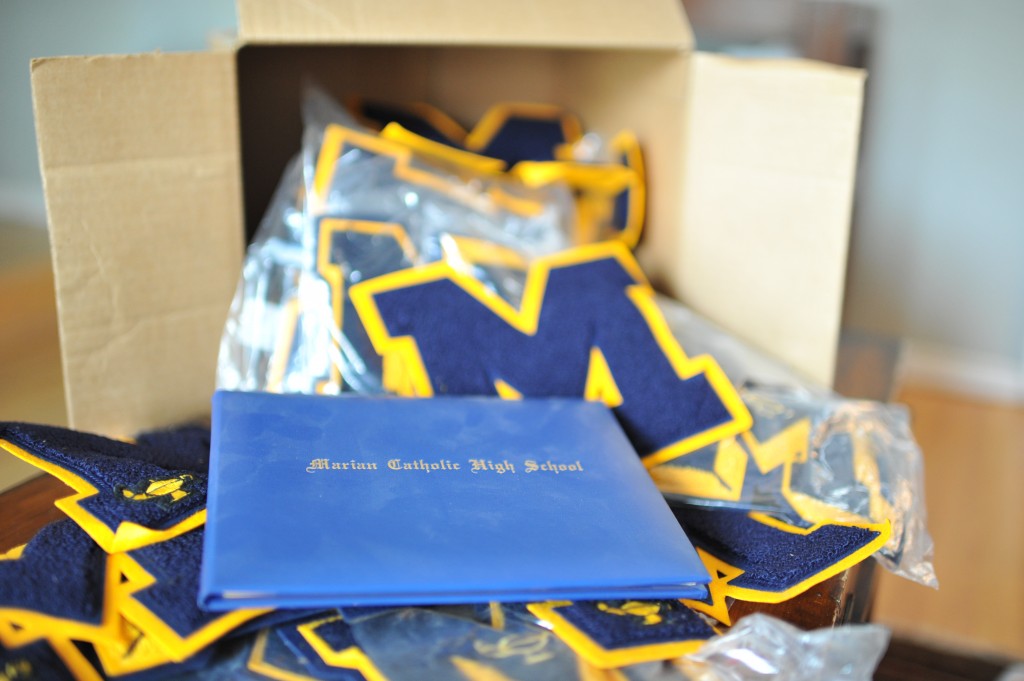 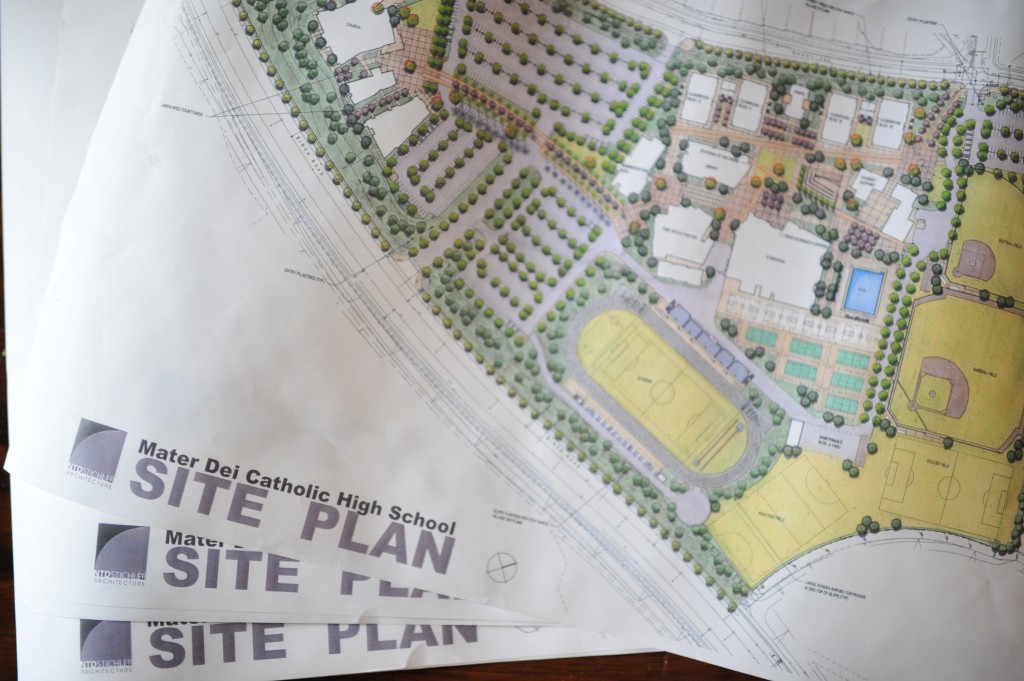 The Senior Lawn.  This was the power center of the school where freshman dared not tread.  My brother met his wife the first day of school at a locker which has since been torn down.  How many other people met their significant others in this very place? 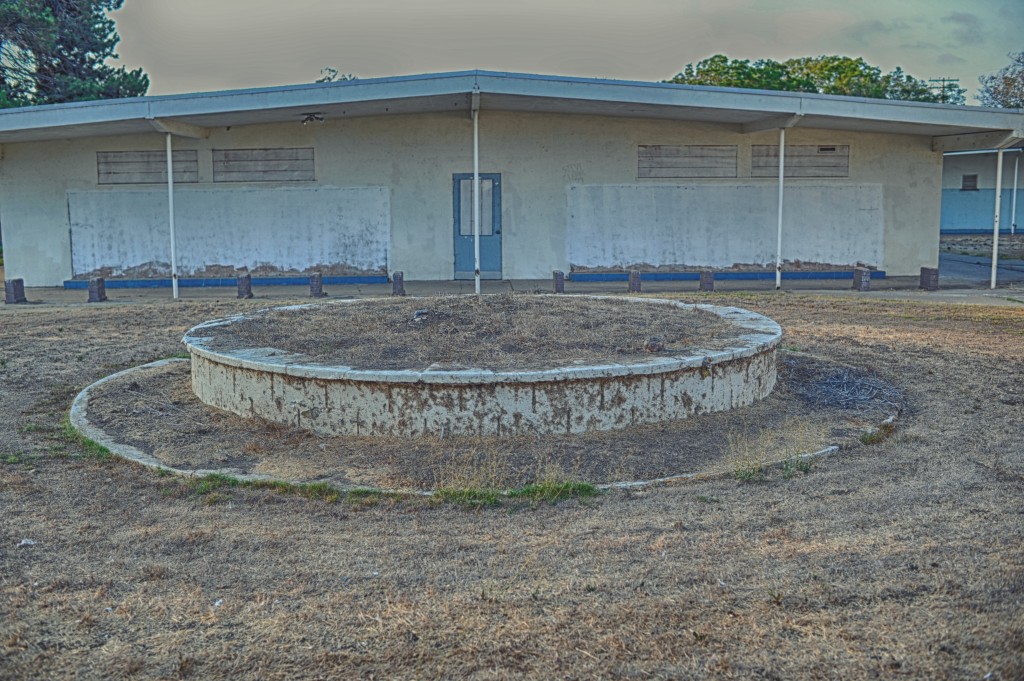 The old Cross still stands at the school entrance.  A cardboard plaque of the schools Alma Mater still left behind somewhere behind the shuttered doors. 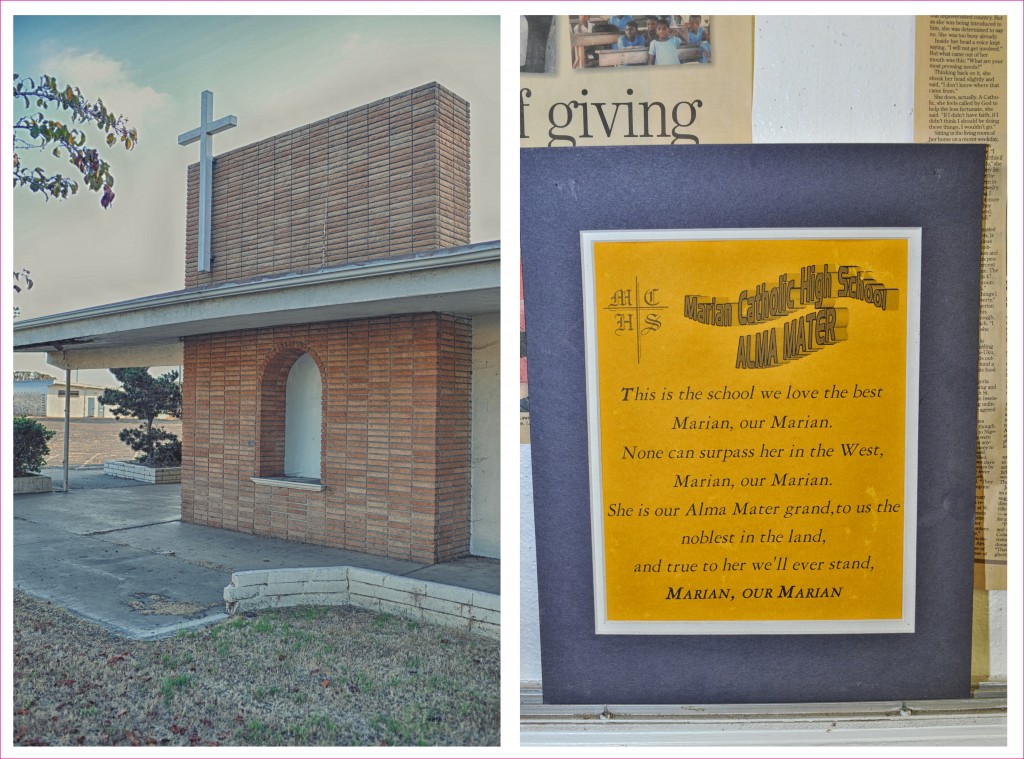