So Wednesday began with day something or other of our Japan adventure.  We have begun to lose count of the days spent here and I think that is because we have been so busy that we can barely remember what day it is. Well I imagine it is that and the fact that we crossed the dateline and time is confusing us.  Today was a day of hiking, some very bad tempura and the weirdest duck ceremony you can ever imagine.

The hike we took was amazing but hard.  A very steep climb up stairways to a hill far above Kyoto was how we started the day.  We went to the top of the Inari Shrine which is very unusual because it is completely under vermillion arches which are religious and very important to the Japanese.  These arches are beautiful and Eoin even re-enacted a scene from Memoirs of the Geisha when he ran through the arches located at the bottom of the climb.

The arches are beautiful and make for a very beautiful climb to the top of the mountain.  Everyone is taking pictures along the way so the hike can take quite a bit of time. 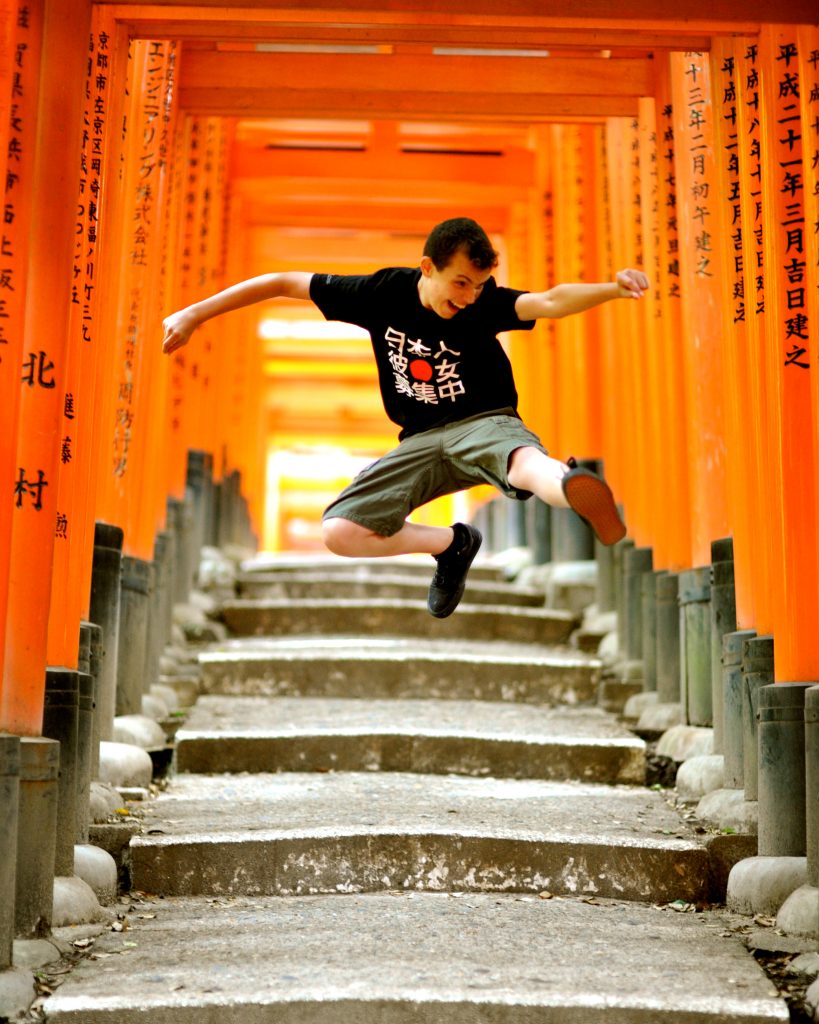 The Inari Shrine has both local Japanese people and people from the across the world.  Everyone comes here to make the pilgrimage to the top of the shrine. 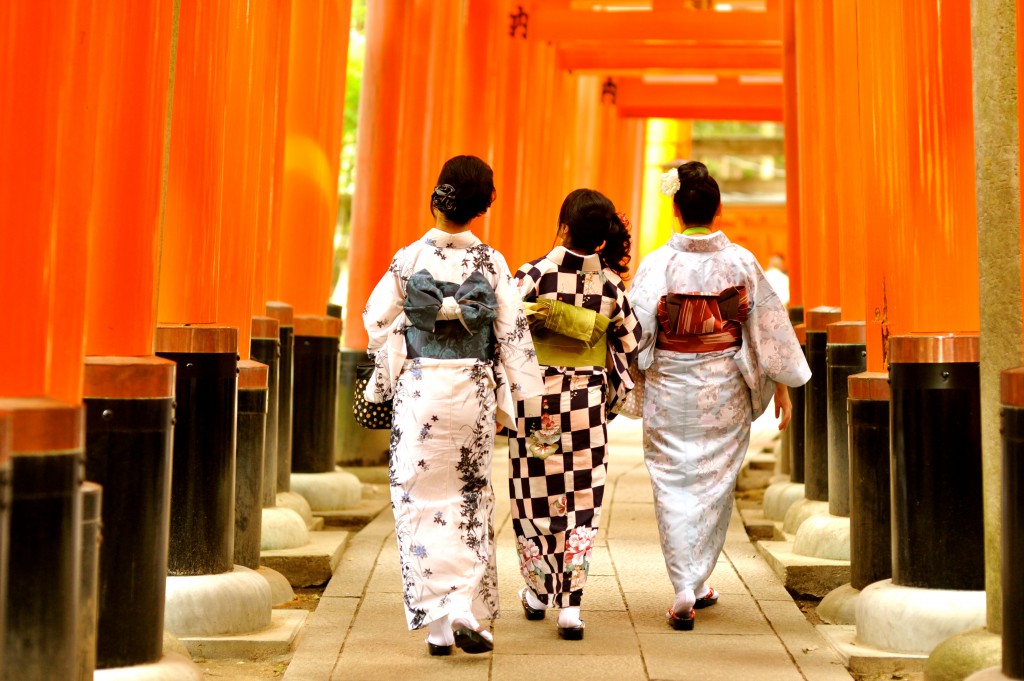 When we finally arrived at the top of the hill there was a very nice traditional style Japanese restaurant.  It was a very serene setting but also home to the worst tempura that Eoin and I ever had in our life. There was a tiny piece of shrimp caked in a coating which made it about 10 times it’s original size.  The only problem is that it was barely cooked and the tempura batter was dripping off it.  It looked good at first and then it quickly became the worst meal of the trip.  Later that night Eoin slipped back to his American ways and ate a Big Mac and an Apple Pie again.  The food here is unpredictable and ranges from amazing to very very bad depending on where you end up.

While at Inari Shrine I put up another good luck charm for Tu and I. This is what they call Torii arches in Japan.  There are thousands of these that line the pathway to the top of the shrine. 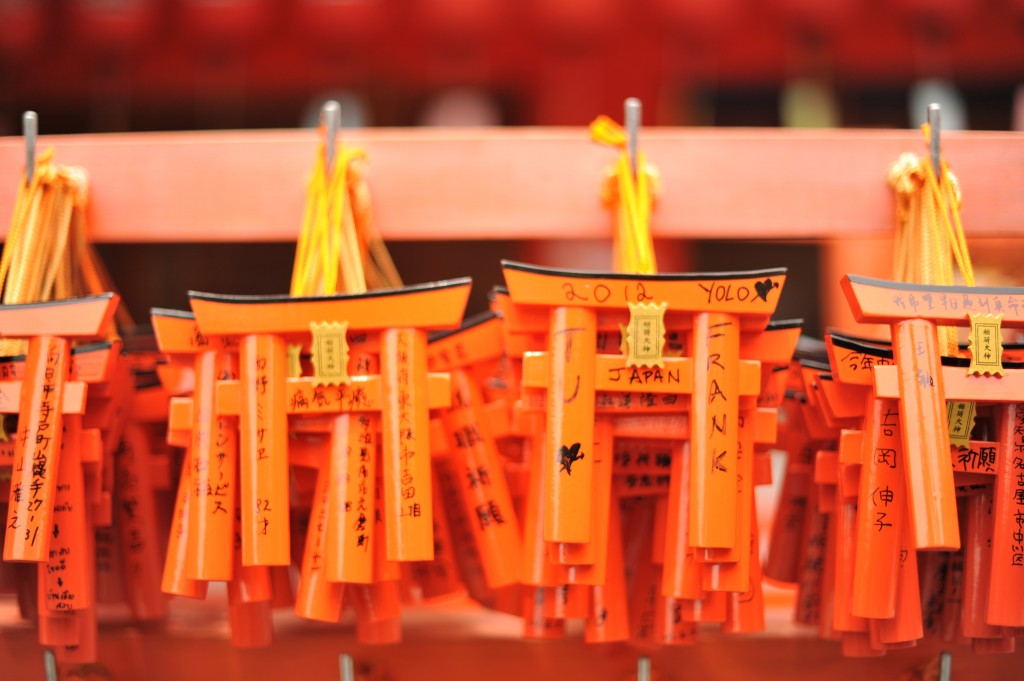 While coming back from the Inari shrine we witnessed a very sad event.  All of sudden fire trucks and firemen came out of everywhere.  It was a 5 alarm fire in the heart of the city and it was what they call a 5 Alarm fire because there were 5 fire trucks and lots of fireman.  It appeared that someone was badly injured in the fire because they came out in a stretcher. We really hoped the person was ok 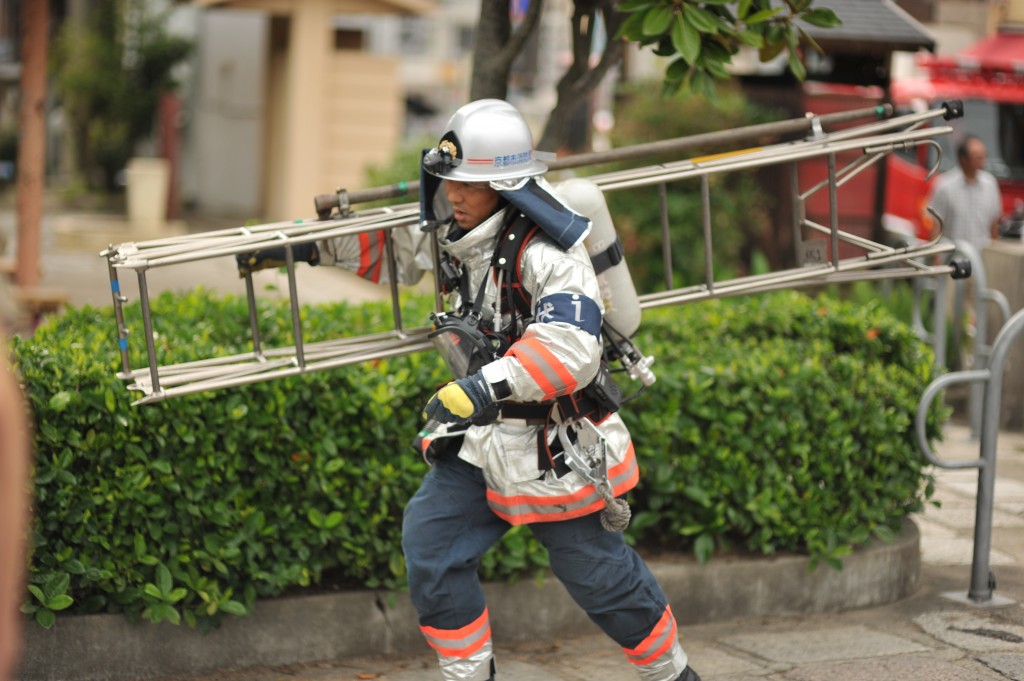 While we were there, of course Eoin made some local friends.  Everyone loves Eoin here. 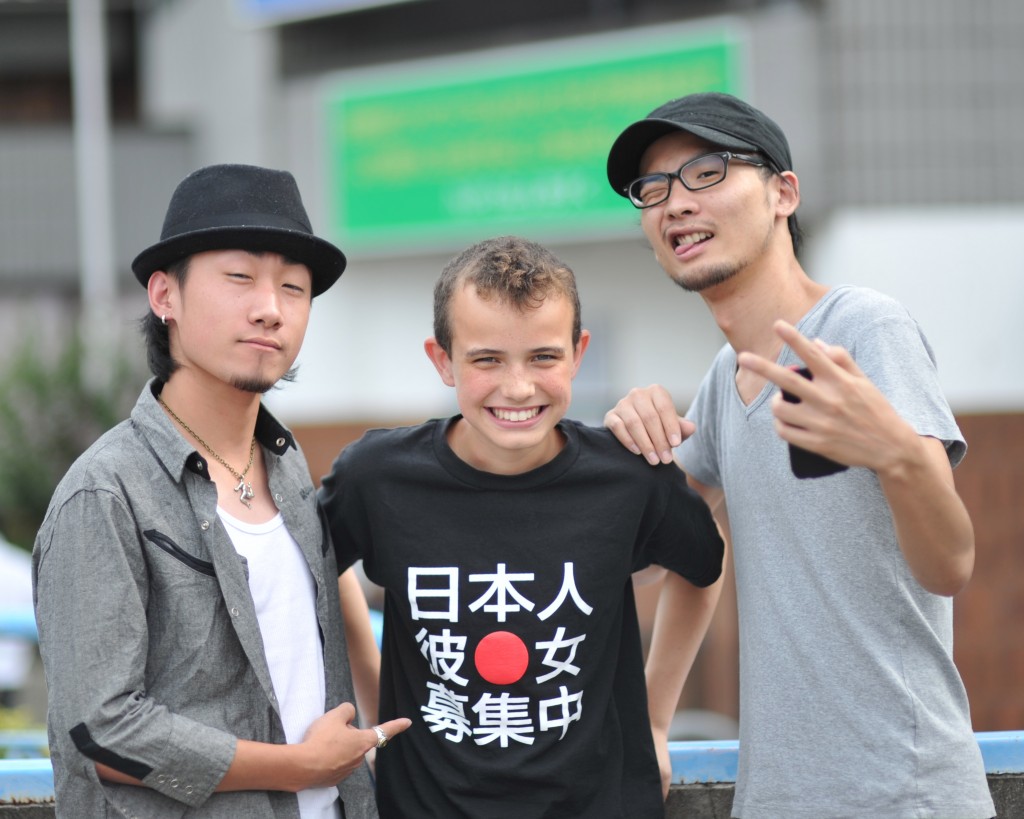 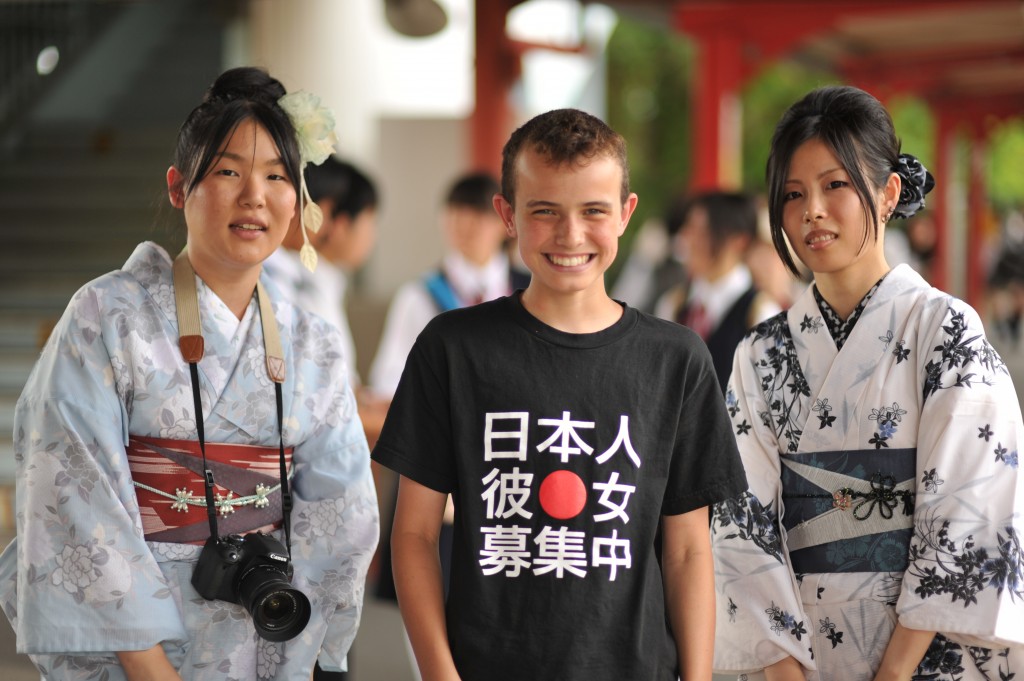 He is really like a rock star here.  Everyone comes up to him and wants to take his picture with them.  The girl on in the picture below closest to Eoin was jumping up and down when Eoin said he was 14.  She yelled, ” I am 14 too!!!”.  She was so happy. 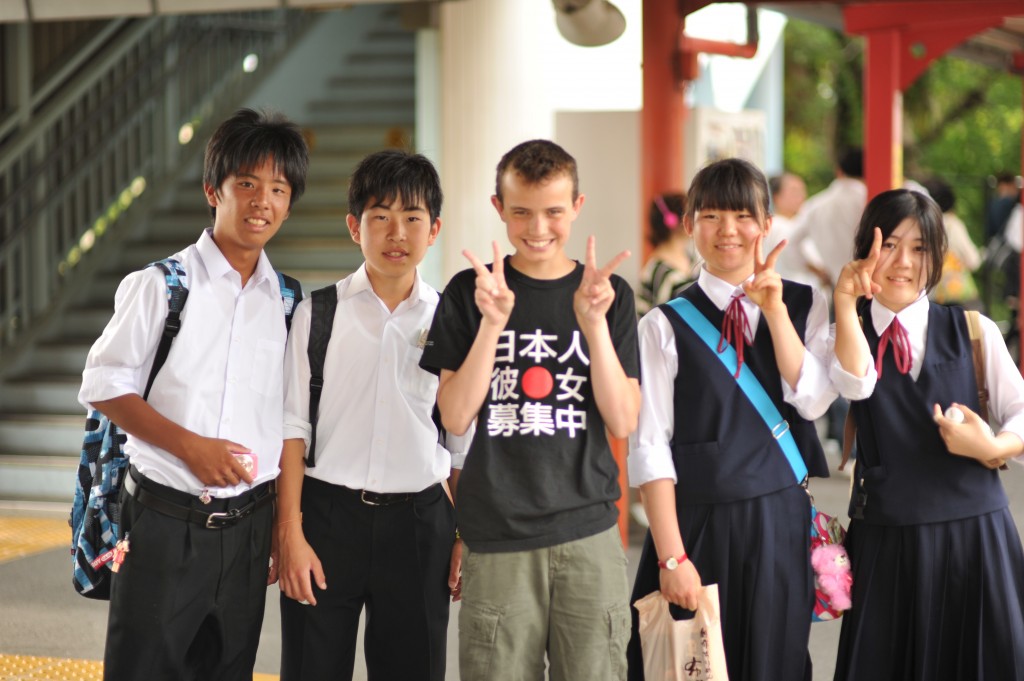 The final part of our days journey involved heading to the city of Uji to watch one of the strangest and weirdest duck ceremonies on the planet. If you are searching for entertainment involving boats, fire and ducks then this would be the type of ceremony that you would want to attend.   We were the only non Japanese people at this place and it was all in Japanese which made it even weirder.

By the way, can you spot Eoin in this picture?  Eoin likes to pretend he is Waldo and hide in pictures.  If you find him you can win 1 trillion dollars or yen. 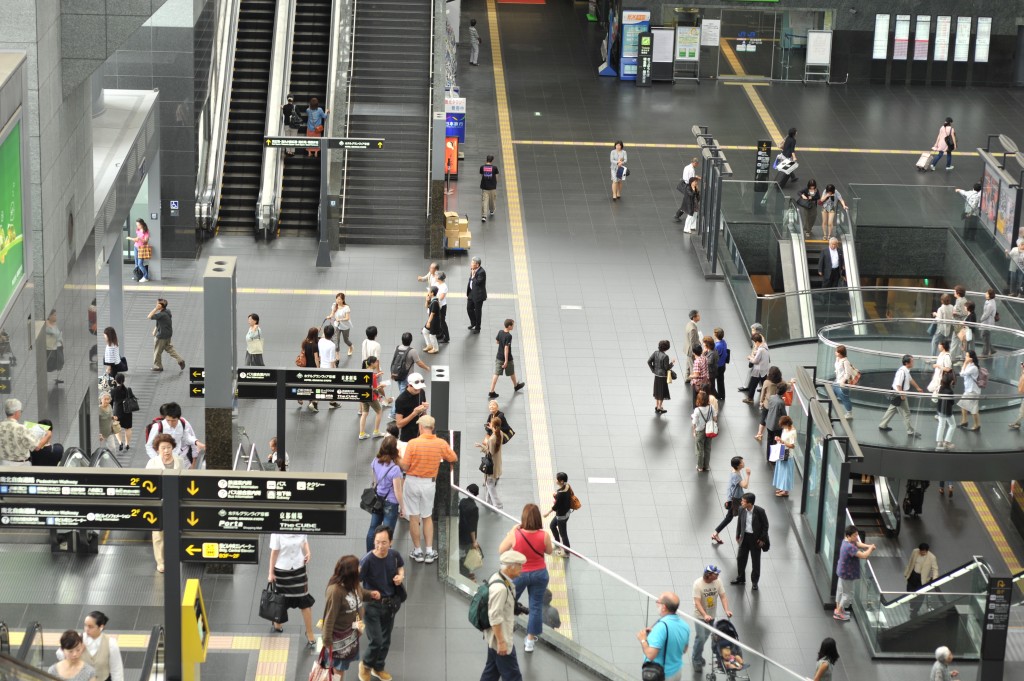 Well this morning we are back on the bullet train to Tokyo.  We don’t have a hotel or a train yet so we need to get hopping.  Over and out from the big Japan.