It’s the largest wholesale fish market in the world and they sell fish  – lots of fish.  The market also holds the record for the most expensive fish ever sold.  A giant blue fin tuna sold in January of this year for a record $736,700.  Every slice of sushi off that fish wholesaled for a record $96 dollars a slice. Don’t waste a slice.

Well if you like to get up early, and I mean really early you can catch all of the excitement of the Tsujiki Fish Market.  The market allows the first 140 or so tourist that get in line each morning a chance to catch a glimpse of one of the most exciting fish auctions (or any auction for that matter).  We got up at around 3:15am, caught a taxi to the Ginza district and found our way to the warehouse which was located in the front of the market.  Arriving at about 4am we had about an hour and a half to wait in line and catch all of the action as truck after truck arrived with fish from all over the world to be sold as this incredible market.

It was raining hard so they let us inside a waiting room earlier and gave us red vest to wear and sit with all of the other tourist from around the world.  This place was getting packed in a hurry as everyone wanted to see what happened here. 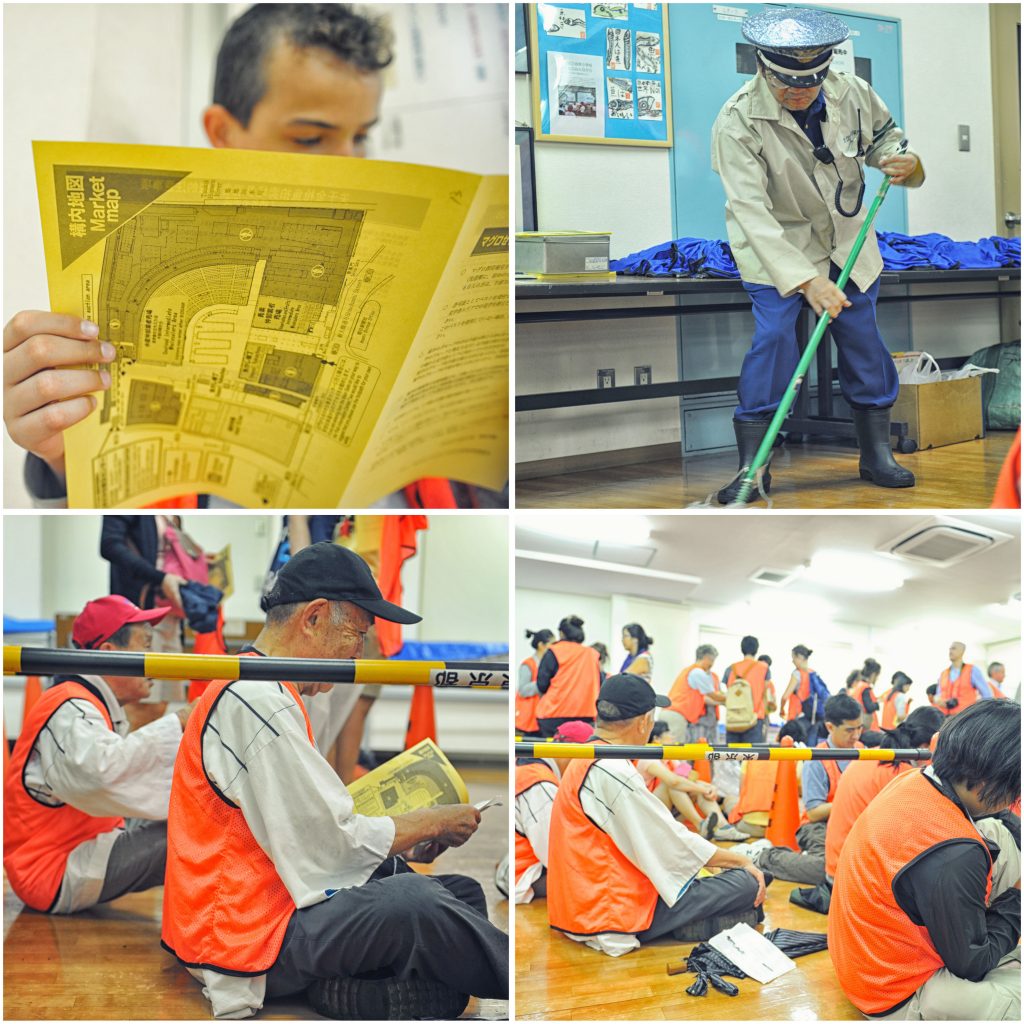 Since there are so many people that want to get inside, they divide it into two groups.  The first group gets in about 5:20 and stays for about 30 minutes and the second group gets in about 6 and gets 30 minutes inside the auction hall as well.  In retrospect it probably is better to be the second group because you get to see a little less of the inspection of the fish and a little more of the actual excitement of fish being auctioned off.

The auction hall is filled with frozen tuna.  They look like huge blocks of frozen fish ice.  It is quite remarkable to see hundreds and thousands of dollars of tuna in once place. 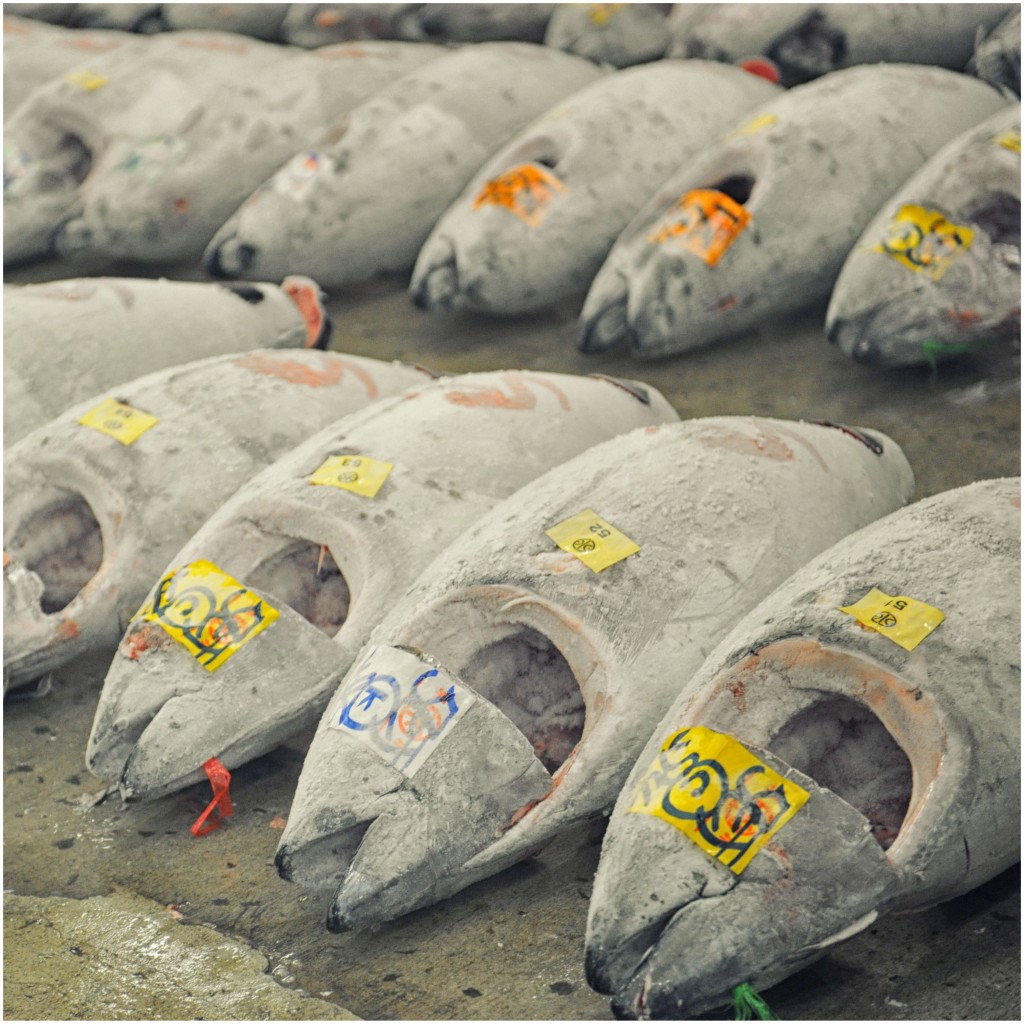 The gill-less and gutted tuna are prodded at, poked at and sampled by tuna expert guys that are expert at examining completely frozen tuna.  These guys have figured out a way to take pick axes to the tail ends of the tuna and take a morsel out of it and gauge the quality of the sushi that will come of it.  I don’t know how they do it but they were noshing on bits of frozen tuna at 5am and appeared to be enjoying it.  I prefer a nice piece of toast and coffee in the morning myself but to each his own. 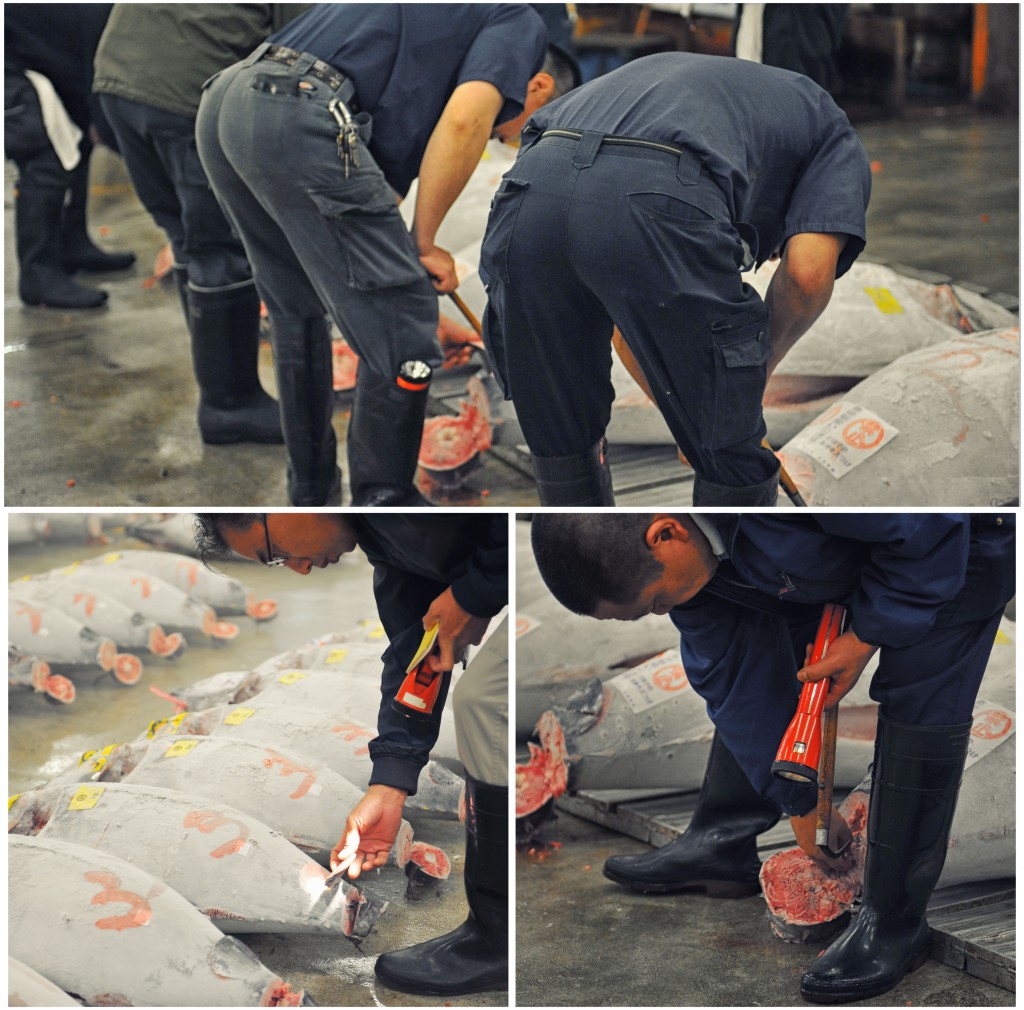 If you want to be a tuna auction guy in this market you will need  a few things.  One of those things is a pick axe, some rubber boots, a flashlight and a strong stomach.  The tuna auction guys keep it simple and get the job done. 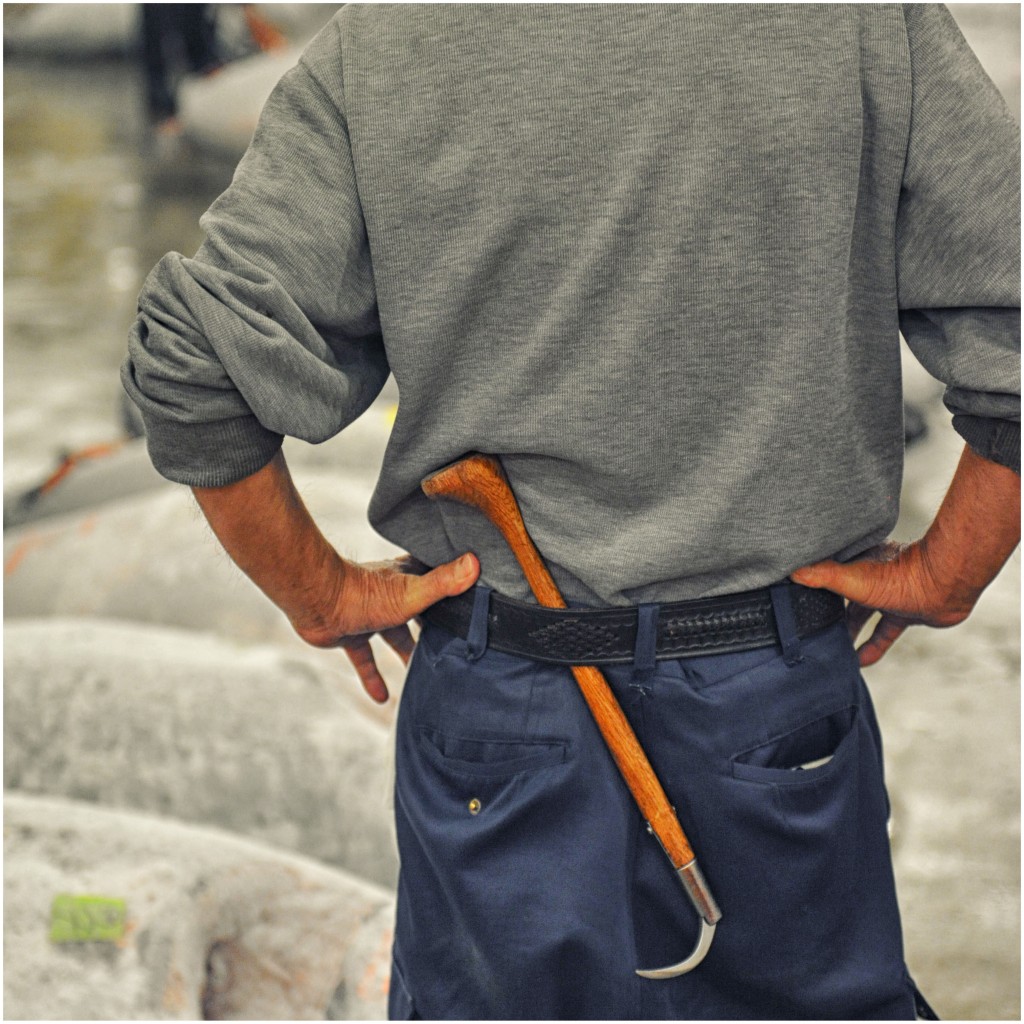 The hall seemed to get progressively more crowded and noisy as the minutes clicked by.  When we entered at about 5:20 it was just guys testing the fish but in the next 10 minutes auctioneers came out of the wood work to score a deal.  If I could have just gotten my hands on a million bucks or so I could have walked out of there with one of these tuna fishes. 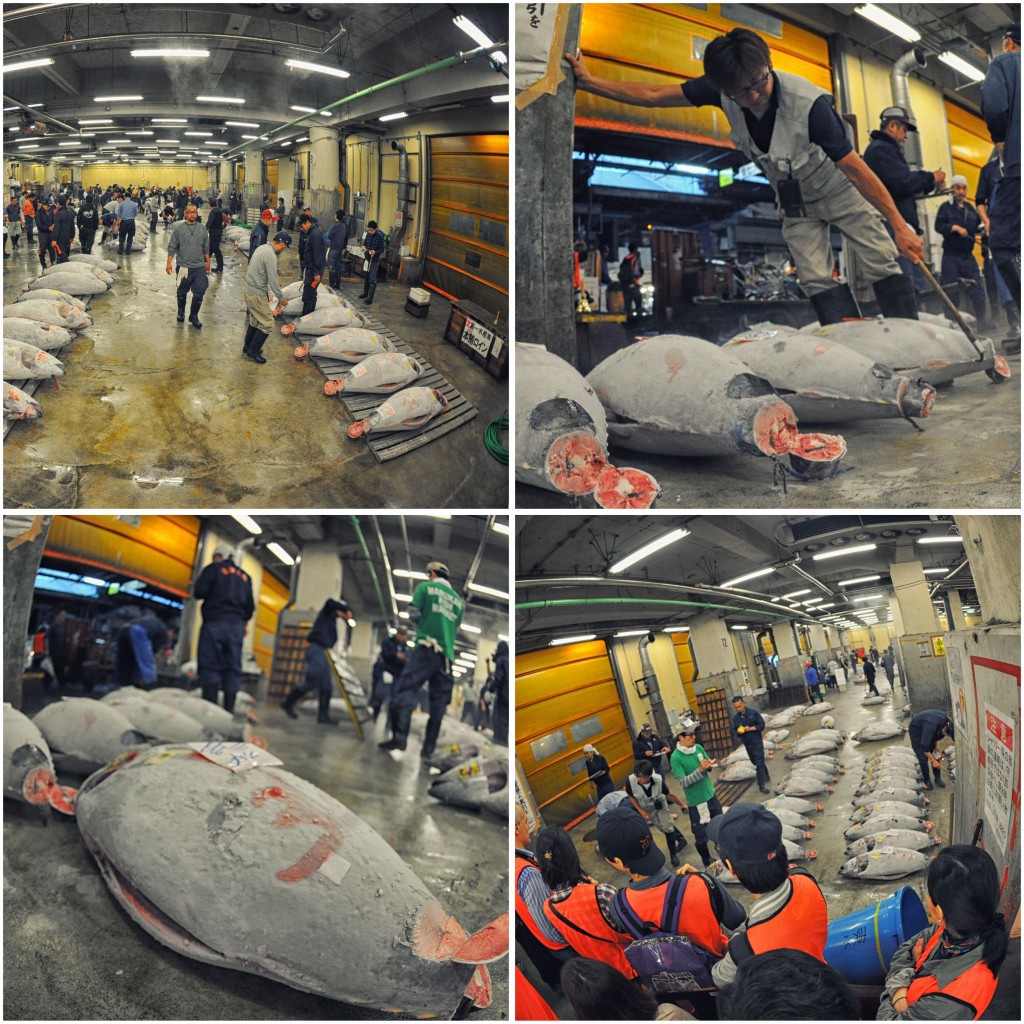 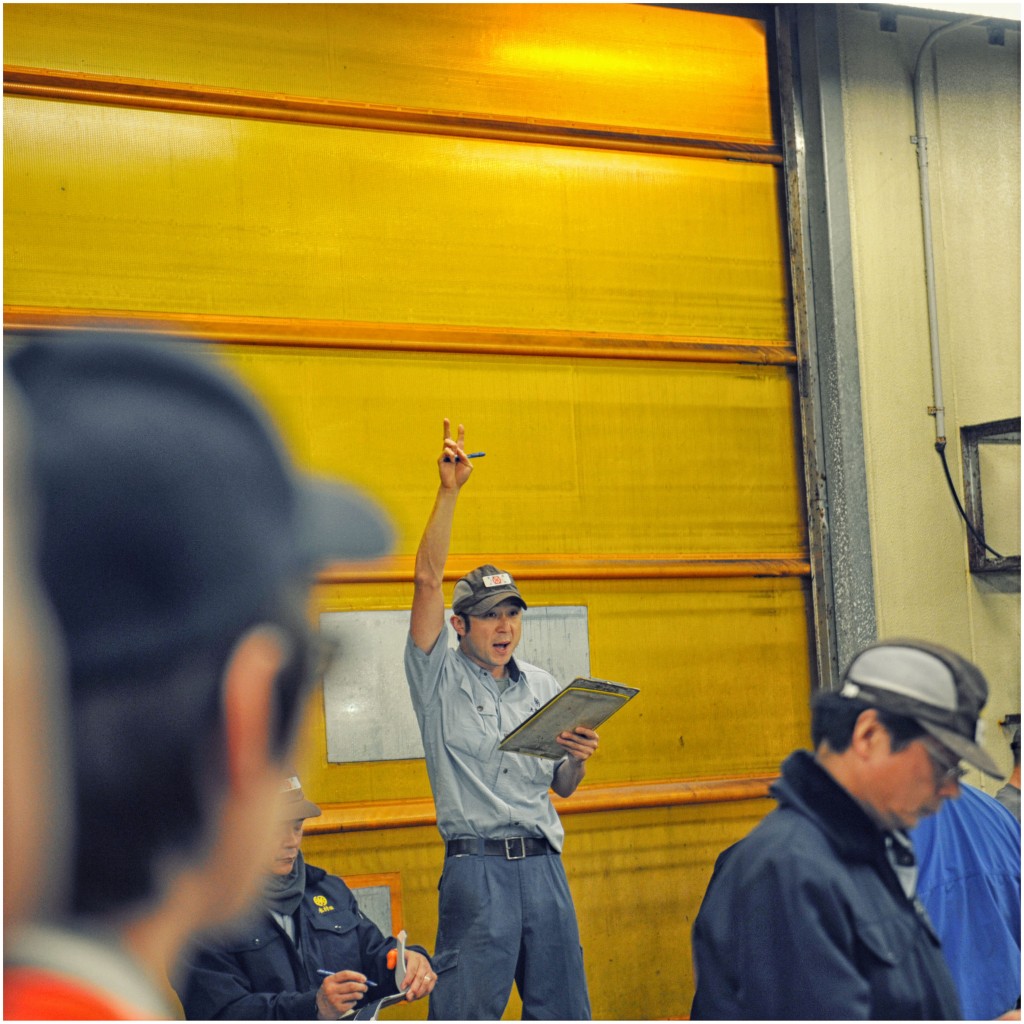 The Tsujiki Fish Market is open almost every morning except Sundays and Holidays.  Sometime tourist exhibit bad behavior by getting in the way or causing problems at the auction.  Several times the market has banned tourist for periods of months to punish them and to show that they are serious about not having the tourist become a distraction.  We were told to be extremely quiet and to not interfere with any of the business of the auction. 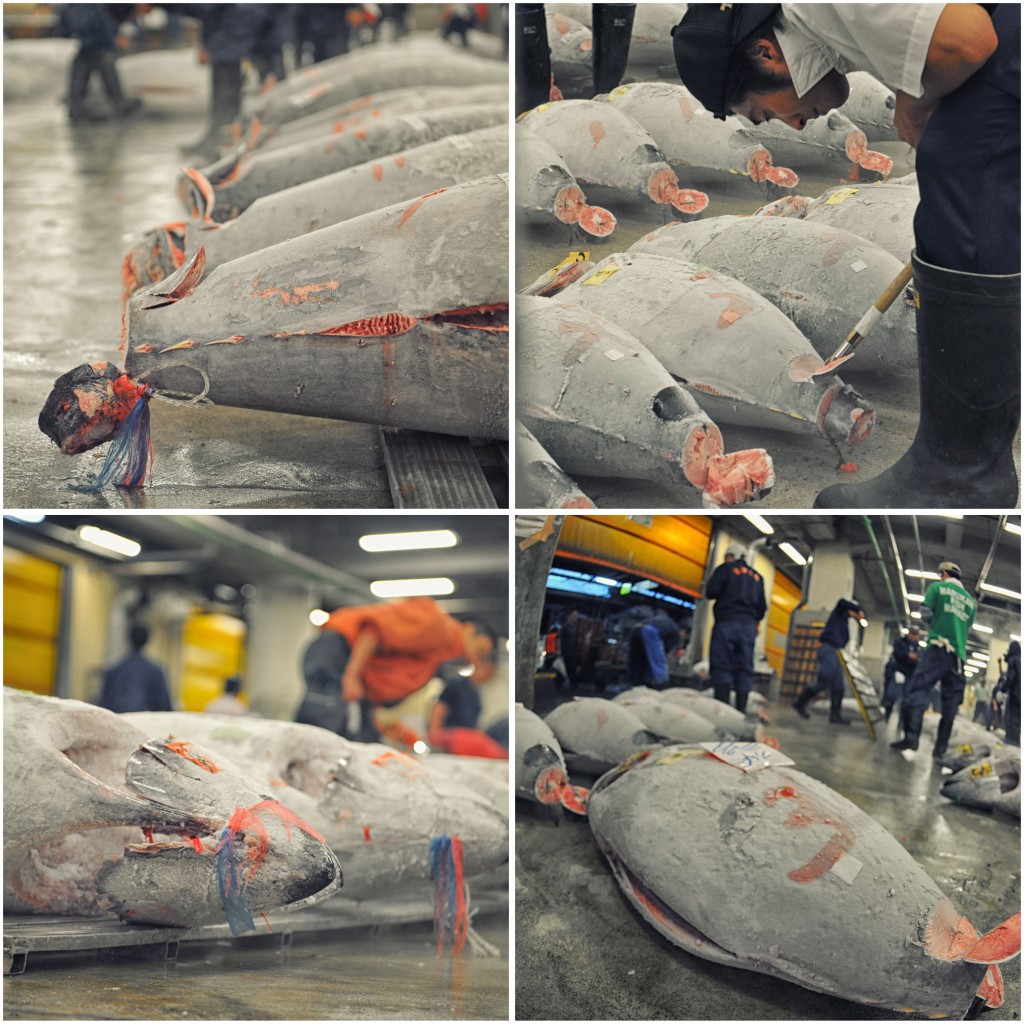 After these tuna are sold they are cut up in a separate room by a huge band saw. They typically cut it in quarters. After that it is shipped out to the finest Sushi restaurants in Japan and the rest of the world.  Now you can actually get good Sushi in this market at some very famous locations but it was raining so hard we didn’t get the chance to do that. 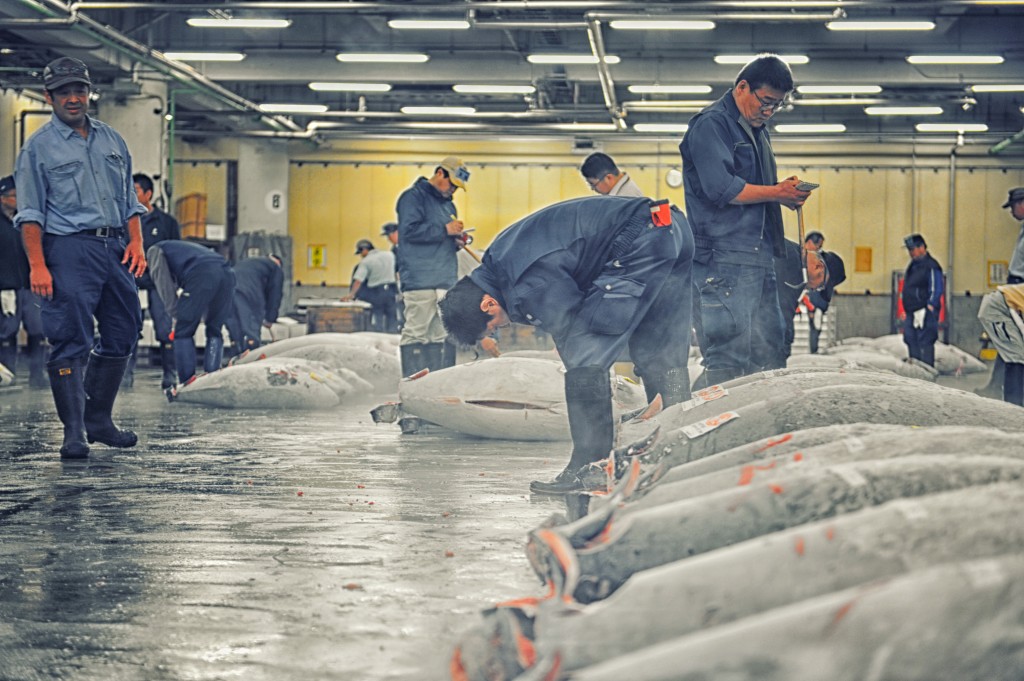 The most surprising thing about this attraction in Japan is that it was completely free.  Now, that is a pretty good deal. 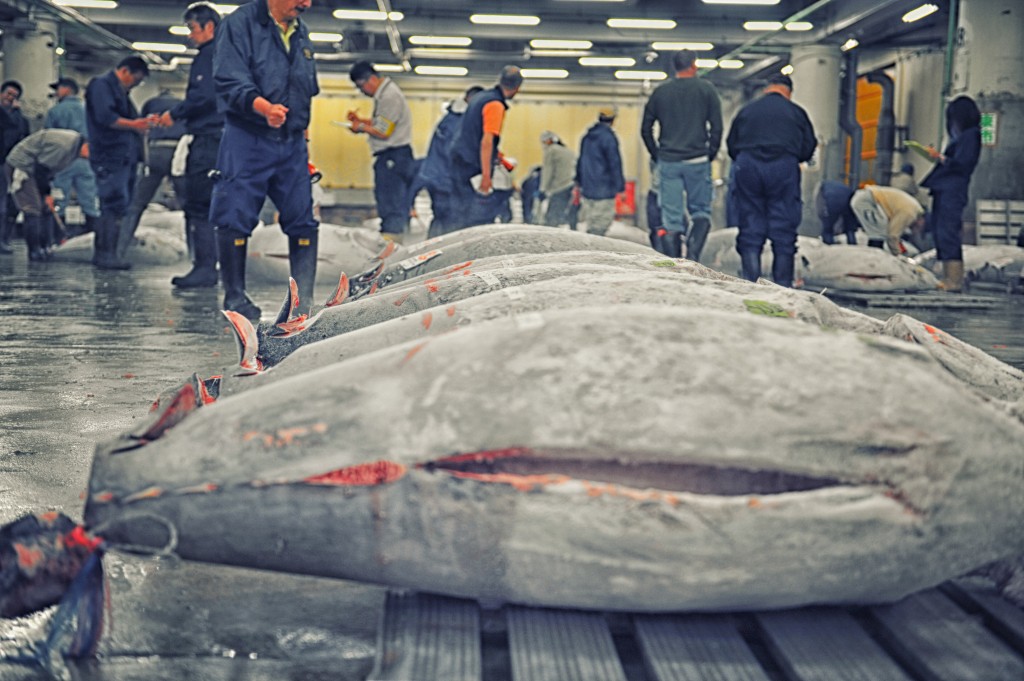 The fish market is abuzz with activity.  There are fellas driving these sled carts everywhere carting fish on ice, big tuna and every other assortment of stuff that is served at Sushi restaurants.  It’s no wonder this market sells about 600 billion yen and about 700,000 metric tons of seafood every year.  This is the place where the market for fish prices is created.  This is the center of all fish activity.  Fish hate it but the rest of us love it. 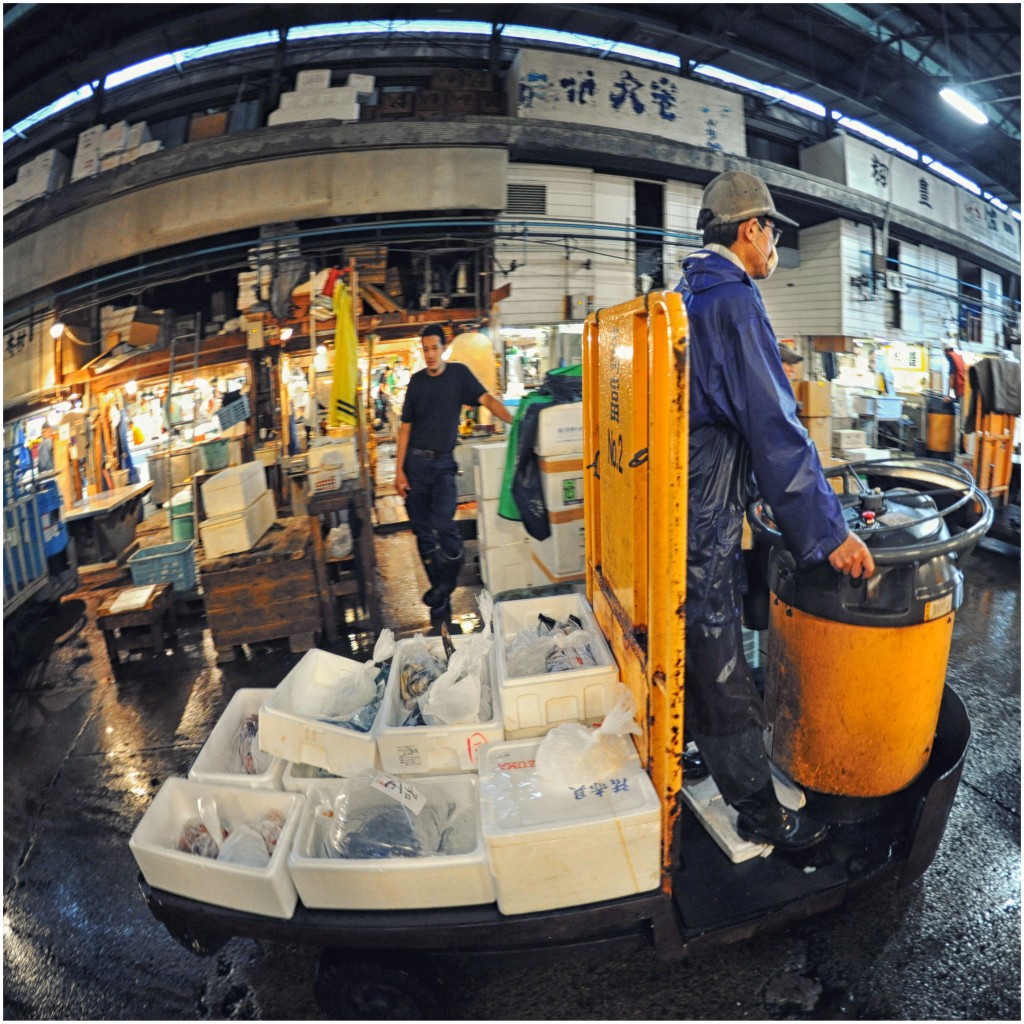 If you’re going to Japan this is the place to check out.  Do it on the first couple of days of your trip since you are still jet-lagged and getting up at 3:30 am is not a big deal since you’ll probably be awake anyway tossing and turning.  You can get the train there (it’s the Hibaya Line) but we elected to take the taxi since we didn’t want to get lost.  It cost about $35 to get the cab from Shinjuku but you catch the train for a few bucks.  It can be some great fun checking out the Tsujiki Fish Market.