Best Photographs of the Salton Sea 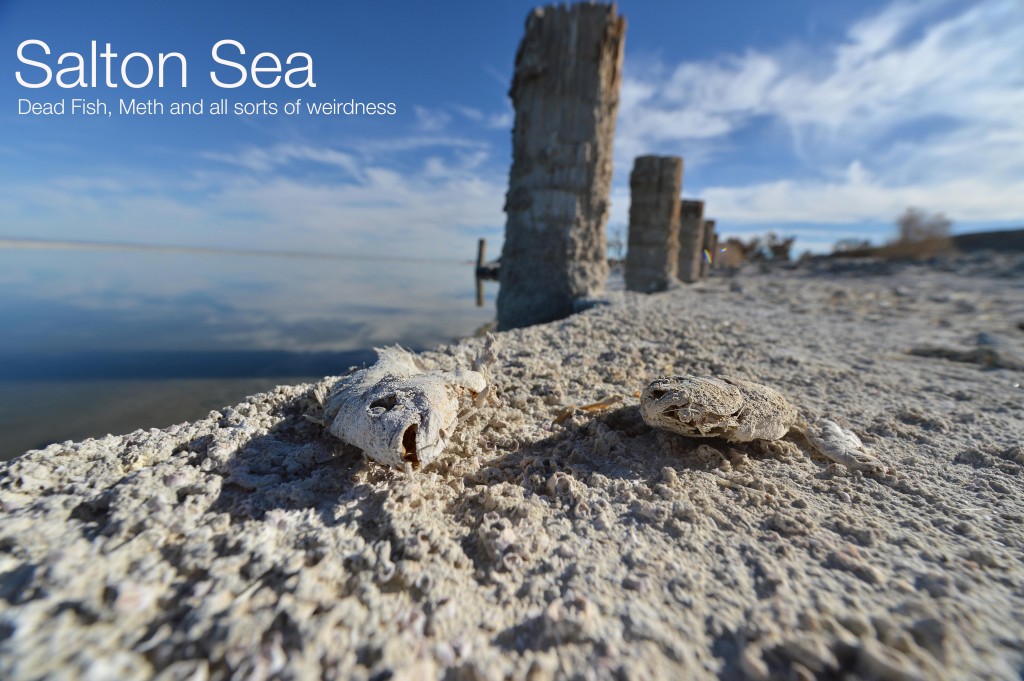 There it is.  Right in the middle of the desert.  You would never expect it, but it’s an ocean.  You might think you are at some coastal resort but the nearest beach is actually over 150 miles away.  Is it a mirage? No. It’s real and it’s called the Salton Sea.

In 1905, the Colorado River flooded into a basin in the center of California.  The basin was so large (about 525 square miles) and there was so much water that the place was named the Salton Sea.  It was created on purpose actually and engineers diverted water from the Colorado River into the basin so that it could be used as a source of fresh water for agriculture. That was a mistake.  Things got out of hand there however and more water and silt poured into the basin than they could handle.  They tried to plug it up but water kept pouring in every day.  They tried to build a dam but the water rushed over creating an 80 foot high waterfall.

The Salton Sea is not an ocean  though it might look like it.  It is a lake.  It is a very big and salty lake – the largest in California actually.  The lake is drying up, and as it does it’s salinity is increasing by about 1% every year.  It’s getting smaller and saltier every year. And as it does, it gets increasingly more strange and out of place. 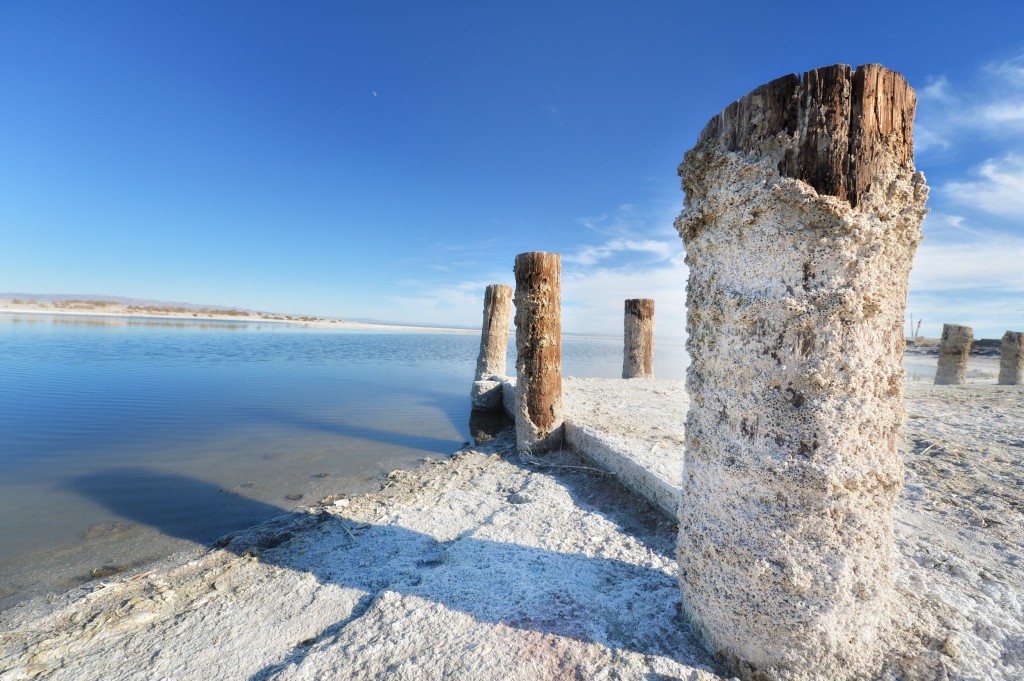 In the 1950’s the Salton started to gain some popularity as a Resort area.  The weather was nice, the water was crystal blue clear and it looked straight out of a magazine.  But the resort never caught on and the place went into decay.  The beaches are still there and some palm trees but mostly it’s just a collection of run down houses and trailer parks.  They call this the meth capital of the world. It’s not hard to imagine why when you see the old abandoned houses and trailers. 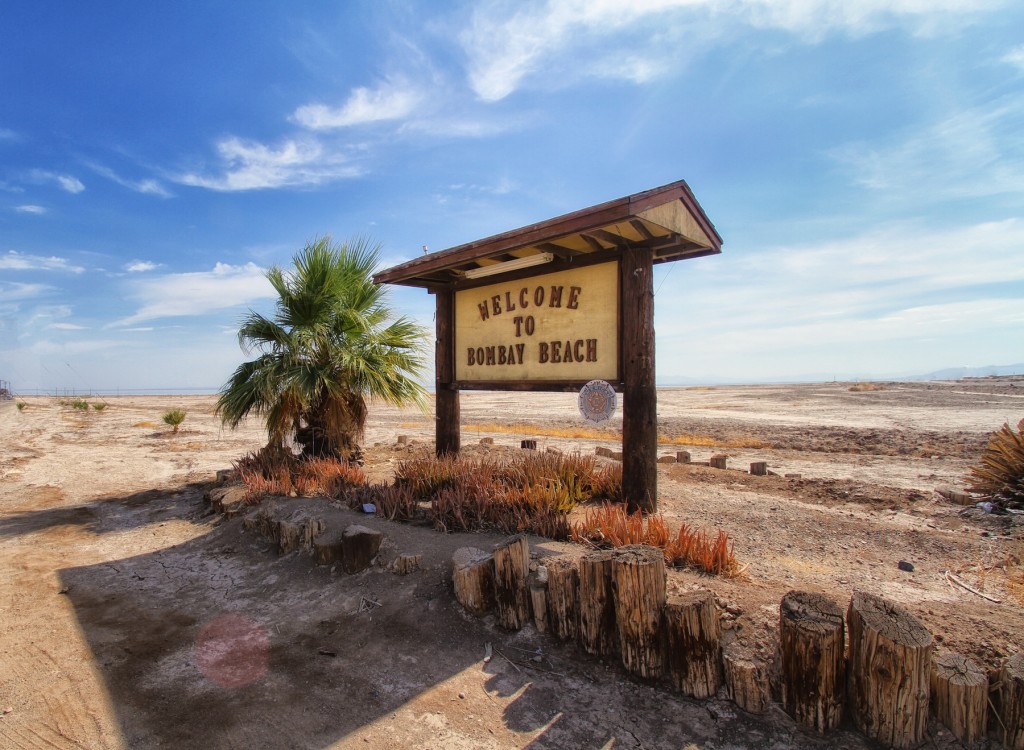 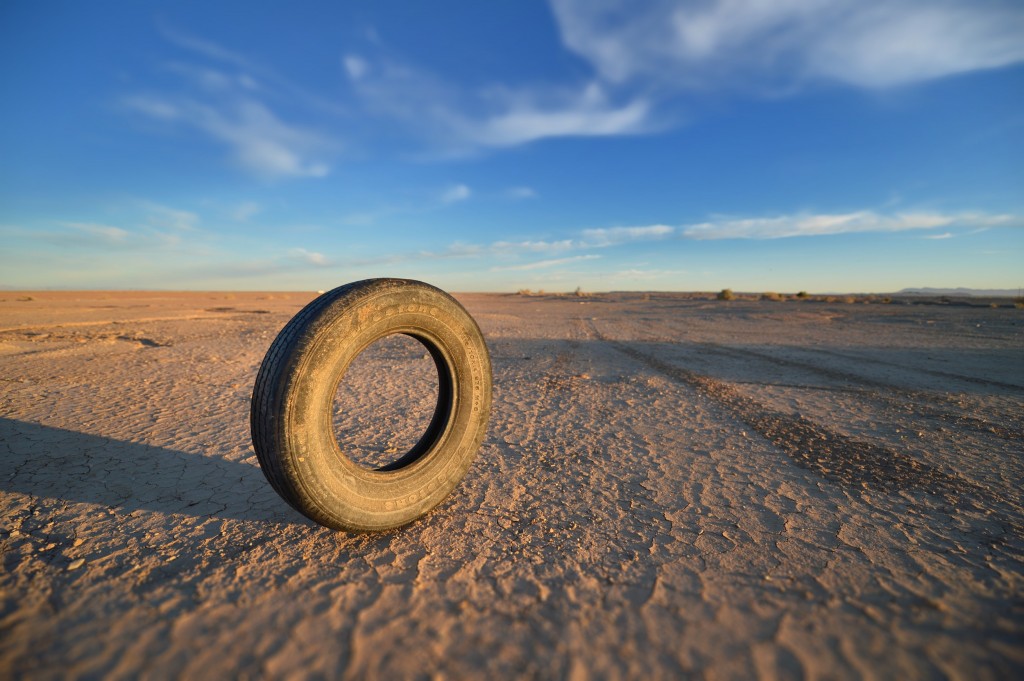 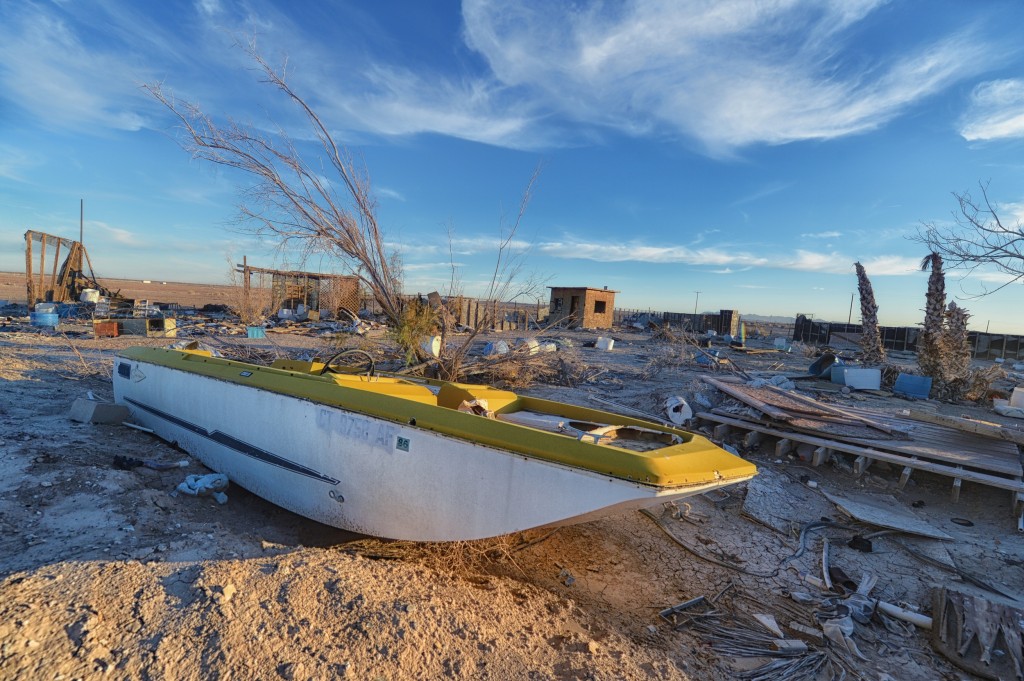 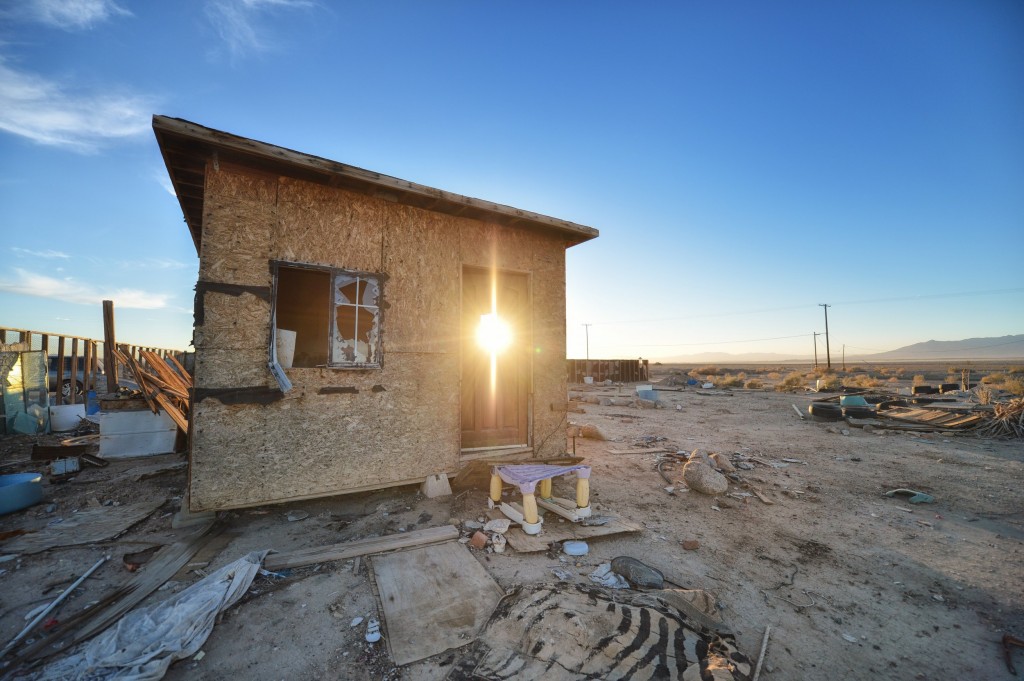 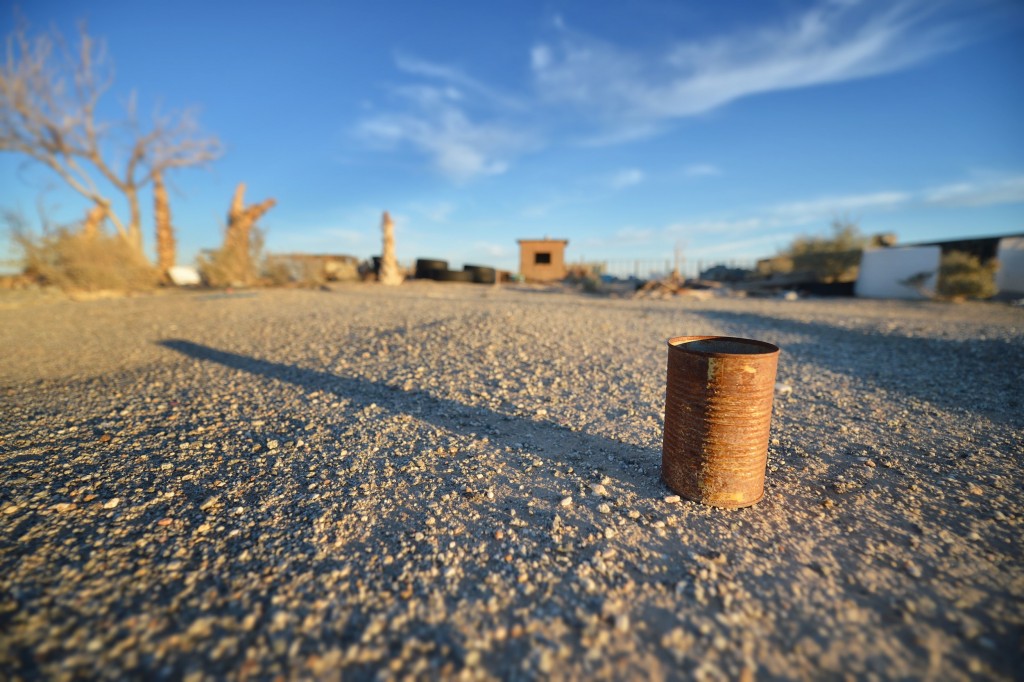 One of the other reasons that this place didn’t quite catch on as a resort (besides the fact that it is spooky as hell), is the fact that every year hundreds of thousands of dead fish wash on the shores.  The dead fish thing is not that appealing to tourist but it is very appealing to birds.  There are 400 species of birds that live on the Salton Sea and they are everywhere picking at dead fish.  It’s a dead fish Sir George’s Smorgesbord at this place. 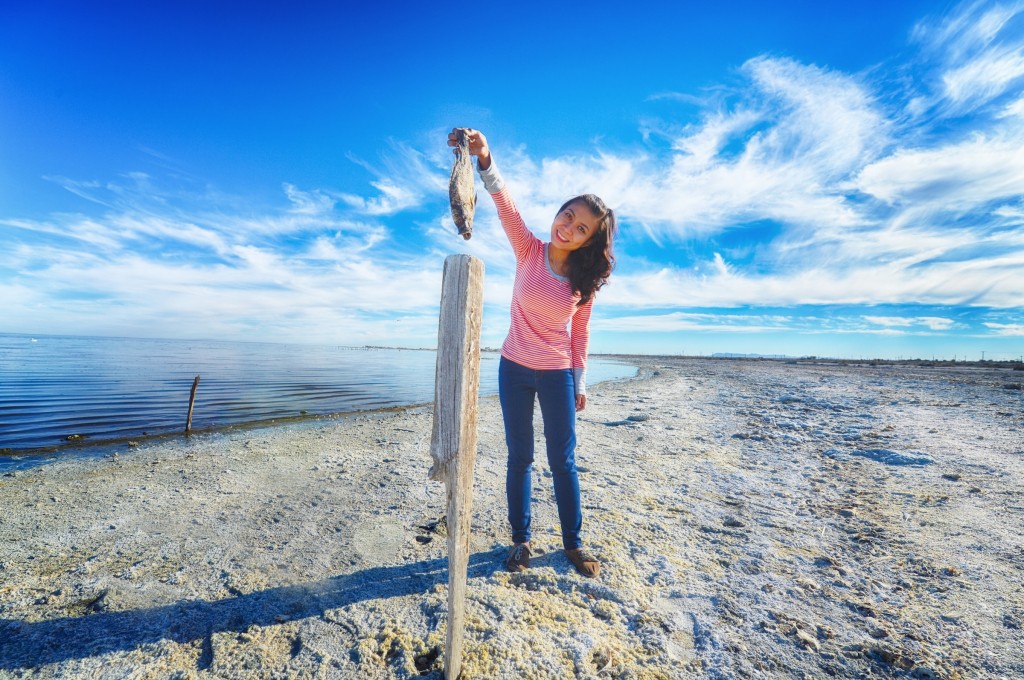 The only thing the Salton Sea seems to attract today are photographers, dirt bikers and people that like Motor Homes or like to live in Trailer parks.  You may have seen the movie in the 80’s called “Bombay Beach” which was a pretty good interpretation of the kookiness of this place.  Trailer parks seem to sprout randomly around the sea. 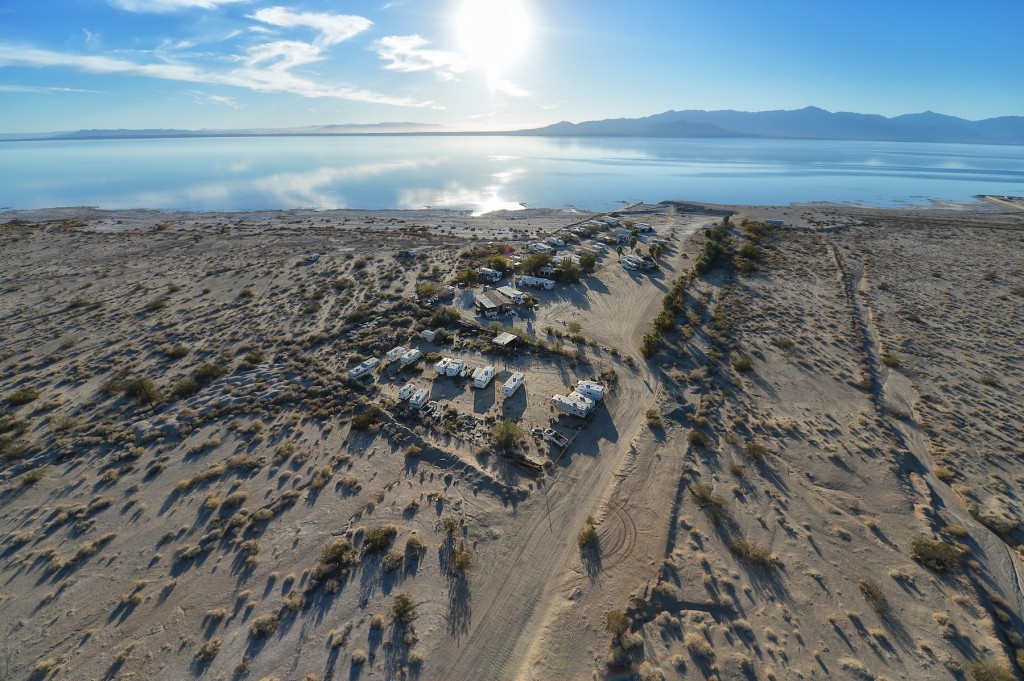 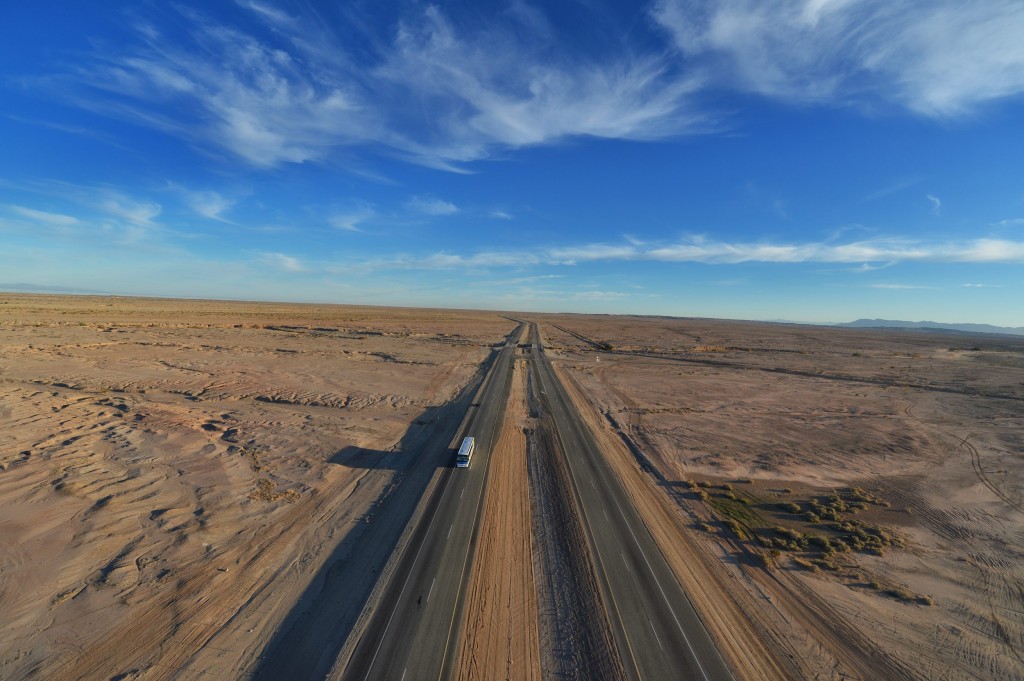 For all the weirdness of the Salton Sea however it is actually a place of beauty.  We took the helicopter over the sea and it was amazing.  The water and the sky seemed to become one.  It was actually quite dangerous to fly because you lose perception of how high in the sky you are.  It was an amazing view. 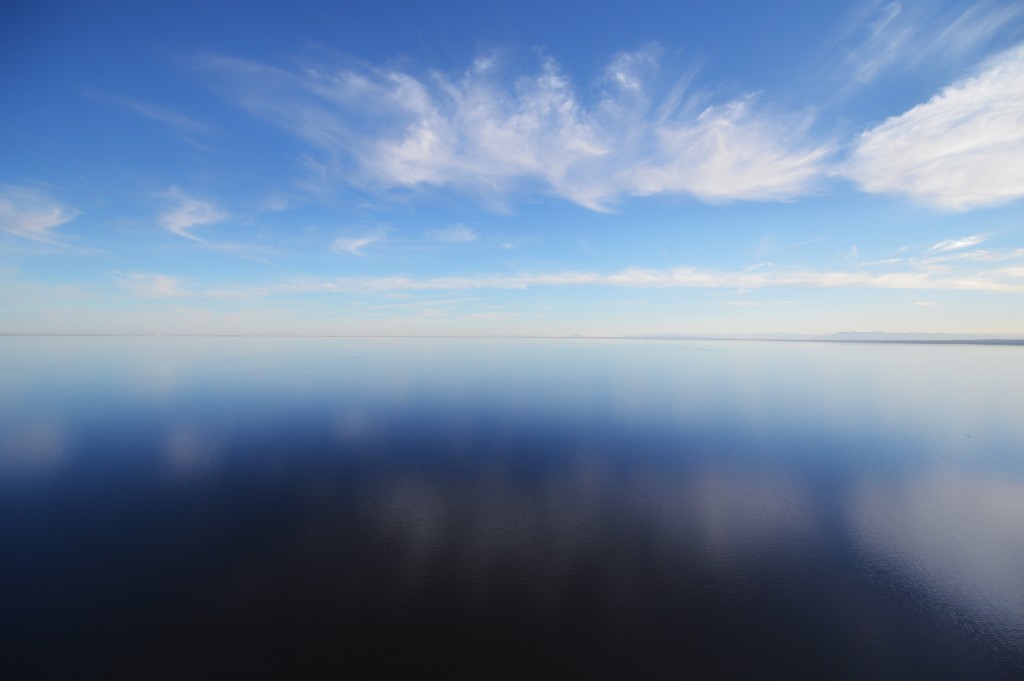 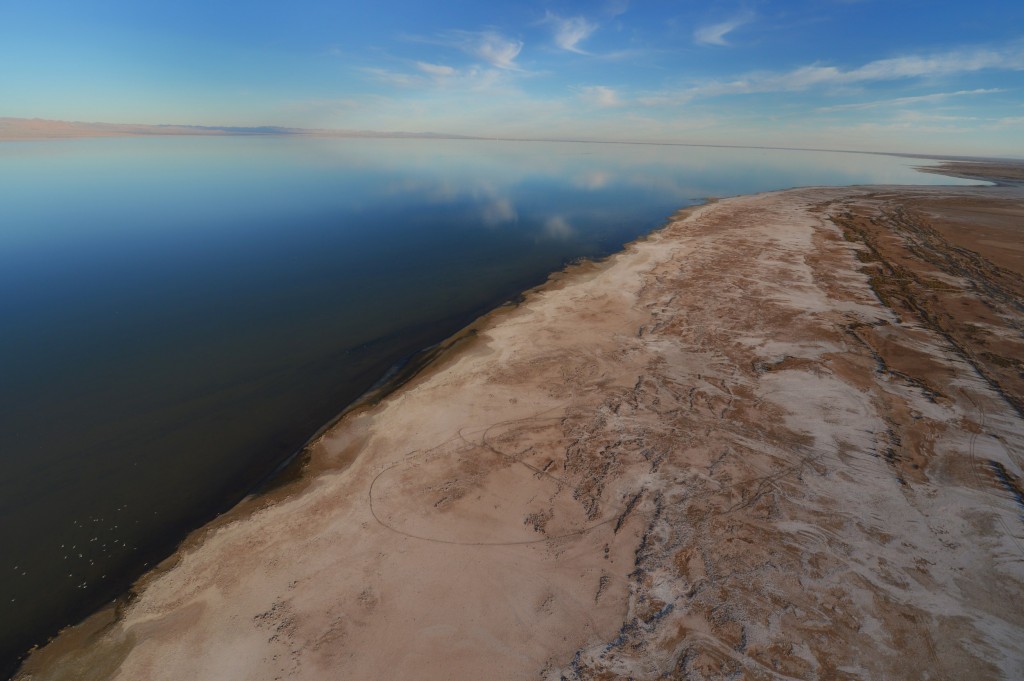 It’s actually incredible when you start looking at the Salton Sea from above how much it is shrinking.  You can literally see old Marina’s that are dried out and hundreds of yards from the beach. It’s no problem for the trailer homes, they just pick-em up and move them down the beach as the water levels drop. 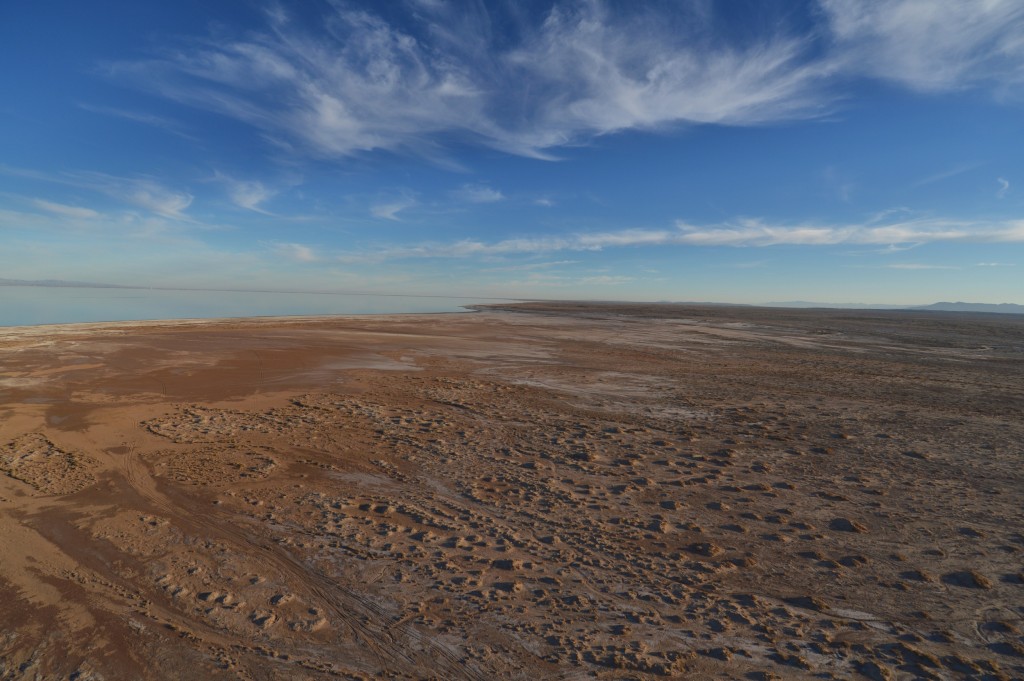 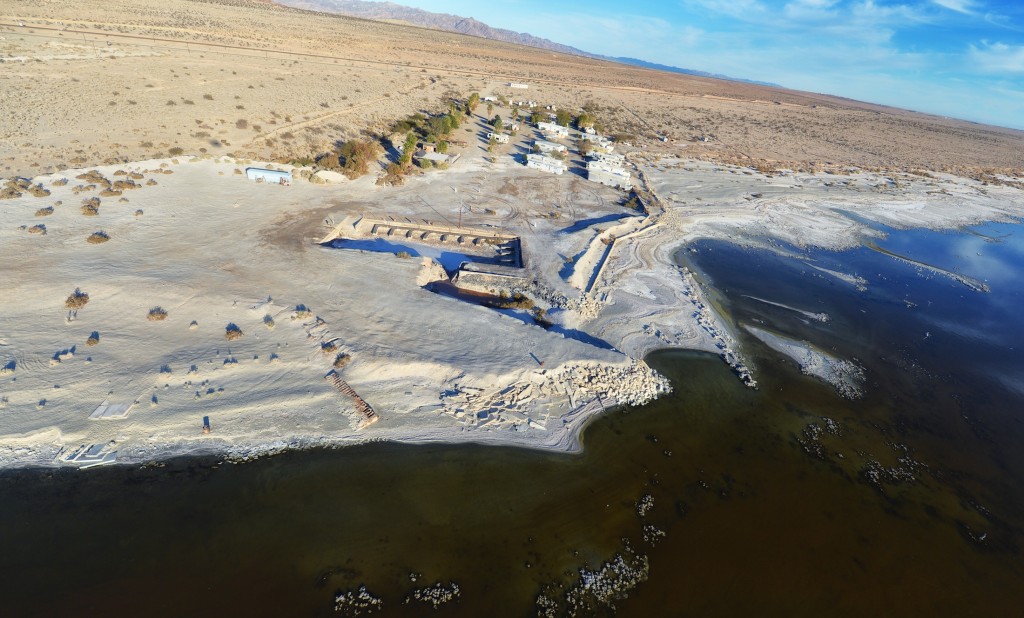 So why did we go to the Salton Sea?  For photographs of course.  For all the bad things about the Salton Sea, one thing is for sure, and that is it is a great day trip from San Diego with great locations for pictures. The best time of day here is Sunrise when the sun comes up over the east shore and sunset when the sun is setting over the west shore.  The best places to photograph there are Bombay Beach, Niland, Salton City and the airport.   I really enjoyed taking photographs there. 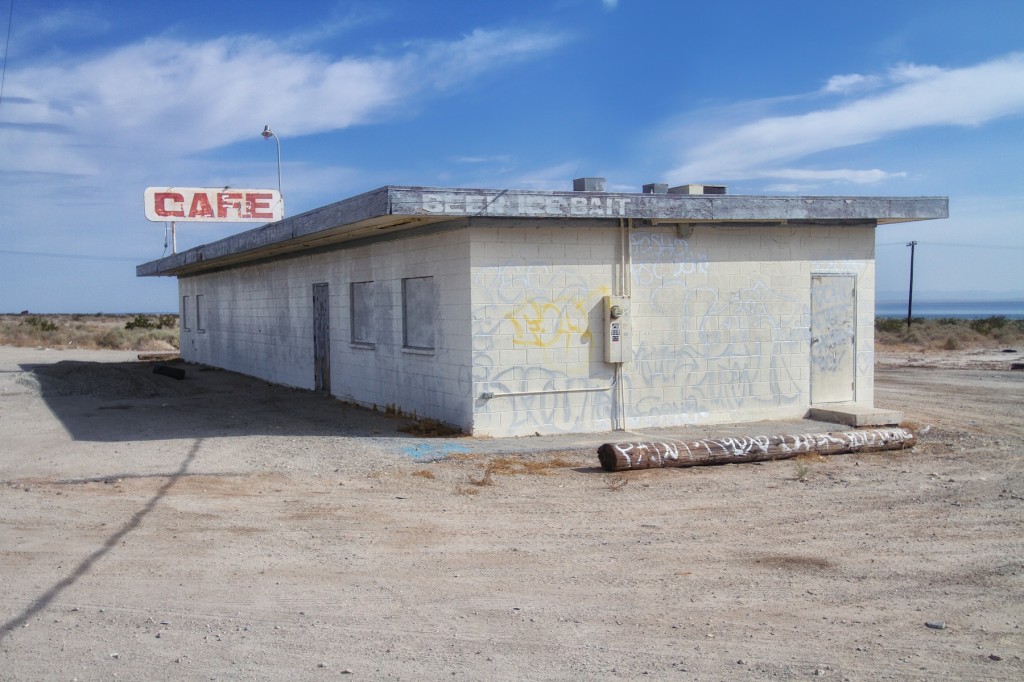 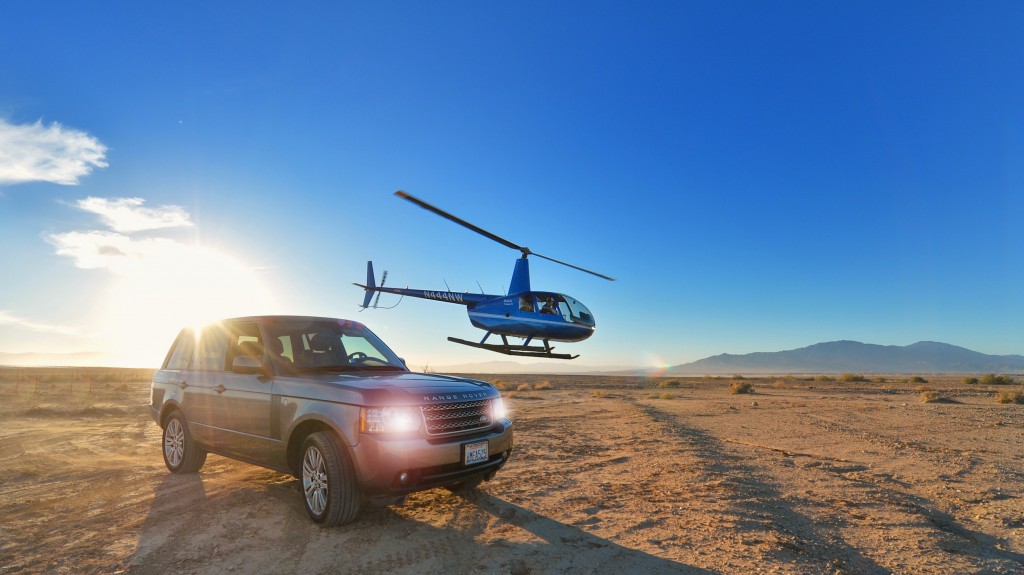 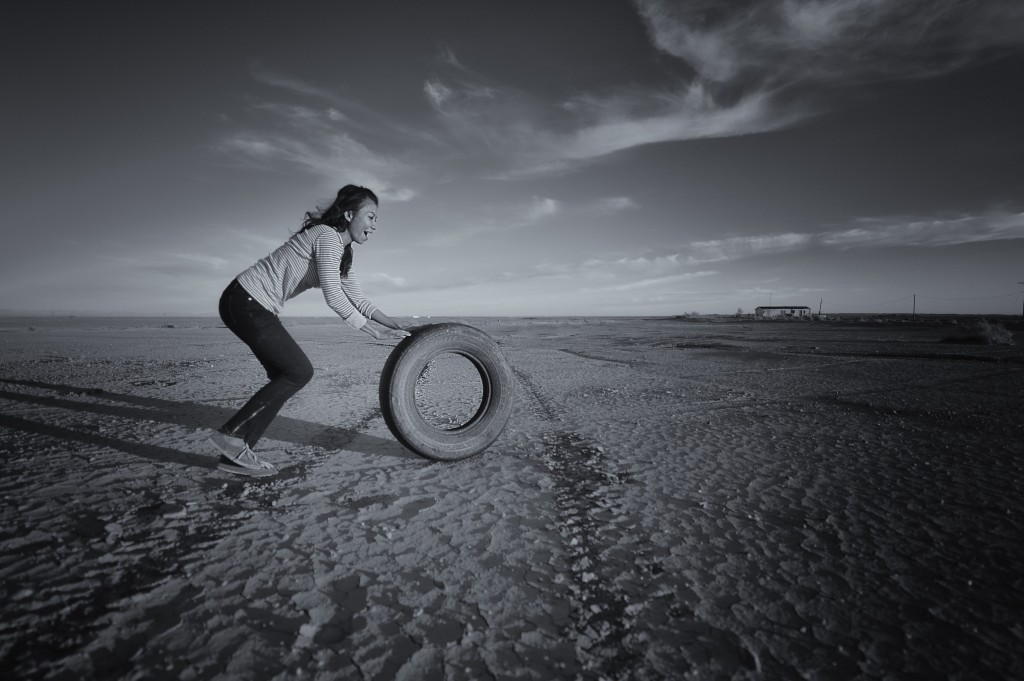 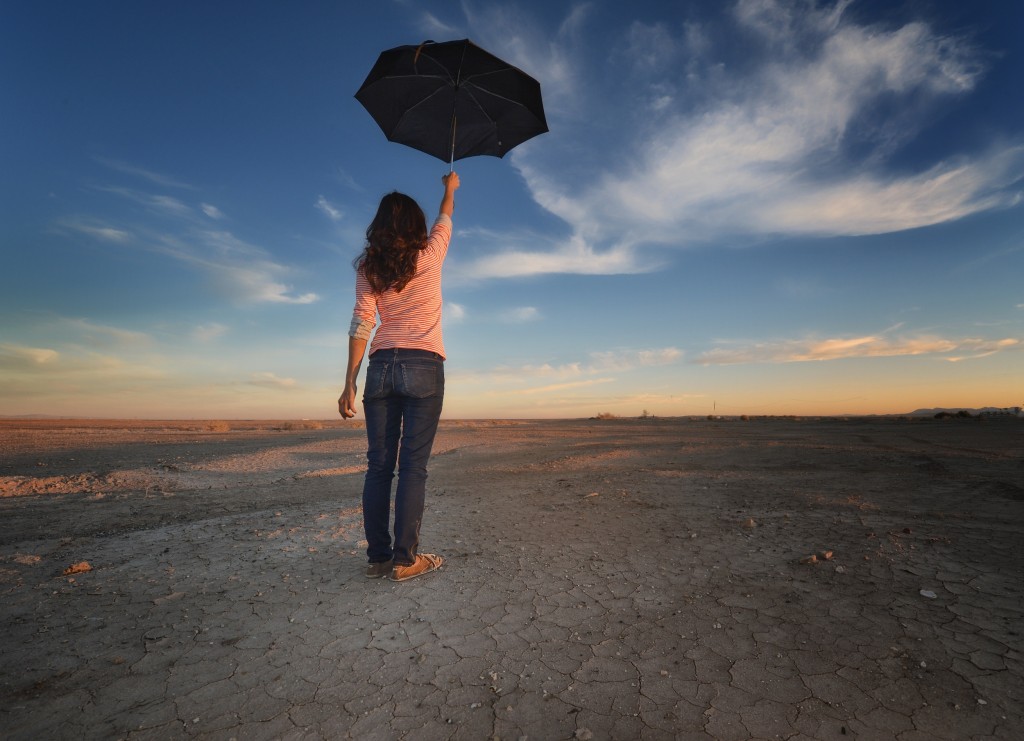 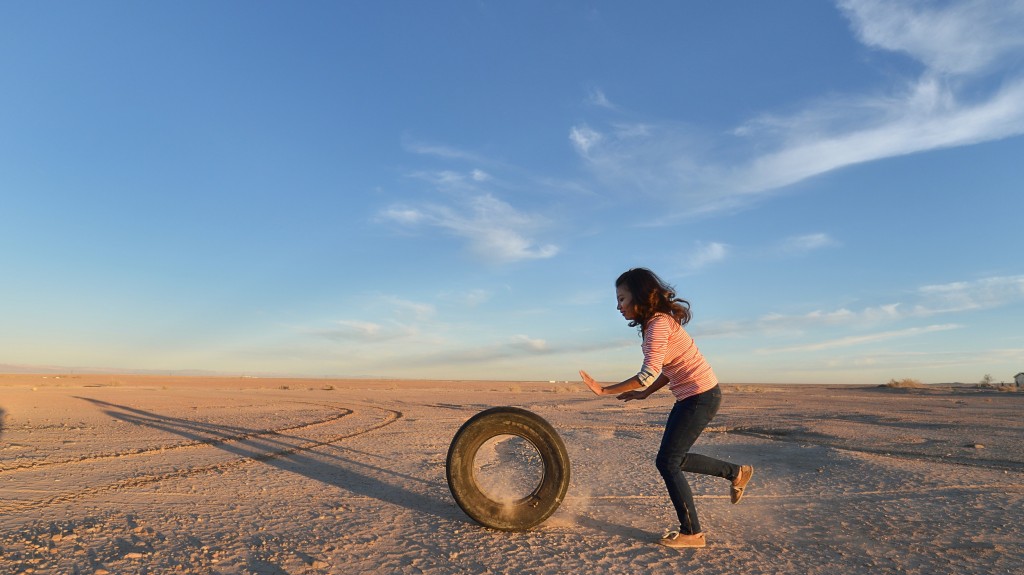 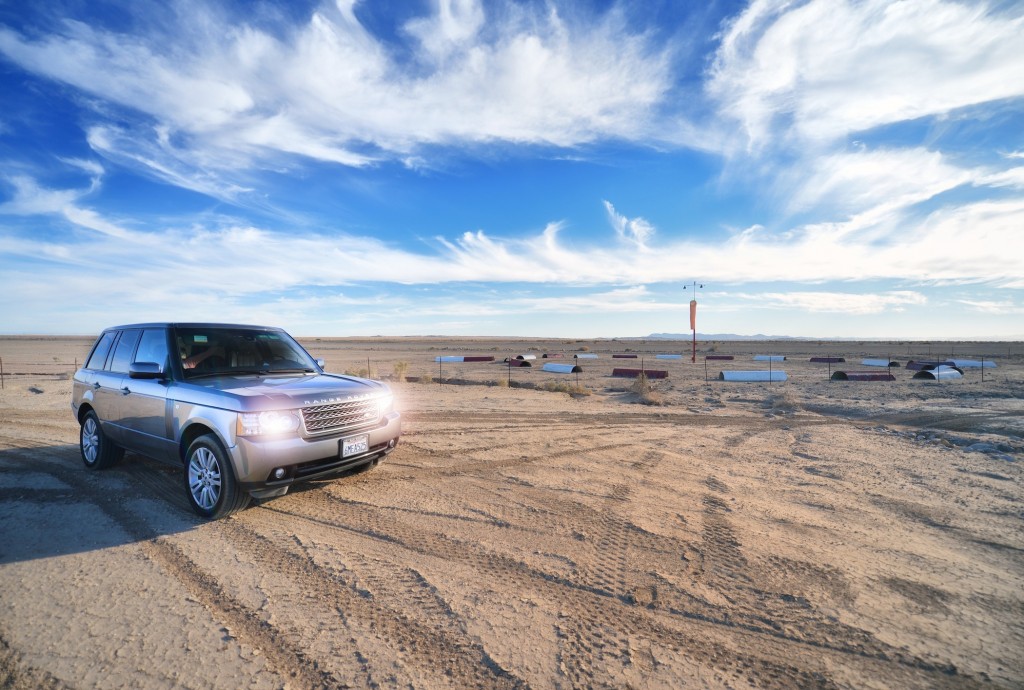 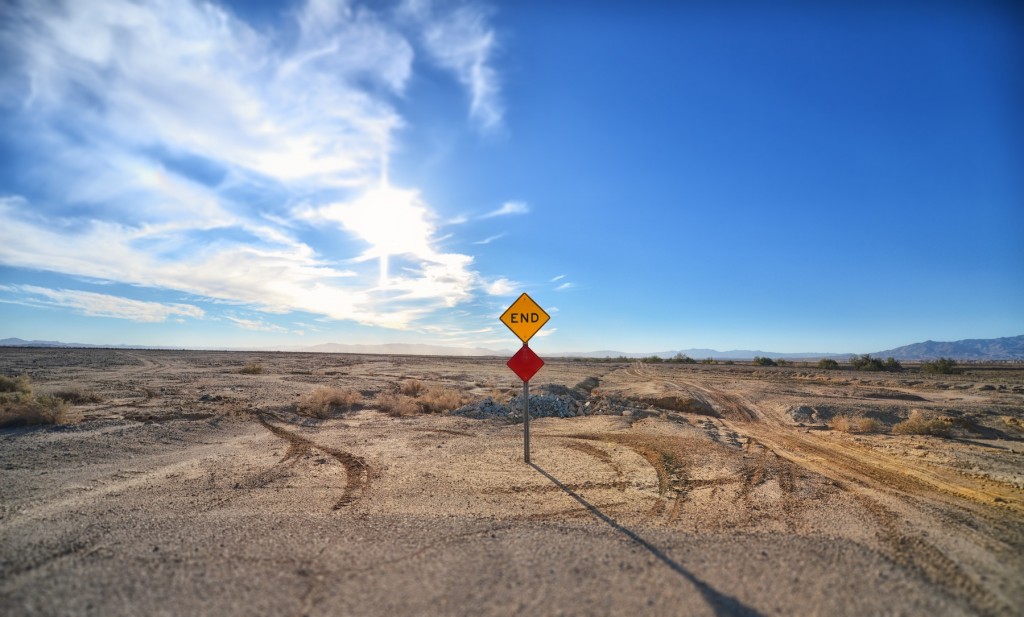