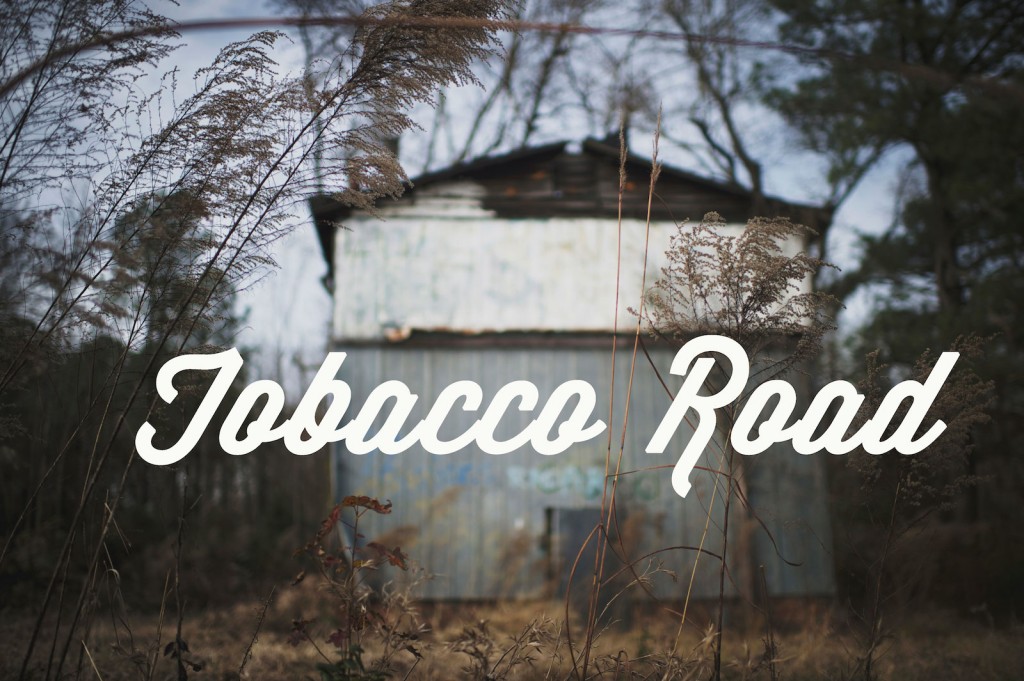 I was trying to find things to photograph.  I had about a day before I had to be in Ohio so I hopped in the rental car and based on a recommendation I traveled down the road less traveled – The 301 South in the rural Carolinas.   I was told to keep my eye out for lots of ramshackle abandoned homes, old plantations and slave quarters that were still standing. I hardly believed that there would be still be old slave quarters left standing in this day and age but I would prove to be wrong by days end.

Take it all the way to Florida

The 301 South runs 1,100 miles from Delaware all the way to Florida.  In the olden days, people would pile in their old cars and make the long trek all the way down to Florida.  The 301 South is a classic old highway that used to be lined with old motels, 1 room restaurants, train tracks, hobo’s – you name it.    But today, its a much different story.   The highway (still beautiful) is lined by very small towns, lots of farms and what appears to be many, many abandoned homes.

Overgrown with weeds and rubbish, this abandoned home had a large sign which said “Trespassers will be prosecuted”. 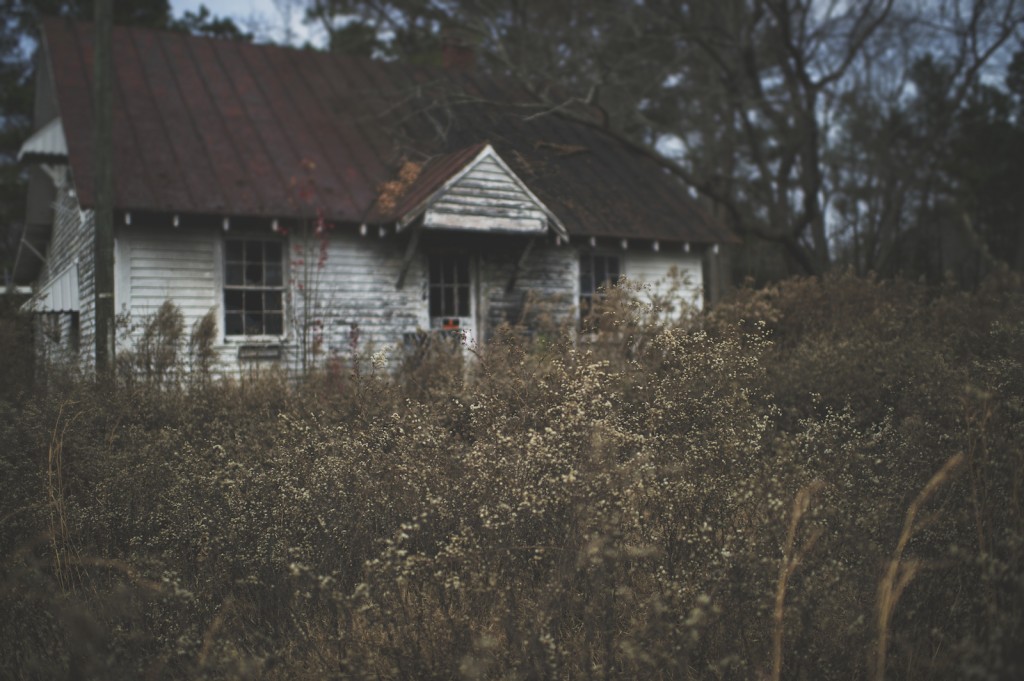 Between 1861 and 1865 about 45,000 North Carolinians lost their lives in the Civil War.  By 1868 the war was over and slaves were free.  Up to that point, most of the area in North Carolina was used for Cotton Farming which was a huge cash crop.    A little over 100 years ago, most of the laborers in the fields that I was driving through,  were slaves.

I got out of the car just North of Wilson North Carolina to walk out to one of the fields which had some interesting building on it.  It was quite curious.  The cotton had just been harvested but little balls of cotton blew over the ground.  It was a beautiful sight.  I came upon this building – beautifully overgrown with weeds.  The door would not open. 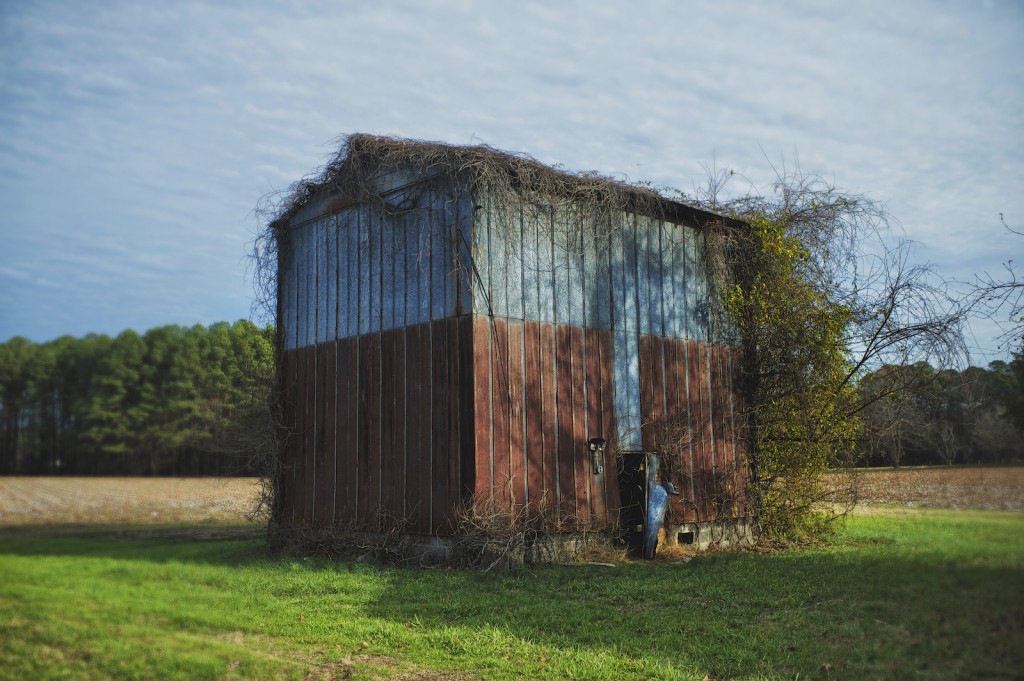 As it turns out.  It was not for cotton at all.  It was an old shack that used to be used to dry tobacco.  These fields were serving a duel purpose for both cotton and tobacco.  Inside the little shack I could see the poles where the tobacco would be hung to dry.  It looked like it had been many years since that had happened. 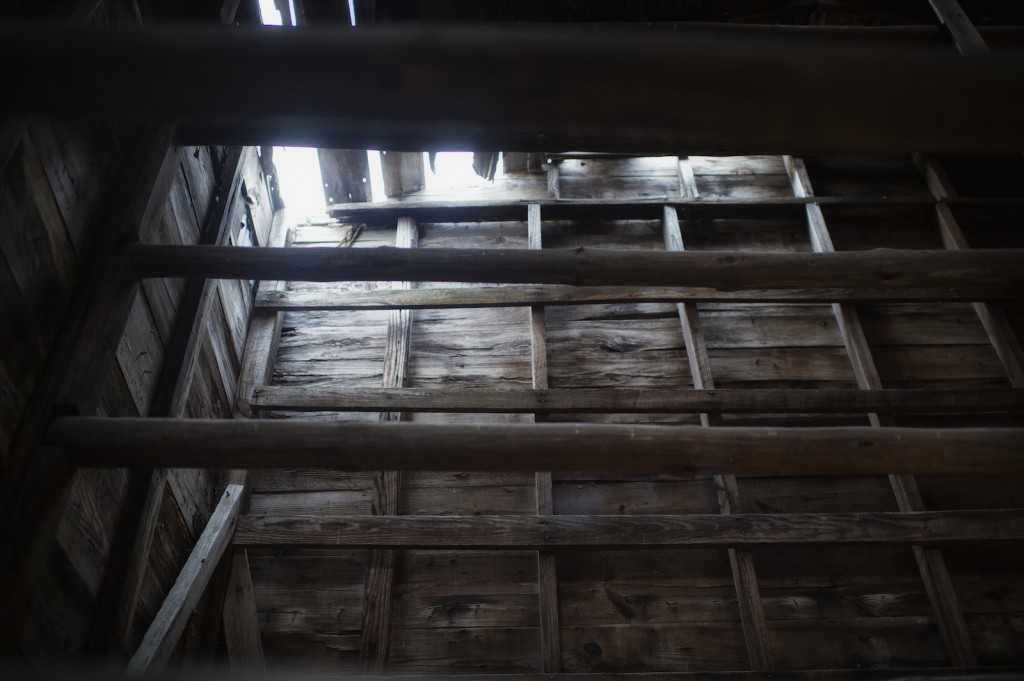 As I walked I saw a small cemetery – just a few gravestones – but further in the distance and old house with an ancient tree next to it.  How curious and beautiful it was.  I kept walking to see what it was.  I had heard that there were old slave quarters (many still standing) in this area.  This certainly looked to be one. 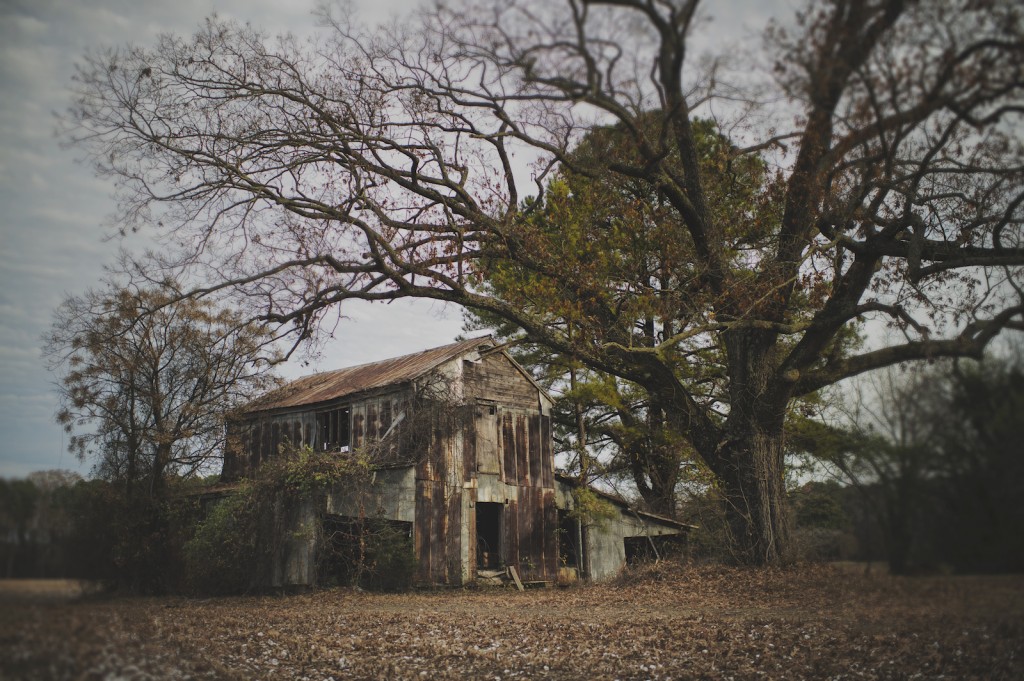 “How odd,” I thought to myself as I looked inside.  It was obviously a dorm room of some type.  Just basic wood planks and a place where people might sleep.  There was even an old ladder to climb to a second floor.  In my mind, I was picturing how horrible it must have been for the poor people that had to live here and work.    It might have been very different here, 150 years ago.   It was a bit shocking actually to see something like this, if I was correct about it was, still standing.

As I drove further down the 301, the minutes turned to hours.  An old train was chugging down the tracks to my left.  For miles we raced each other reaching speeds of 40mph at times.  I would take detours down old roads, later return to the 301 and there was the train.  It was odd that for so many miles, it was just me and train and the occasional pick up truck that would roar by on the other side of the one lane highway.  I imagined not much had changed here for 50 years or more.  Things seemed to happen slower here.

I found many more beautiful Tobacco buildings a long the route.  I liked how worn and colored the buildings looked.  The trees had lost their leaves and the fields were empty making it even a bit more beautiful I suppose. 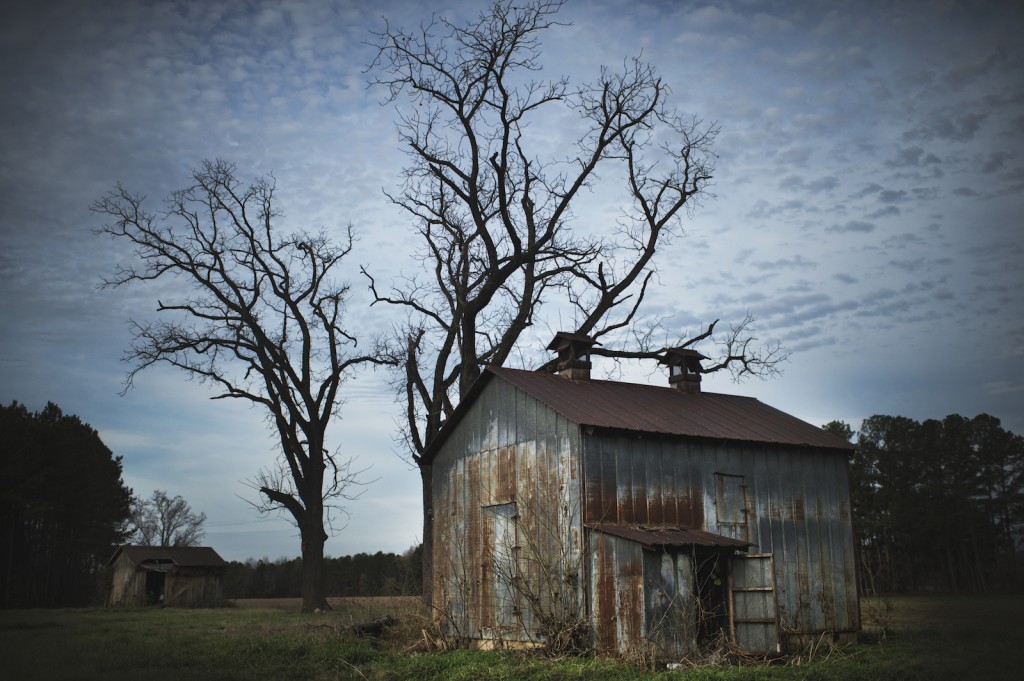 Hidden from view, I spotted this old shack.  Was it creepy, or really beautiful.  Perhaps both. 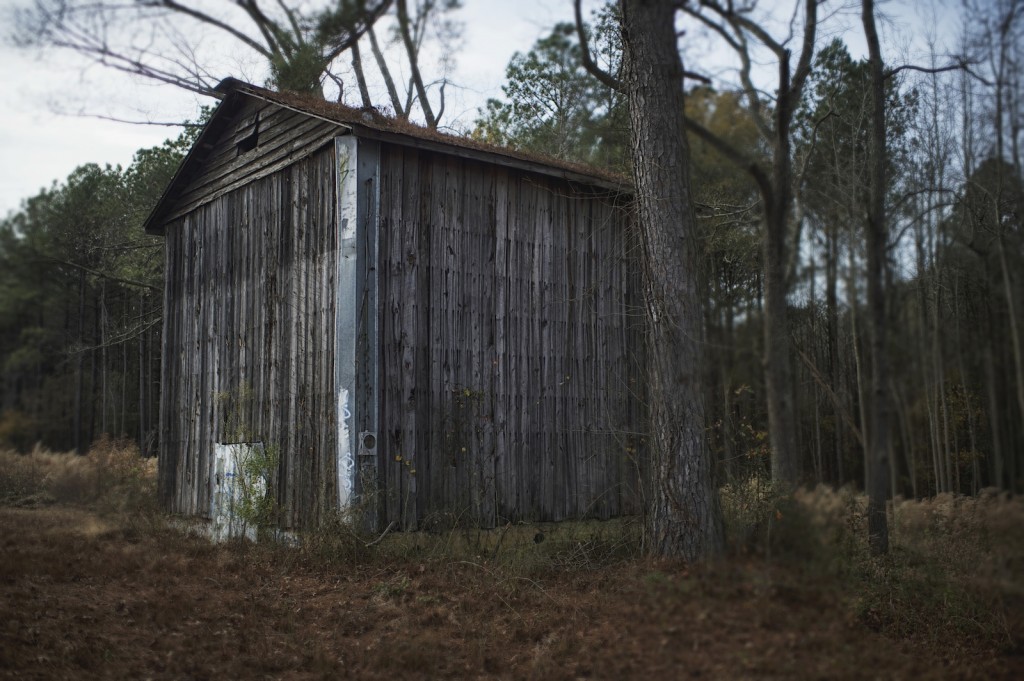 Small fires were lit below the tobacco to dry it out over many days.  That is why these shacks have smoke stacks. 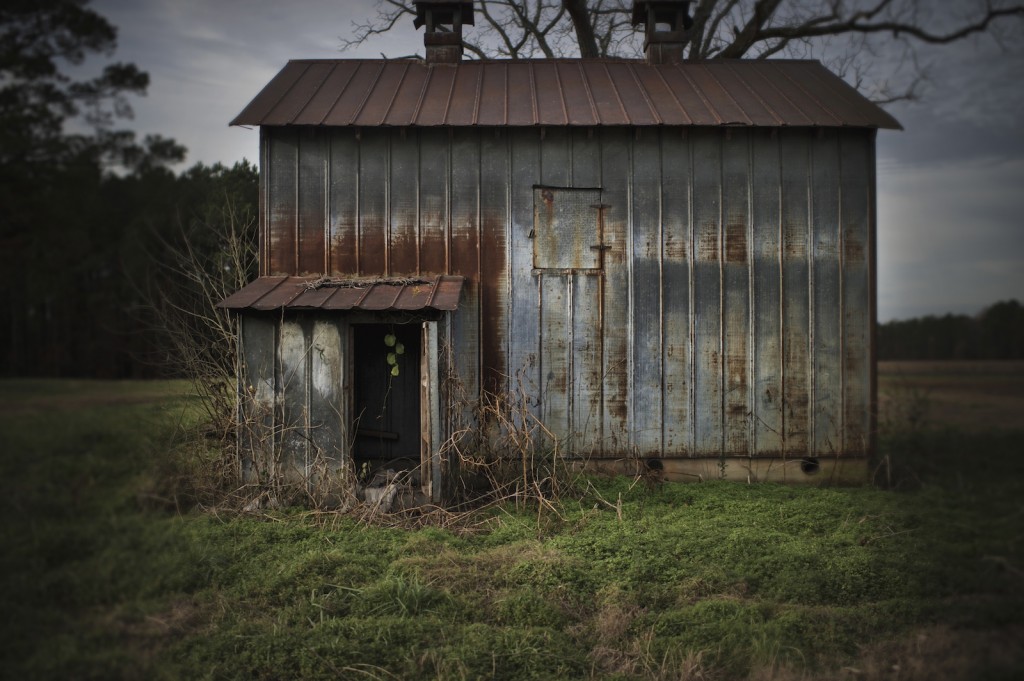 After 6 hours of driving down the roads, I feel like I had seen much of what the 301 South was all about.  It was a beautiful old road, and one that I would highly recommend any photographer to visit and drive through.   As I adjusted my navigation to take me on the larger highways to Raleigh, I noticed a picturesque scene with small horses in the field.  I stopped my car and looked out.  There sure was a lot of beauty here.  This was what the 301 South was all about. 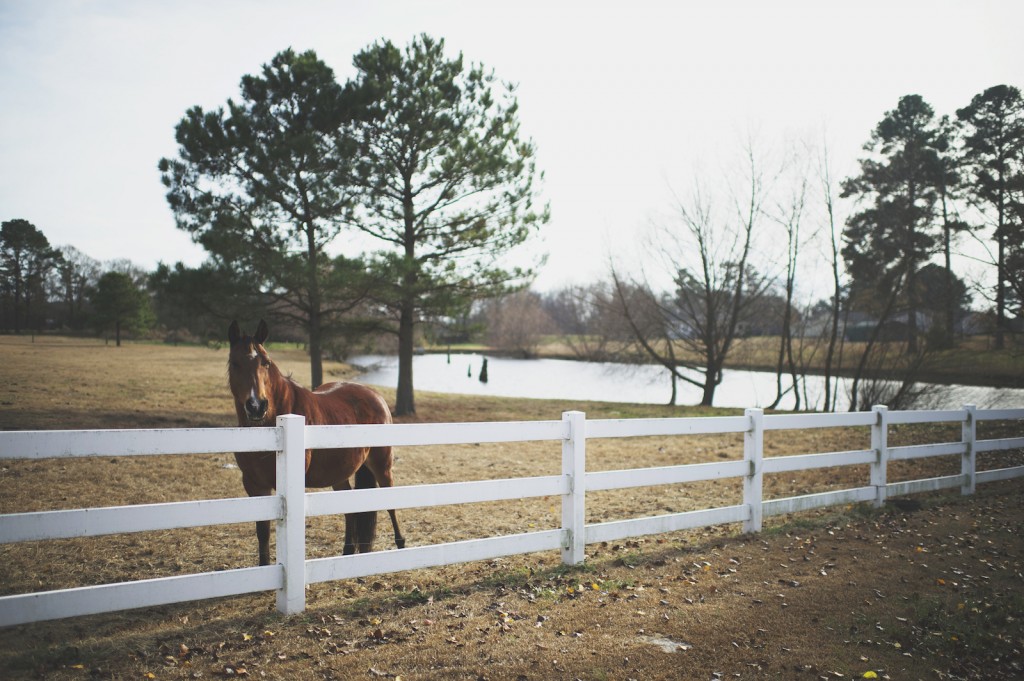