Death of the American French Fry

I was talking to my brother Patrick.  We were growing increasingly concerned about something and we could not hold it in any longer.

Over the years we had witnessed the slow steady decline of the American French Fry and  there was seemingly nothing we could do to stop it.  Everywhere we went, we could not find a decent french fry.   Where were the good french fries?

Did we really think we could improve the French Fry?

You see, we came from a time when a french fry was a french fry and you dipped it in ketchup, saluted the flag, said your prayers, pledged allegiance to the flag and maybe even joined the Boy Scouts.   It was simple.

But over time something changed.  Everyone started monkeying with the french fry.  Putting this on it.  Putting that on it. Cutting the potatoes curiously.

I can’t be sure, when it started but from my recollection the bastardization of the American French Fry began sometime in the mid 90’s.

Maybe it coincided with the emergence of reality TV and all these cooking shows but all of sudden everyone was an expert in improving the french fry.  I like to call it the Gourmet-ification of the French Fry. 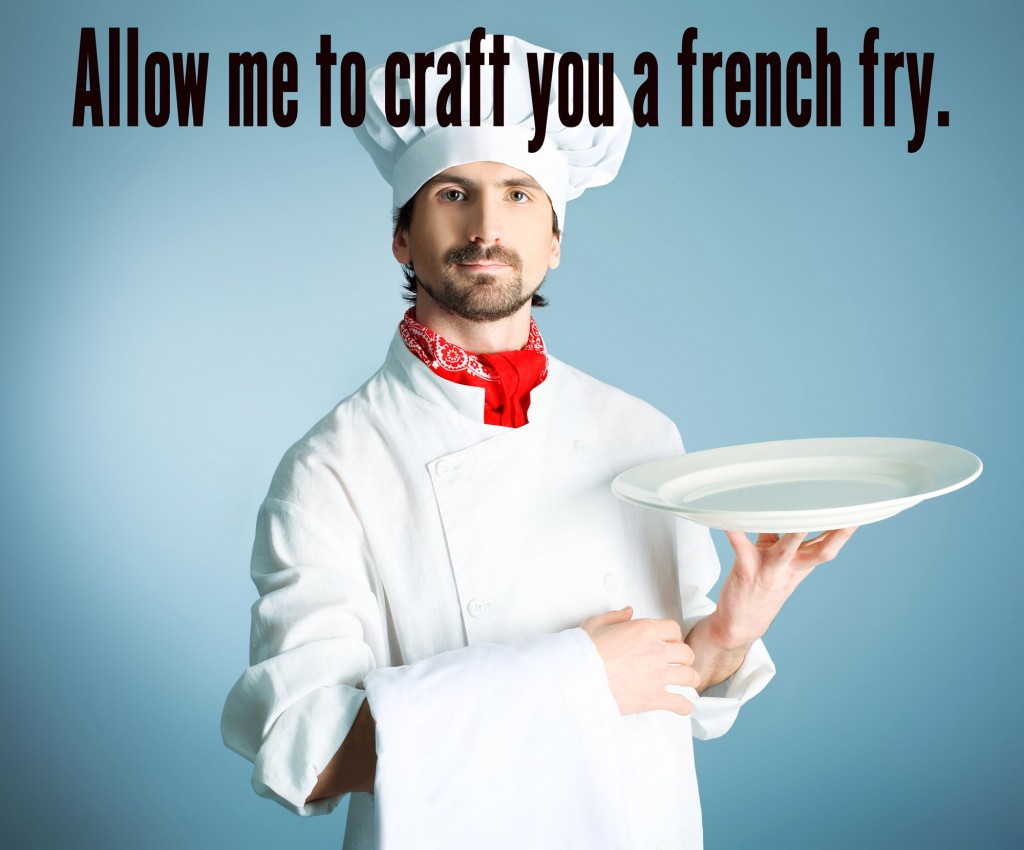 The Dirty 3 Techniques of Destruction

I call them the Dirty 3.  The 3 techniques that were used to improve french fries.  These are the dirty and frankly fraudulent ways fries (and we) are being manipulated.

Dirty Technique 1 – Messing with the Cut

But then, someone got wise ideas.  New crappier cuts were invented in the name of advancement.  The Criss-Cross Cut, the ShoeString cut, the curly cut, the wedge.

I am sure each of these techniques have their fans but you can’t imagine my disappointment when I order fries at a restaurant and get one of these new fancy-smancy cuts.

I can’t tell you how disappointed I am with Curly Cut Fries. 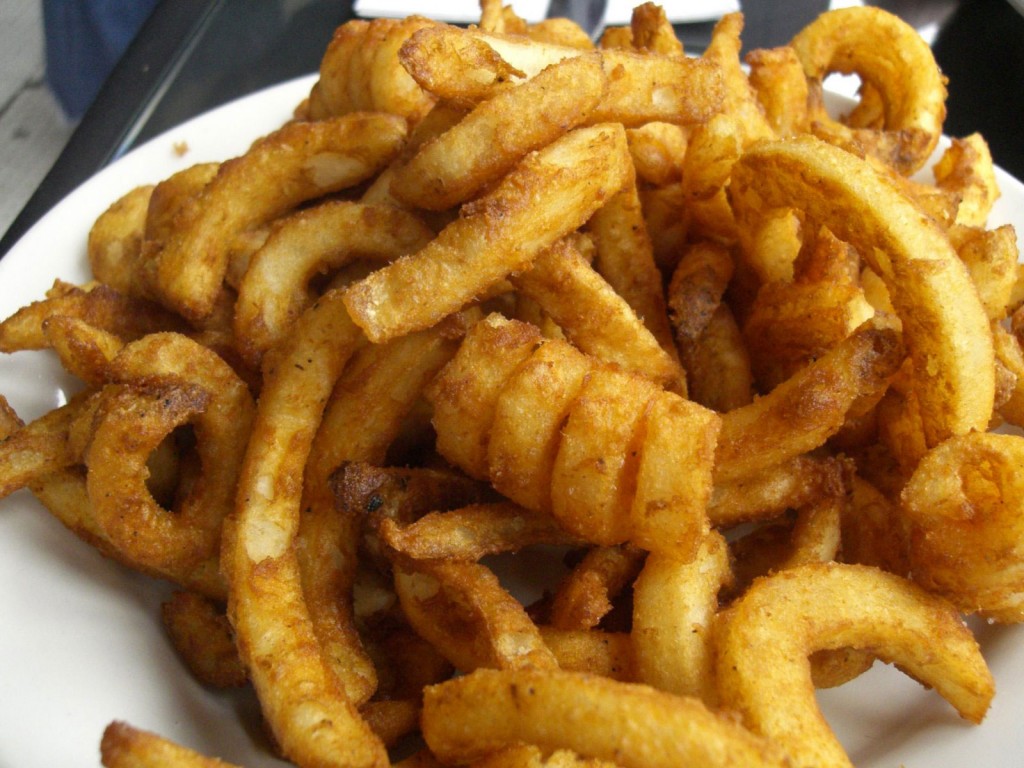 Why do we do this to our french fries? 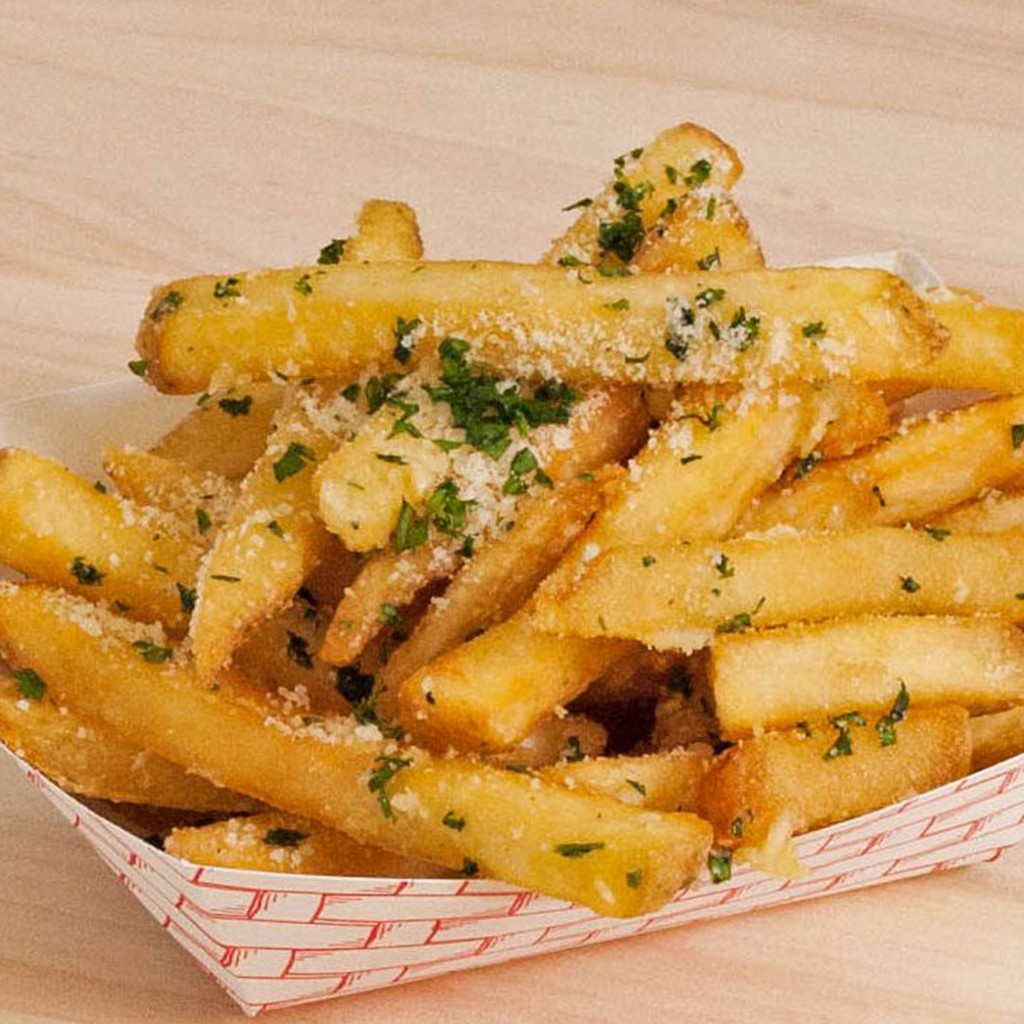 I saved the dirtiest and most dastardly technique for last because it has destroyed more french fries than any other technique- The battering of fries. Yes it actually sounds like a crime, and it is a crime.  This is the technique that almost every major fast food chain has adopted starting in 1997.

Rallys fries are not only battered but spiced too.  What exactly are they hiding under all that? 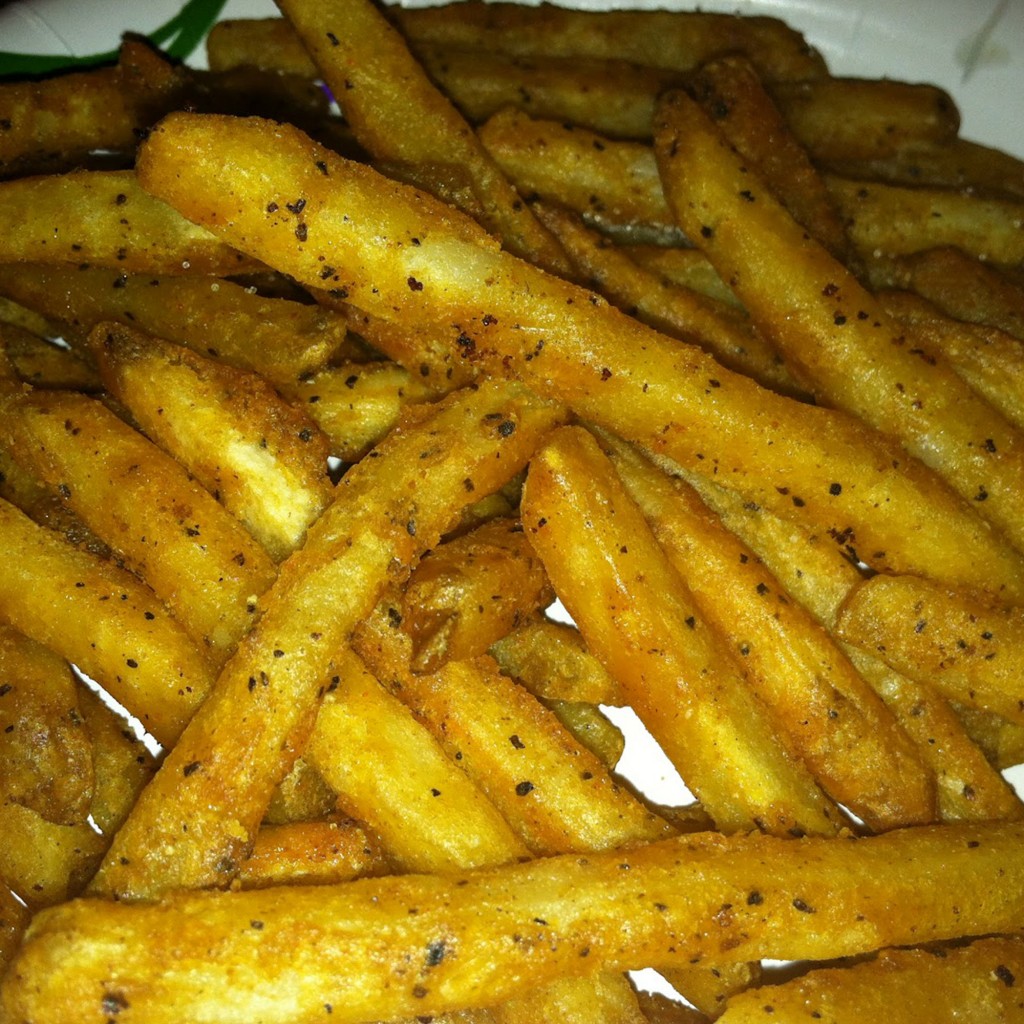 These 3 dirty techniques have all been growing in popularity over the last 15 years.  If you track the progress of the American French Fry in Fast Food you will see an alarming trend.

During 1997, Burger King changed their french fries. Their improved fries were coated with a layer of potato-based starch, which gave the fries a crisp shell that maintained its texture longer.

The company introduced them as “better tasting than McDonalds” and challenged customers to do a taste test side by side comparison.

Despite failing miserably to improve the fry, and not even coming close to beating McDonalds, Burger King never changed their recipe back, electing to continue with that recipe even until today. 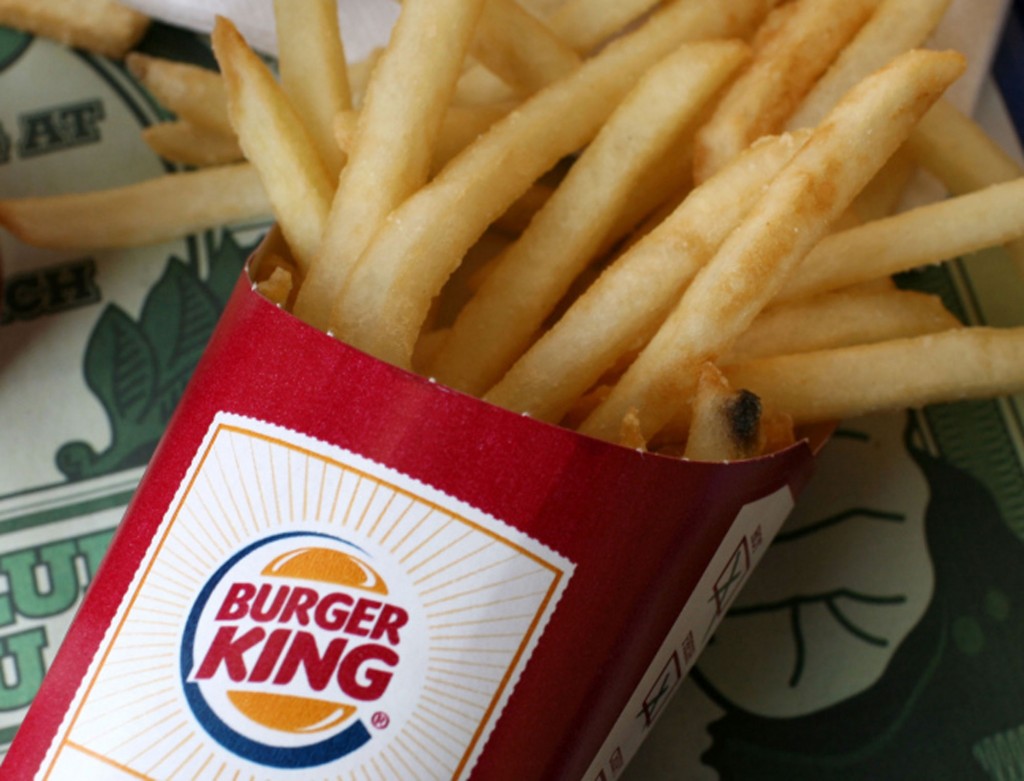 In 2010, Jack in the Box Jacked their Fries Too

In 2010, Jack in the Box jacked their french fries opting out of traditional fries that they had been using for 30 years to the new battered and improved fries coated in batter. What a fiasco.

Jack in the Box really monkeyed with, and destroyed their french fries. 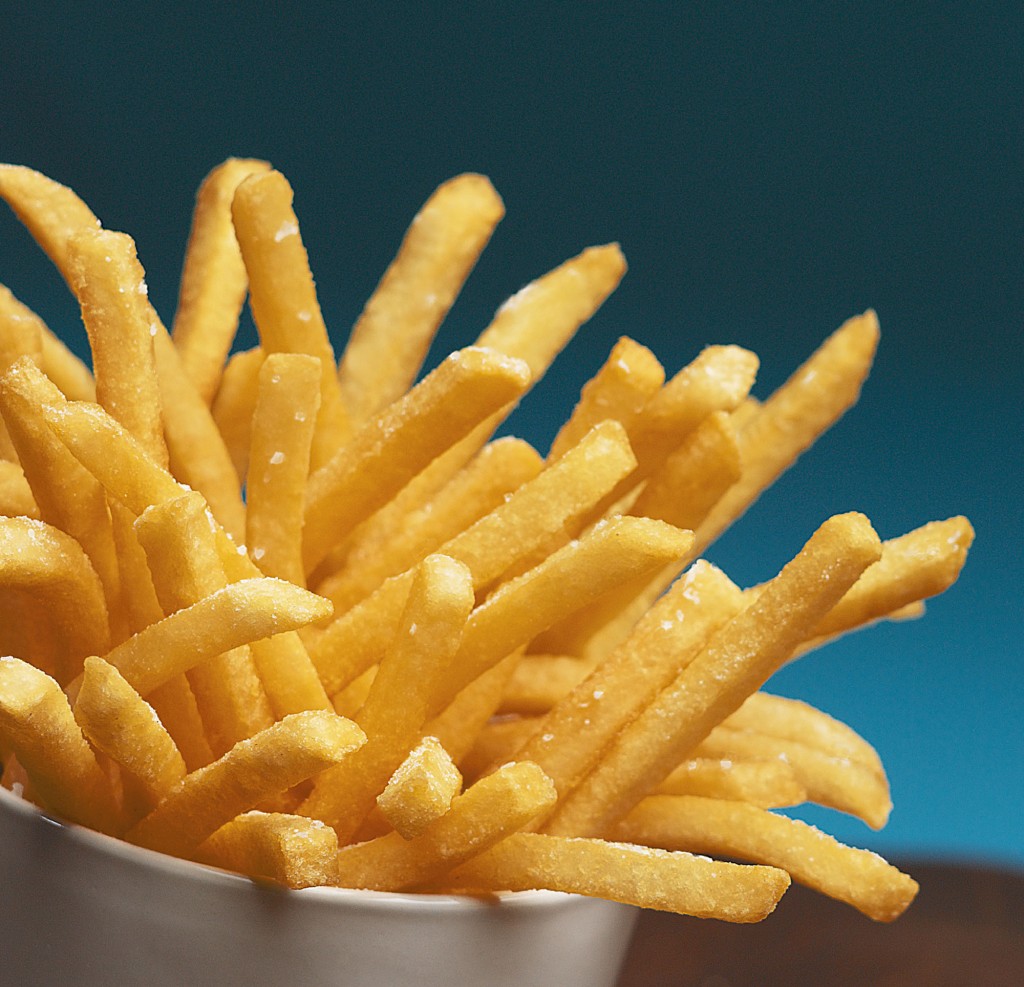 In 2011 Wendy’s (who arguably that absolute best french fries of any fast-food restaurant) decided to “improve” their french fries by abandoning the traditional steak-cut fries that they had always used in favor of natural cut fries.

There is absolutely nothing American about natural cut fries.  I am sure Dave Thomas rolled over in his grave when he saw what the new management team had done to his beloved fries.

“So fresh we leave the skin on.” They say.

In 2013, Burger King nails the coffin shut with a Fry developed by Scientist

The final nail on the coffin for the American French Fry was pounded in by none other than Burger King in October 2013.  Claiming that they had perfected the french fry after 10 years of research and development in the lab they introduced the grand-daddy of crappy fries called the “Satisfry”.  The Satisfry claimed to have 40% less fat and 30% less calories.

How did they achieve such a thing.  The secret was in the creation of a batter which they coat the potato in which absorbs less oil.  Goodbye french fry.  We’ll miss you.

Burger King was so proud of their fries, they temporarily changed their name to “Fries King”.

The Last and Only Hope

This is not an advertisement.  I don’t like everything about McDonalds, but I do think they are the last hope for the American French Fry.  Despite changing their oil, they still stick to the original recipe that Ray Kroc introduced over 50 years ago.

While others have rushed to new trends and techniques to improve their fries. McDonalds has maintained the same recipe. No fancy batter, no spices, no spirals, no criss-cross-cut, no shoe strings just pure and simple french fries. 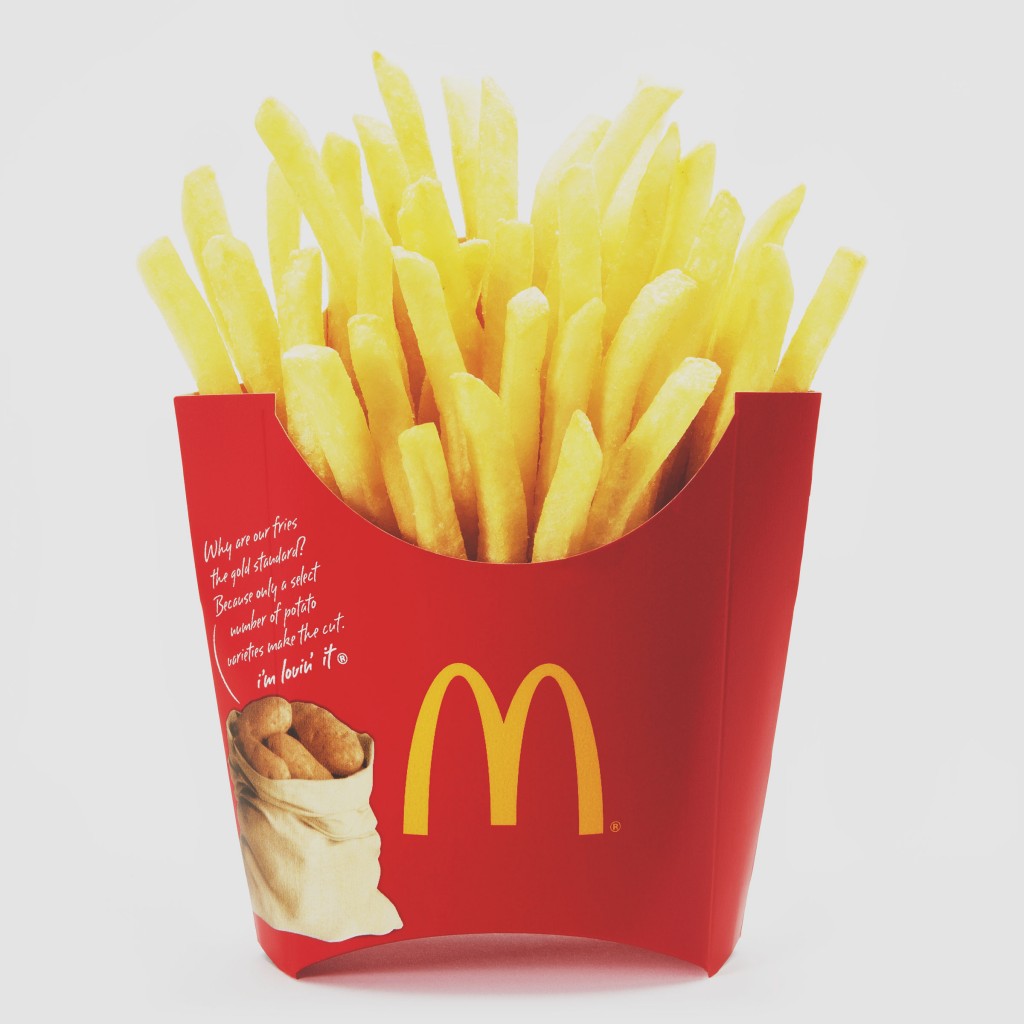